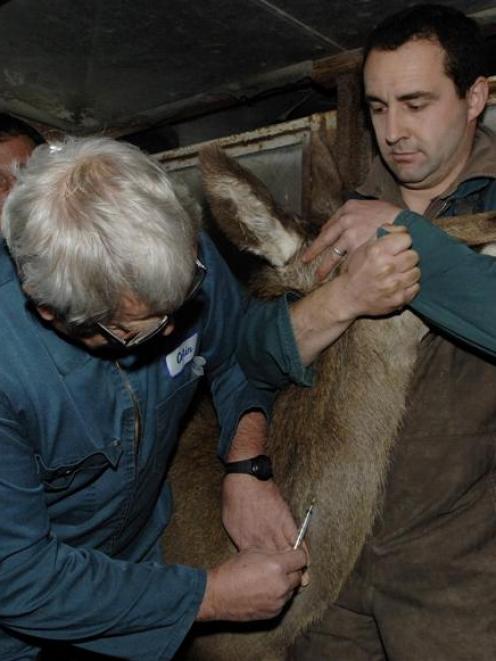 That was one of the messages from Federated Farmers national vice-president William Rolleston as he outlined his thoughts on AgResearch's proposed major restructuring, which will result in 85 jobs at Invermay, near Mosgiel, being relocated to other parts of the country.

While it was going to be tough on scientists and their families who were going to have to move - ''that's always painful, we have to recognise that'' - he believed that, in the long-term, it was a sensible strategy for AgResearch to be clustering itself around the country's two agricultural universities.

It was proposed to have two large campuses, one in Grasslands in Palmerston North and one at Lincoln in Canterbury.

''When you look at agriculture, it's New Zealand's Silicon Valley and Silicon Valley has benefited from the cluster phenomenon,'' Dr Rolleston, a South Canterbury farmer and biotechnologist, said.

However, he did have ''a couple of caveats'' concerning that. The challenges in the strategy would depend on maintaining and enhancing AgResearch's good links with the University of Otago's ''exceptional'' genetics team, and it was also ''absolutely vital'' that Lincoln continued to build its own agricultural capability, a process it began last year.

The downsizing of Invermay must also not result in a reduction of AgResearch's capability in either sheep or deer, he said.

''This isn't about looking to the past. This is about trying to build a strategic capability to best service New Zealand agriculture in the future,'' he said.

In terms of overall strategy, having the recently launched FoodHQ - New Zealand's first food ''supercampus'' based at Massey University's Palmerston North campus - made a lot of sense ''and having AgriHQ, if you like, at Lincoln, also makes sense'', he said.

From those two universities' perspectives, it divided up the strengths in a sensible way as well, but that did not reduce the pain that some people were going to feel in the short term.

AgResearch had made ''a fair bit of investment'' at Invermay recently, there was still capability there and it would remain.

Otago had some ''incredible strengths'', particularly in the biological discipline, and he believed there was still a ''huge amount'' of opportunity for Otago as an academic institution, and for Dunedin to make ''a really big contribution'' to agriculture.

Deer Industry New Zealand producer manager Tony Pearse said the deer group at Invermay had played a major and pivotal part of the New Zealand deer industry's ''rapid rise to the acknowledged world leader in farmed deer that we have today''.

That support extended to the associated expertise in other Invermay areas including animal science and production, soil science, genomics, animal health, biometrics and statistics and scientific integrity in research and the associated technology transfer.

The constructive and ''unique'' relationship that Invermay had with deer farmers, not only in the South but throughout New Zealand and internationally, was ''part of the deer industry fabric''.

Both Deer Industry New Zealand and the New Zealand Deer Farmers Association looked forward to the ''preservation of that heritage'' with the restructuring plans and relocation of positions to continue both with the science integrity and industry commitment that had been shown to deer farming since 1973 when deer research was first initiated at Invermay, Mr Pearse said.

For Central Otago ram breeder Murray Rohloff, everything that he did in his ''daily life'' was affected by research that occurred at Invermay, he said.

He spent eight years working at Invermay as a technical officer in sheep reproduction before leaving to go farming in Southland in 1984. The research centre had made a ''huge contribution'' to agriculture, particularly in the South and, over the years, it had employed some of the hardest-working scientists he had seen, he said.

He recalled the development of oversowing techniques for hill country to get clover established, the involvement with the deer industry which was an ''absolute standout'', and the work done in animal nutrition and breeding.

Beef and Lamb New Zealand's southern South Island director Leon Black said he could understand the concept of bringing various businesses and researchers together but, from a southern point of view, there were some ''technical difficulties'' with the proposal, including Invermay's good working relationship with the University of Otago.

For a long period of time, Invermay had been a centre of science-based knowledge for southern sheep and beef farmers, a place where seminars and field days had been held, and it had been ''our'' centre.

The question was whether 30 people in a scaled-down Invermay could service that and how they intended to connect with farming in the South.

Whether the national benefit potential to be delivered by the proposal would outweigh the loss to the area was yet to be known. The news was ''pretty sad'' for Mosgiel, he said.

Over the years, there had been ''groundbreaking'' work and research undertaken at Invermay, particularly in key areas of reproduction and genetic science.