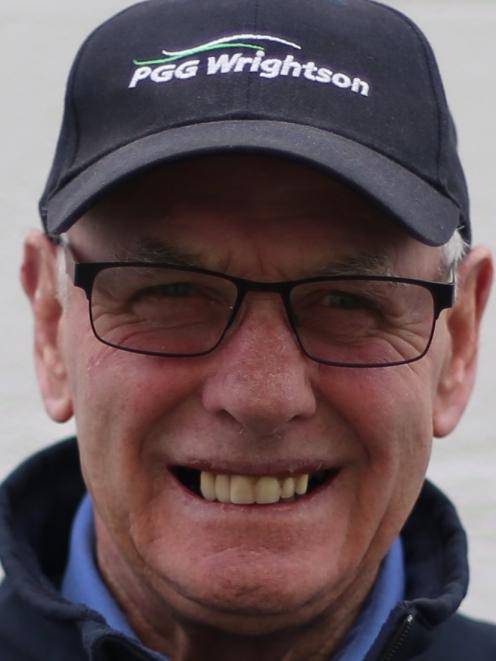 Ingrained in his memory is his time farming a dryland property at Windsor, in North Otago, battling drought and having to sell his sheep in drought sales. It was, he recalls, ''nightmarish stuff'''.

Those challenging times resulted in him later become a driving force behind irrigation development in North Otago.

At 78, Mr Finlay shows no signs of slowing down, as he continues working as a rural sales consultant for PGG Wrightson Real Estate in Oamaru.

But he is standing down this month as a director of the Lower Waitaki Irrigation Company, after a 41 year involvement. Chairman Chris Dennison, who is also standing down at the annual meeting this month, said Mr Finlay's passion for irrigation ran very deep.

As a director, he was full of new ideas and dynamic ways of dealing with problems and his input would be missed.

His contribution had also been selfless. ''This isn't about Dave Finlay, it's about a community,'' Mr Dennison said.

Mr Finlay grew up on a farm at Windsor, one of 11 children, and started shearing in 1954, throughout North Otago and into the fine wool growing areas of the Upper Waitaki and Mackenzie.

He then attended Lincoln College, having done well at St Kevin's College. He chose to do an intensive agriculture course, which meant completing a two year diploma in one year.

Keen for a change in ''thinking patterns'', he found it hard to explain to his mates why he was taking on tertiary study. But he wanted a change and was interested to see what he could learn.

A talented rugby player, he also played ''90 something'' games for North Otago, captaining the team in 1971 and later coaching various sides, including North Otago.

In 1963, it was suggested that Mr Finlay buy a farm and he bought a 130ha bareland block at Windsor. There were two floods that year, followed by drought in 1964.

It was demoralising for the young farmer, who felt like he was ''hitting his head up against a brick wall''.

The spectre of drought eventually saw him look over the hill to the Lower Waitaki plains, where irrigation was being talked about.

The Steward Settlement water race was completed in 1912 to serve about 2600ha on the plains and the North Otago Progress League had been operating an irrigation demonstration farm, but formation of the Lower Waitaki Development Committee in 1962 was the first serious attempt to promote irrigation.

By November 1969, 156 farmers had voted in favour of the government constructing a $2.25 million scheme.

Construction began in November the following year, the first water was supplied to farmers in September 1974 and all work was completed by March 1982.

During the 1980s, the government undertook a review of its involvement in irrigation and decided the government schemes would be sold to local communities.

The Lower Waitaki Irrigation Company was formed as an unlisted public company in 1989 and it bought the scheme for about $1 million. It now irrigates about 20,000ha.

When Mr Finlay initially saw the demonstration area and what could happen with water, coming from a dryland farm and having been forced to sell sheep, he was blown away.

He and two others bought a 430ha farm on the plains which, at that time, had about 30ha of irrigation with water from the Steward scheme.

When he first shifted to the plains, it was impossible to dig a hole in the ground on the property; the only tools that could be used in the stones were crowbar and pick axe. It was marginal, virgin land on which nothing could be done without water.

But then the countryside began to transform from brown to green with the advent of irrigation in the area. Sheep and beef cattle largely gave way to dairy cattle and Mr Finlay, in equity arrangements, bought additional properties.

The lower Waitaki scheme was largely achieved under the leadership of Sid Hurst, someone who never sought praise, as that was not in his nature. But he wanted water and he got that water, Mr Finlay said.

The government of the day was also directly interested in farming and irrigation and backed it.

There were other changes over the years, not just in land use, but in the move away from border dykes to spray irrigation, for more efficient application.

There were three soil types on the plains and each had different water requirements, which needed to be recognised, he said.

Mr Finlay, who has also been involved with other irrigation schemes in North Otago, said irrigation was not about having dairy cows; it was about making plants grow. Dairying was a good way to utilise the product from irrigation.

His long term vision was to see all of North Otago irrigated and he wanted to make sure everyone was aware of the opportunity.

People's democratic right to say ''no'' also had to be respected, but everyone needed the opportunity to talk about it and every part of the district should have the opportunity for water.

He saw his role as standing up for people who were missing out, and making them aware, and he would ''never give up the fight''.

While he had no real answer why he did that, he said if he was rung by someone from any irrigation scheme in the country and asked for a hand, he would ''go straight away''.

''I just see water as the ingredient that's missing. Put it there and the rest will look after itself. What the product is will just happen as a result of need. End of story.''