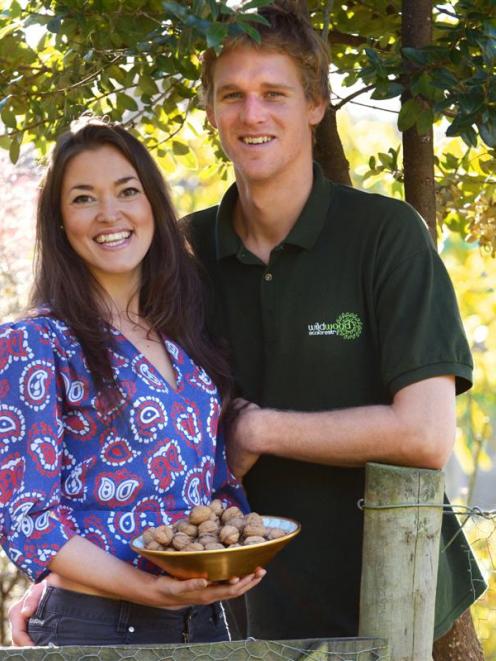 Loveday Why and Kris Mullen share a passion for a healthy, sustainable lifestyle. Photo by Gerard O'Brien.
It reads a little like something out of a Mills and Boon romance novel.

In 2008, Englishwoman Loveday Why met Dunedin-born Kris Mullen in Australia and, within a week, they were living together in a tiny hut in a forest at Shag Point.

They later travelled, married and have now settled in the Dunedin area where they are developing two businesses - native tree planting business Wildwood Ecoforestry and healthy eating initiative Wild and Good.

Mr Mullen (28) has always had a passion for native forestry and reforestation.

He was now working with mostly private landowners who wanted ''mini forests'' in the Dunedin area, and Wanaka-Queenstown.

He was planting everything from low-growing natives like flax and toe toe, through to the 'beautiful big forest giants' like the totara. He has expanded to planting fruit and nut trees, a nod to the couple's passion for healthy eating.

He has also been planting native trees on Department of Conservation-approved reserve land, keen to show people the benefits of plantings.

They believed in the importance of native trees for carbon capture, ecosystem regeneration, waterway filtration and erosion control, as well as a habitat for birdlife.

Ms Why (30) came from a different background. Originally from Essex, she studied English literature at university.

She experienced ill health for about 10 years, which was diagnosed as chronic fatigue syndrome.

She started experimenting with different foods, trying to get rid of toxins in her diet.

After 18 months eating raw vegan food, the symptoms ''dropped away''. Despite doing a master's degree at the time, she decided to go travelling when she felt she had ''finally kicked'' her illness - and that was when she met her future husband.

She now had one year left to complete a PhD in contemporary ecopoetics at the University of Otago.

Wild and Good started as a blog, sharing recipes, ideas and tips for healthy living.

She had already had some clients for food consultancy and hadcatered for several events.

Ms Why had ''no regrets'' about moving to the other side of the world and her subsequent lifestyle.

''I imagine, if I hadn't, I'd be working in a bookshop in London, probably having fun but not really flourishing. This is my place,'' she said.

The couple were looking for a base which they could reforest for themselves, establish an orchard and make it a base for both their projects.

They were keen to bring in groups and get more children involved to show people what was possible and get them engaged.

Mr Mullen was keen on planting as many edible forest gardens as he could. He was getting a 35m-long, two-storey glasshouse where he was going to plant the likes of mango, paw paw and avocado.

They were also looking for backers for a Trees in Schools project, aiming to plant low-maintenance, spray-free edible trees and shrubs in low-decile schools.