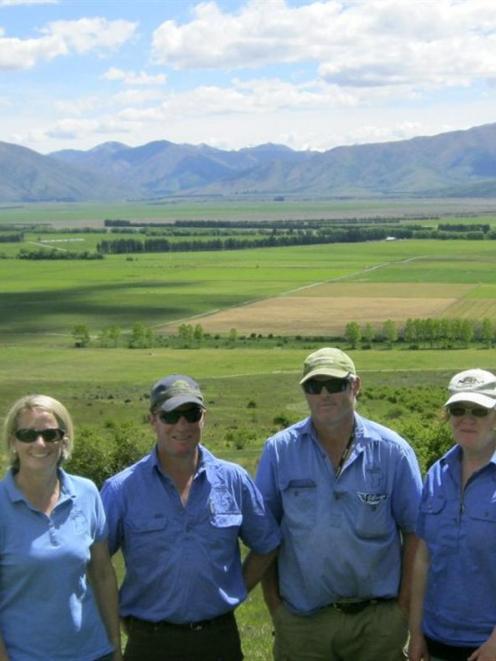 The couple farm Omarama Station, a property of nearly 12,000ha, which has been in Mrs Subtil's family since 1919.

When it came to entering the farm awards, Mr Subtil said there were several reasons why they put their names forward.

The couple have been involved with the Platinum Primary Producers (PPP) Group, a transtasman group which provided a forum for producers and professionals to discuss issues affecting the agricultural industry.

At last year's PPP conference, there was a consistent theme that positive stories around agriculture did not seem to ''make the grade'' and farmers were encouraged to ''put ourselves out there a bit more'', Mr Subtil said.

While there was lots of press around the likes of ''dirty dairying'', there was a different reality that often did not get highlighted, he said.

There was also the opportunity for the couple to be ''put through the wringer'' with the judging process.

''Sometimes farmers get stuck in their grass castle and look inward, rather than taking a look from outside,'' he said.

They met some great people and enjoyed the awards dinner, which was also attended by their two children, Emma (17) and Henry (15), and Mr Subtil's parents, who live in the UK.

Omarama Station, originally 74,000ha, was first settled in 1858 but was divided into 10 runs in 1915. In 1919, Mrs Subtil's grandfather, Wilfred Wardell, and his brother Cecil bought the 11,800ha homestead block of Omarama Station.

Mrs Subtil grew up on Omarama Station, which was later farmed by her parents Dick and Beth Wardell.

Mr Subtil grew up on a farm in England comprising sheep, beef and pigs and a farm shop.

It was a small operation, which went from ''start to finish'' in terms of the meat that was produced and sold from the property.

The couple later lived in the Middle East and Malaysia, where Mr Subtil worked for a logistics company, which proved to be a very valuable experience. They returned to Omarama and took over the property in 1998.

While there were a lot of fundamentals in farming that overlapped - ''feeding and breeding, isn't it?'' - the specialisation of fine wool was a big learning curve for Mr Subtil, along with the scale of the property.

But they had a lot of help from Mrs Subtil's parents and also learned from those that worked for them.

While they had done a lot of development work, there was a great base to start with, Mr Subtil said.

The property wintered 23,000 stock units, including 7500 merino ewes and 310 Angus-Hereford cows. About 10,000 lambs and 700 steers and heifers were finished annually. Their beef was destined for a Japanese restaurant chain.

Mr Subtil remained passionate about merino sheep, saying the merino operation was very profitable and that was one of the things highlighted by the farm environment award judges.

That was another reason for entering, as sometimes it felt like there was ''only one size'' for agriculture. There were plenty of opportunities for alternatives to milking cows, he said.

Production had risen significantly since the installation of a centre-pivot irrigation system that now covered 560ha, of which 120ha was leased to neighbouring farmer David Ellis.

They were now doing dryland development with a view to having dryland lucerne to add value to their existing stock. The couple also run a homestay business.

They have worked with local iwi and the Department of Conservation for the past 11 years to promote the regeneration of the native longfin eel population.

Omarama was a special area in which to farm and they were aware that farmers in the area were ''right in the microscope''.

It was about striking a balance, and finding ''room for everybody'' that ensured the continuation of a viable and healthy community.

They loved the area and the diversity of people and interests and felt very lucky to be there, Mr Subtil said.

Production and financial performance were ''industry leading'', while the Subtils were also commended for their staff management, industry leadership and community involvement.