Primary industry cause of international envy 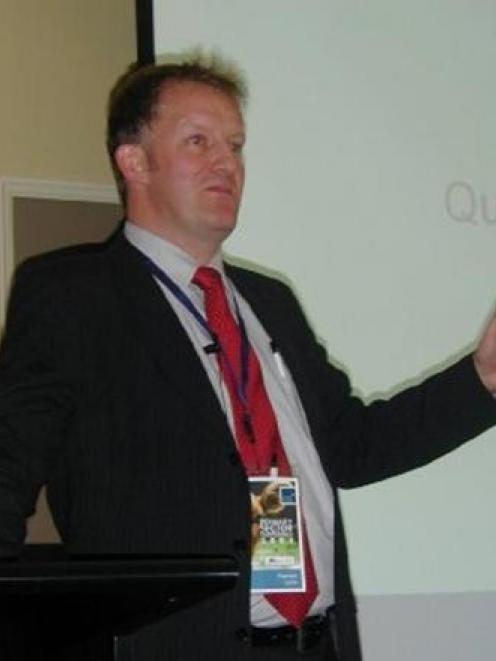 Food marketing specialist Prof Hamish Gow, of Michigan State University, addresses the recent conference of the New Zealand Institute of Primary Industry Management.
Farmers may not feel it, but New Zealand's primary industry is viewed with envy by its counterparts around the world.

The primary sector has increased its contribution to New Zealand's gross domestic product (GDP) from 14% in 1986 to 17% today, something Associate Prof Hamish Gow, an ex-patriate New Zealander now a leading United States food marketing specialist, said had not been achieved elsewhere.

Prof Gow, of Michigan State University, told the recent New Zealand Institute of Primary Industry Management conference in Queenstown that farmers throughout the world were trying to develop branded marketing channels, but itwas not easily achieved because they could not get industry unity.

Despite that, Prof Gow believed New Zealand's primary sector had done well, although the models used needed some improving.

The key was to concentrate on strategy not structure.

He gave the example of New Zealand apple growers who, in the process of remodelling the sector's structure, sold off the profitable juicing business and lost control of the industry.

A strategy had to create value and provide consumers with what they wanted, he said.

Mexican-made Corona beer was a low-cost product, but had been successfully marketed to affluent US college graduates as a reminder of their fun-filled spring breaks in Mexico.

Equally, Guinness beer was marketed as an Irish experience, and around that Irish-themed pubs had been created.

Traditional commodity supply chains did not allow that type of marketing.

They did not provide information, attribution or experience, with product value often left on farms.

Prof Gow said a product's value came from integrity and a co-ordinated supply chain which added value and sold at a higher price.

Yoghurt was an example, he said, where companies such as Danone had created functional, branded products from a commodity such as yoghurt.

The international food company sold Nutriday yoghurt based on its nutritional attributes and Yogisip as a drinkable yoghurt.

To adopt such a marketing structure around a biological system initially required inspirational leadership to create unity and focus.

The customer also had to be identified.

Prof Gow said retailers were considered gate keepers - not customers who were end-users.

Once the customer was identified, Prof Gow said appropriate technology, production and processes needed to be developed to meet their requirements.

Another key was to control and co-ordinate the supply channel and added value stages, but that did not mean owning bricks and mortar.

He gave the example of a US farm, Niman Ranch, in California.

In the late 1960s and early 1970s, Bill Niman saw an opportunity to develop and market sustainable, natural food.

Faced with the usual issue of little capital, Mr Niman decided to leverage off other people.

He started working with chefs in affluent restaurants and supplied beef from his own farm and later pork.

Such was the quality of his product and service, the restaurants started identifying and carrying his brand on their menus.

"He was able to get to foodies by having a relationship with chefs. He only worked at the top end and he ensured they were given top quality product."

Through that relationship, restaurants and his customers started telling his story and promoting his brand free.

Business started growing and he added direct sales through catalogues, online promotion and ordering and cook books, with a promise to deliver orders within 48 hours.

Restaurants were able to provide Niman Ranch with the names of customers and any that had a bad experience were followed up by phone.

"It's high-touch but it's a product that sells for a premium price."

Niman Ranch was a co-operative and in recent years the business had grown at 35% a year and demand for naturally farmed pork has seen the number of pig farmers grow from 50 in 1998 to 500 today.