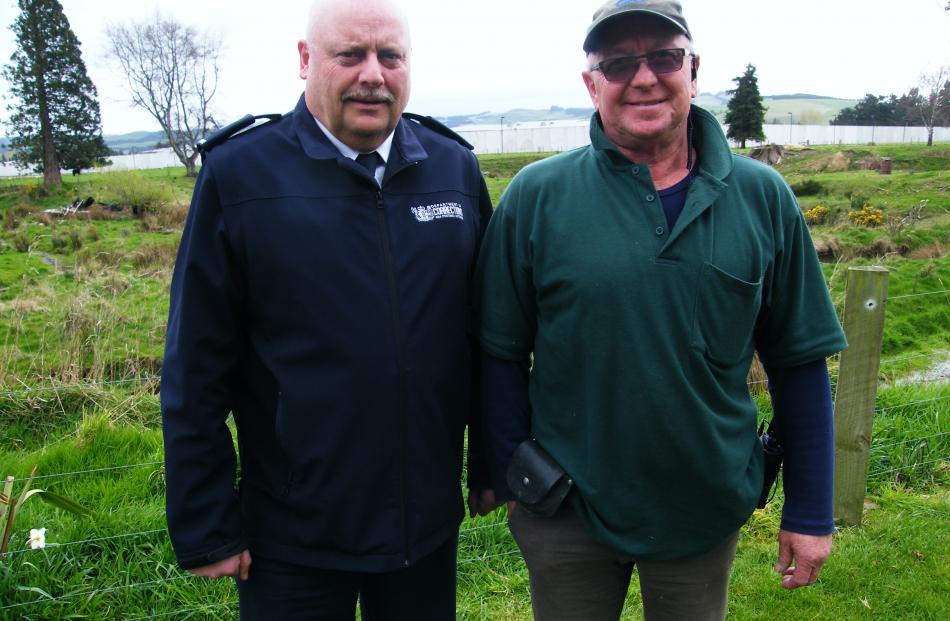 Otago Corrections Facility manager Jack Harrison (left) and dairy farm principal instructor Tony Russell on the farm near Milton. The prison is visible in the background. Photo by Timothy Brown

The entranceway to the 21st century edifice which occupies a 60ha site outside Milton is the last landmark before tarseal gives way to gravel on Narrowdale Rd.

Just around the corner, two large gum trees stand guard at the entrance to a dairy farm and down the driveway workers can be seen performing their daily tasks.

They look like workers on any dairy farm, but at the end of the working day these workers will return to that edifice in the distance because this is the Otago Corrections Facility's dairy farm.

At the end of the driveway, I am greeted by the dairy farm's principal instructor, Tony Russell.

He takes me into the converted homestead, which acts as a smoko and training room, where we are joined by Otago Corrections Facility prison manager Jack Harrison.

The 125ha farm is milking about 360 cows this year and about 15 prisoners now get the opportunity to work on the farm.

The motivation for providing the prisoners with the work experience is simple, Mr Harrison says.

''For every one prisoner who doesn't go on to offend again, there's six to eight victims which don't exist.''

Mr Harrison is aware the scheme is not popular with everyone in the community.

''There's a lot of people of the bread-and-water and breaking-rocks-for-hours-a-day mindset, but that's not the way to prepare these guys to be our neighbours,'' he says.

''There's guys in there who are locked up for 23 hours a day and they are not going to be well-prepared to be positive members of our community.''

The prisoners who work on the farm come from the prison's self-care units, where the prisoners are given as much freedom as is possible behind walls.

The prisoners who worked on the farm were taught a wide variety of skills, from milking and calf-rearing to fencing and forestry.

The prisoners were able to gain unit standards through the work and for many they were the first qualifications they had received, Mr Harrison said.

''A lot of them have nothing; they have left school before NCEA level one.''

Mr Russell said illiteracy was a problem many of the prisoners needed to overcome.

''The guy who doesn't want to do it [sit unit standards], nine times out of 10 he can't read or write properly.''

The results of the training are apparent to Mr Harrison and Mr Russell as both have received calls from employers and former prisoners thanking them for the work they put into preparing the prisoners for the workforce.

A big part of the success was their attitude towards the prisoners.

He could find out about the background of the prisoners who worked on the farm, but did not do so, Mr Russell said.

''When they walk in that door, they are just a person.

The crew now working on the farm had no dairy farm experience - ''but everything is going smoothly''.

The crew was split into two shifts, one group doing the morning milking and the other the afternoon milking.

The morning crew was rewarded for the early start, Mr Russell said.

''They get picked up at half past five to do the morning milking and for that they get a cooked breakfast, which isn't very substantial but they love it.''

Many took the chance to work on the farm to be outside the prison's walls, but many of them also came to love the work, he said.

One prisoner who spoke to Southern Rural Life said being outdoors was the most appealing aspect of working on the farm when he first began.

''It's good doing any kind of work, but this is more enjoyable work for myself and it certainly beats sitting in the wing doing nothing,'' he said.

He now found working with animals was something he enjoyed and hoped to have more opportunities to do so in the future.

''I'm looking forward to getting out, especially when I have got some skills,'' he said.