Productivity and quality pay off for Matarae 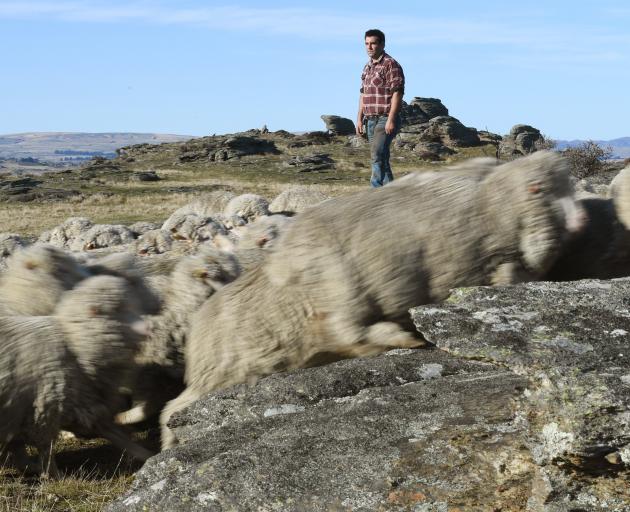 Willie Jones, of Matarae Station, has welcomed the progress made in footrot research. Photo: Stephen Jaquiery
At Matarae Station, Willie and Emily Jones have a strong focus on development and production.

The couple, with young sons Archie and Digby, lease the 5500ha Strath Taieri property from Mr Jones’ parents, Ron and Juliet, but own the stock.

They said they were running both merino and Romney sheep under ‘‘pretty extreme’’ conditions that could range from a metre of snow to very wet, or as dry as the typical Central Otago climate.

The property was running about 5700 merino ewes, 3800 Romney ewes, 3500 merino hoggets and 1800 Romney and halfbred hoggets, plus lambs, mixed-age rams and about 200 breeding cows.

The Romneys tended to be run on the higher-altitude, wetter and more developed country towards the Rock and Pillar Range, while the merinos were more plentiful on the under-developed, north-facing country.

For Mr and Mrs Jones, having the two breeds provided diversification for their operation.

Before returning to Matarae, Mr Jones completed a commerce degree in agriculture at Lincoln University. He then worked at Mesopotamia Station, in Canterbury, and on a dairy farm at Pukerau.

Leasing Matarae had been a good move for the couple, particularly being able to make the decisions themselves, they said.

Since taking over they had made various changes, including a lot of development.They had sown 260ha of crop this year, and between 150ha and 200ha of new grass permanent pasture every year. More than 6km of fencing was done last year and machinery had also been updated.

Lifting productivity was where they could make more money. While they had not increased stock numbers dramatically, performance had lifted, including improved wool weights and lambing percentages, Mr Jones said.

It was hard to put ‘‘kilos and kilos’’ more wool on a sheep, so it made more sense to increase the merino lambing percentage and they were concentrating on getting ‘‘more meat out the gate’’.

Mr and Mrs Jones were Silere alpine origin merino suppliers, the meat brand that originally was established as a joint venture between NZM and Silver Fern Farms. Silver Fern Farms later withdrew from the venture and NZM announced a new partnership last year with Alliance Group.

Mr Jones believed the move to Alliance Group had given Silere ‘‘a new lease of life’’.

When it came to merino wool, Matarae was one of the larger suppliers to the $45 million deal between Italian textile company Reda and NZM announced last year.

Under a five-year contract to source fine wool from NZM, 2500 tonnes were being shipped to Italy to fuel the growth of Reda’s high-end suiting fabrics and active product ranges.

Based in Biella in the north of Italy, Reda is a 152-year-old company exporting to American, European, Asian and Middle Eastern markets.

At the time of the global financial crisis, Reda was producing traditional suiting fabrics but it then diversified into the active outdoors market with the launch of sports brand Rewoolution in 2012.

Its fabrics were used in sportswear, as lining for ski boots and helmets, and in boardshorts, waterproof jackets and footwear.

With three categories of quality, there were only 11 bales in New Zealand that got into the top one — and Matarae produced nine of them.

Reda was very fussy about quality and preparation and there was a strong focus on preparation and presentation at Matarae, where Juliet Jones did all the classing. Matarae supplied wool in the 16.8 to about 18.5 micron range.

Reda’s global procurement director, Fabrizio Botto Poala, was among a Reda team recently at Matarae filming the spectacular landscape, livestock and family for its marketing.

The Reda contract was ‘‘pretty revolutionary’’ for a farming contract, being for five years, and there were also no penalties if a supplier was unable to supply the number of bales they had specified, Mr Jones said.

It was good to meet the users of the end product, gaining an understanding of the process that their wool went through once it left the farm, and the time and effort that went into it, he said.

Reda owned farms in New Zealand and had also bought rams from Matarae for the first time to use on those properties.

Matarae’s crossbred wool was also sold through NZM and Mr Jones was a strong supporter of the company, saying it was trying to stay ahead of what it thought the next challenge in the industry was going to be.

Mr Jones was ‘‘definitely’’ optimistic about the future of the sheep industry, saying ‘‘you’ve got to be optimistic’’.

Farmers were producing a product that was sustainable — it was an animal that lived for about seven years, grew a fleece every year that could be turned into a product and, at the end of the day — like it or not — it could be eaten. It was not like ‘‘sucking oil out of the ground’’, he said.