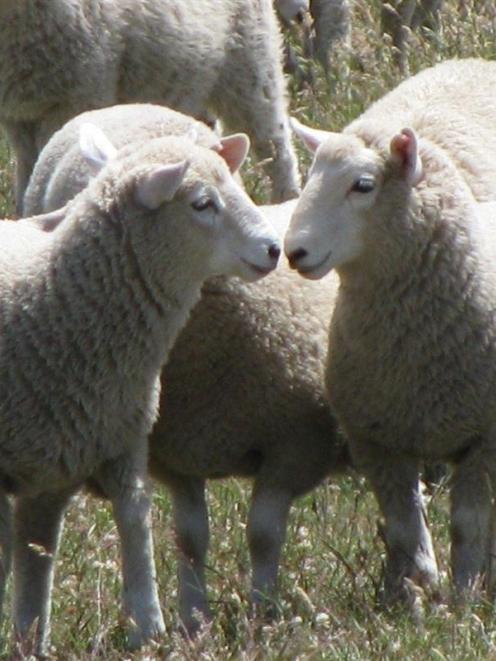 A Perendale progeny test has been extended, with more traits added to the measurements. Photo by Newhaven Perendales.
Warren Ayers believes Perendale New Zealand's progeny test will lead to the betterment of the breed.

Now in its fourth year, the test has been extended, with facial eczema and maternal traits, including body condition scoring and ewe longevity, added to the measurements.

Guided by a Perendale genetics group, the society is working with AgResearch and Ovita, with Beef and Lamb New Zealand investment.

Mr Ayers has taken over as host farm for the South Island portion of the progeny test, while a property at Tutira in Hawkes Bay is also involved.

The ewes were left unshepherded at lambing time - ''That's what I do here, I don't get too serious about lambing at all'' - and the lambs were then tailed in mid-September and tagged in sire groups.

Since then, the gates had been opened, allowing them to mingle, so there was no paddock influence. Weaning was scheduled for the week before Christmas.

Like most sheep breeds, a huge amount of progress had been made in the Perendale breed since his father first started converting to the breed in the early 1970s, he said.

Perendales were first bred by Sir Geoffrey Peren at Massey University in 1956 by crossing a Cheviot over a Romney. The Perendale Sheep Society was formed in 1959.

Mr Ayers, who is also Southland councillor for the society, was excited about the potential of the progeny test and the identification of the best performing genetics.

He believed the breed was in good heart, with an enthusiastic group of breeders throughout the country.

''We are now at that point and are producing accurate information on the genetics of maternal productive characteristics.

''Adding further selection criteria to the base infrastructure now means we can leverage the resource and fully exploit research opportunities,'' Dr Johnson said.

While the data was not going to necessarily produce ''one magic super-sire'', it was identifying genetically superior dual-purpose sires with emphasis on meat production, disease resistance and maternal traits, she said.

The longer-term focus was to ensure the sheep were tailored to farming in hill and high country environments, off the dairy-capable land.

Science and farmers working together on issues that affected long-term productivity and profitability was vital, she said.

Progeny trial chairman Howie Gardner, who farms in South Otago, said the work was being done to provide facts and figures on animal genetics, taking the ''guesswork'' out of breeding decisions.

''Extending the trial into further maternal productive traits and facial eczema is a significant move for us - we think it will help us make a real difference in the sheep industry,'' Mr Gardner said.

Perendales were recognised as an animal with good maternal traits that consistently did well under pressure and were particularly resilient to New Zealand challenges such as snow and drought.

''Anecdotally, farmers have told us they're hardy performers which bounce back very quickly, but a focus on a maternal trait data will ensure that there is verification to back the claims,'' he said.