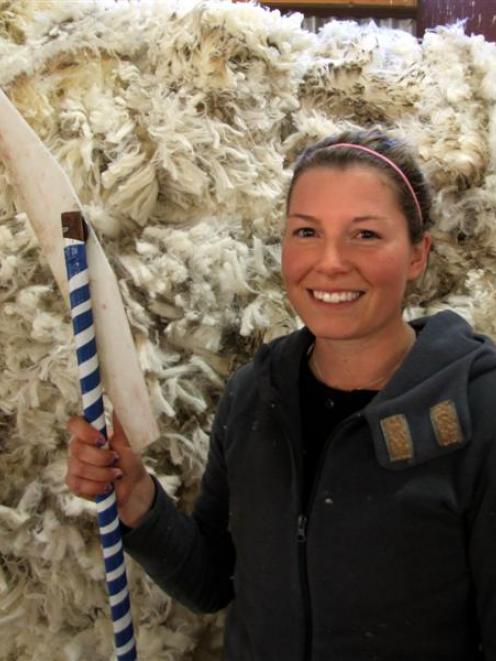 Wool-handling newcomer Nicole Amery takes part in a Tectra fine wool handling course at Kurow last week. Photo by Sally Rae.
When Nicole Amery returns to the bright lights of Auckland, she feels like a "possum in the headlights".

The city no longer has any appeal for the young woman, who was brought up in a non-rural family on Waiheke Island.

A split-second decision to head south to Telford to undertake an equine course, rather than study design, turned out to be life-changing.

It was while Miss Amery (23) was at Telford she "discovered" sheep and beef farming and decided to complete a certificate in agriculture. She wanted to go farming, rather than head back to Auckland.

She worked as a shepherd at Lochindorb in South Otago for about a year, before working at Omarama Station for about 18 months.

Now living in Pleasant Point, Miss Amery joined Allan Scott Shearing two weeks ago, having decided to give up shepherding and obtain another skill.

Her interest in wool was whetted while working as a shepherd and she was enjoying taking part in a Tectra fine wool wool-handling course at Kurow last week.

Her boyfriend was a shearer and travelled to Scotland each year to work, and she hoped to go to the United Kingdom too, and also do some travelling while there.

Miss Amery, who loved her rural lifestyle, said her friends up north had no idea about what farming involved.

While she had much to learn when she moved South, she had no regrets.

"I wouldn't have even known what a shearing shed was if I'd stayed in Auckland drinking lattes."