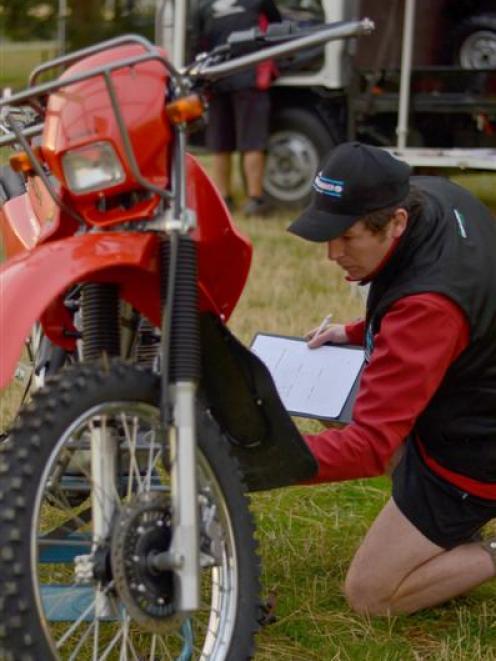 Mr Rabbidge (27) will represent Otago-Southland in the grand final of the ANZ Young Farmer Contest in Auckland later this month.

When he was not busy working on the farm, he could be found in the office, ''head down in the books'', he said. While at times the extra work could feel a little overwhelming, at other times it felt like he had it under control.

While he was trying to do as much as he could to prepare for the contest, ''at the same time you've still got to keep a bit of normality about things'' - which meant he was still running the farm.

Brought up on a sheep and beef farm at Glenham - a property which has been in the family for 122 years and which he is now the fifth generation to farm - Mr Rabbidge was educated at Menzies College.

He graduated with a bachelor of commerce degree in agriculture from Lincoln University and then headed overseas for a year, working on farms, before returning home and joining PGG Wrightson in Alexandra as a technical field representative.

He returned to the home farm just over two years ago and part of the farm was converted to a dairy unit milking 180 cows, which he now manages. Mr Rabbidge said his long-term goal was to return to sheep farming, although he would still like to own a dairy farm.

He has been involved with Young Farmers for four years - he is a former secretary of Upper Manuherikia club and is chairman of the Wyndham club and regional vice-chairman for Otago-Southland. It is his second year competing in the contest.

He was fifth in last year's regional final and was annoyed with himself for making so many ''stupid'' mistakes, but he learnt a lot from the experience, he said.

He enjoyed the knowledge to be gained from entering the contest, and also meeting people. ''It's just pushing yourself that wee bit further, getting outside your comfort zone,'' he said.

He was aware Otago-Southland had a ''pretty strong heritage'' when it came to producing grand final winners, which added a little more pressure.

The region went through a particularly strong period last decade, when the contest was won by Southern young farmers for three consecutive years - Robert Kempthorne in 2003, Simon Hopcroft (2004) and David Holdaway (2005).

Mr Rabbidge married earlier this year, and his wife, Sarah, had been helping him prepare. He had also been to see ''a few local experts'' to get some tips, and every Monday a group of young farmers came round to help him practise with some buzzer questions.

He believed maintaining composure was going to be important at the grand final and he realised he needed to ''slow down a bit''. Despite the distance, Mr Rabbidge expected plenty of support from home at the grand final. About 20 Wyndham Young Farmers Club members will make the trip north.

''I don't know if Auckland will be big enough for them,'' he said.

The Wyndham Young Farmers Club is reasonably strong and between 30 and 35 young farmers turn out to meetings. It had been in recess for some years and Mr Rabbidge was involved in its revival two years ago.

Mr Rabbidge intended to enjoy the contest, which begins on May 16 and will be held at the Kumeu Showgrounds and Sky City. The televised grand final show, where the winner will be announced, will be held on May 18, followed a celebration ball.