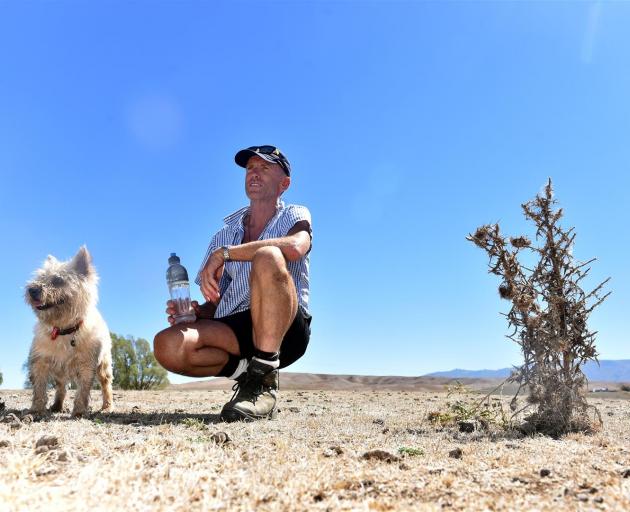 Donny Maclean surveys his dry Omakau farm, Bellfield, with his dog Hamish in the face of the persistently hot weather. Photo: Peter McIntosh
Central Otago farmer Donny Maclean has a saying - ''we're a day closer to rain than we were yesterday''.

It was important to keep remembering that, he said, as the searing heat continued to beat down on his Omakau farm, reaching temperatures up to 36degC on Monday.

''Central Otago will never let you down. It'll take you right to the edge [but] it'll come right in the nick of time,'' he said.

Bellfield has been the Maclean family for 125 years and it was the longest period of continual heat Mr Maclean (56) had experienced during his years of farming.

''We've never been this hot this long,'' he said yesterday.

The district has been included in the medium-scale adverse event classification announced yesterday by Agriculture and Rural Communities Minister Damien O'Connor.

Mr Maclean remained philosophical about the dry spell, saying it was important not to let drought get on top of people.

''Don't let it start affecting you, worrying you at night time. You've got to try and keep ahead of it and have a plan,'' he said.

For Mr Maclean, that involved getting rid of stock as he needed to and it was important to act earlier rather than later.

He could not remember the last time when there was a decent rain and he was continuously monitoring his stock situation.

He had sent store lambs away already and would send more when he needed to. One good thing was that store prices were reasonable, he said.

Half the 1000ha farm was irrigated but that water had been cut to half about New Year and he believed it would be stock water only ''any minute''.

Working in such extreme heat was hard work - ''but you've kind of just got to do it'', Mr Maclean said.

It was important to try to work in the shade during the heat of the day and, on Monday afternoon, he ''pulled the pin early'' about 4pm when it was too hot to concentrate.

A dry relief get-together is being held in Patearoa on Friday, February 9, with the aim for farmers to get off-farm and get some tips on managing the conditions. Keynote speaker is former Black Cap Shayne O'Connor.

Mr Maclean is quite right. Central Otago will not let you down. The rain will come. As a 6 year old in the early 1950s in Ida Valley I remember a terrible drought. When the rain did come I could not understand why the farming family I was living with went and stood in it and were soaked. They all laughed, danced and sang in the pouring rain, they were so pleased to see it.