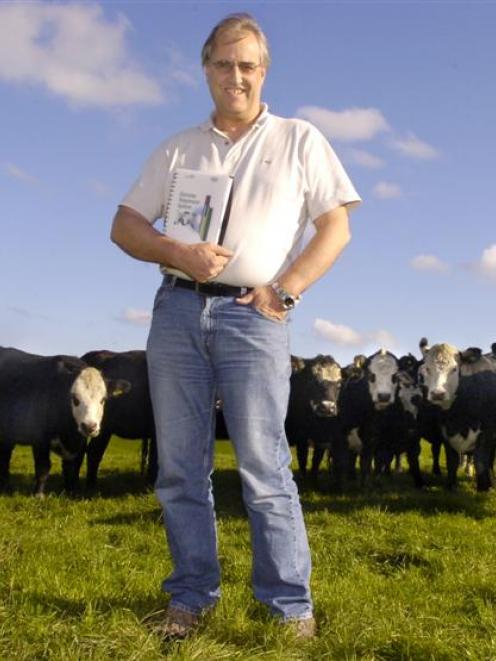 For 10 years, AgResearch Invermay scientist Dr John McEwan has been part of an international team mapping the cow genome. Photo by Jane Dawber.
A $US53 million ($NZ95 million) study of the cattle genome, released today, will lead to greater feed efficiencies and could help deal with the dairy industry's methane problem. Mark Price reports.

That is just one of the more startling conclusions from a 10-year international study of the bovine genome.

But for Dunedin AgResearch scientist Dr John McEwan, who has been closely involved in the project throughout, there are far more immediate, and valuable, implications in the $US53 million study of 500 cattle in 19 countries.

Dr McEwan told the Otago Daily Times yesterday that the work would speed up the introduction of improved traits in cattle, and the New Zealand dairy industry was already making use of the genetic information.

"But longer term, I think it's going to be used for a whole lot of difficult traits that they can't really address very well now."

As an example, Dr McEwan used the efficiency of cows to turn feed into product.

"Up until now, people haven't been able to measure intake on enough animals, so what they have been doing is saying, `Well, how much product is this animal putting out and how heavy is it?' And that's all they use.

"But there are quite big experiments going on now in New Zealand to measure the feed intake and its conversion efficiency through into product."

He said the only way they could apply that to the industry was by using the SNPs, or single nucleotide polymorphisms, which were identified in the study.

SNPs are responsible for most genetic variations.

Part of the study looked at antimicrobials produced in cattle saliva, and Dr McEwan believed that was an area with potential for improving the nutrition of milk and in dealing with methane.

"Downstream from this, it is going to provide us with the tools to start to explore how ruminants control digestion of grass and also potentially factors that influence the production of methane between individuals."

Asked if there might be increased dangers in the ability to more quickly alter the genetic make up of cattle, Dr McEwan said that ability was simply a tool.

"They can be used for good or bad, but historically the problem has been that often we knew we could do things a lot better, but we couldn't really do anything because we didn't have the facilities available."

Cattle had been around for 60 million years.

Dr McEwan believed the genome work would allow for diversity in cattle to be retained while "genetic progress" continued.

A consortium of AgResearch, Dairy Insight and Agritech Investments, invested $US1 million in the project which began in 2003 and New Zealand Friesian, Jersey, Angus and Hereford breeds had been used in the study.

Dr McEwan believed New Zealand had benefited from an early decision to map the genome of cattle rather than pigs.

Two papers on the work are being published in the scientific journal Science today.

Scientists used an "Oxford grid" to compare the chromosomes of cattle and humans and concluded this "reinforced that human genome organisation is more similar to cattle's than rodents' because most cattle chromosomes primarily correspond to part of one human chromosome . . ."