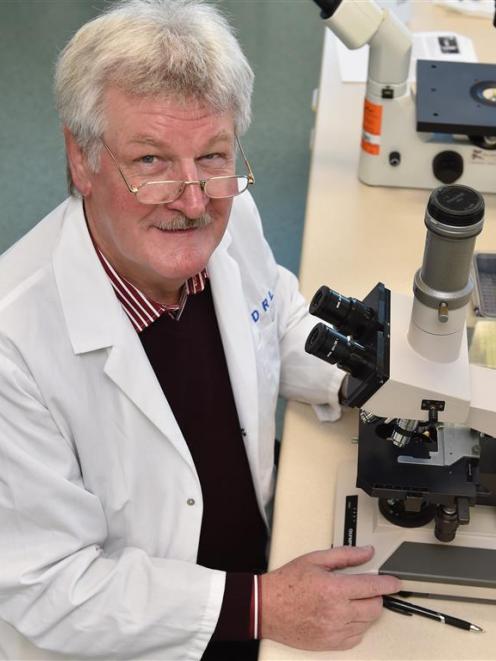 "It's been absolutely amazing. I've had a party every day; it's really been fun,'' he said.

Official retirement might be looming at the end of the month for the popular professor but his association with the university, where he has worked since 1973, is unlikely to end.

He hopes to continue an involvement as an emeritus professor and is also continuing as director of Ag@Otago, a new university-based initiative.

Irish-born Prof Griffin (70) did his primary degree in microbiology then his PhD in reproductive immunology.

He started work at the University of Otago as an immunology lecturer.

At first, he researched pregnancy complications in women but later focused his attention on animals.

For more than 30 years, he has led a university-based research team devoted to solving animal health problems in the deer industry, including developing diagnostic tests for the detection of two major bacterial diseases - bovine tuberculosis and Johne's disease - and a vaccine for the prevention of yersiniosis.

A Fellow of the Royal Society of New Zealand, Prof Griffin said retirement was not a sad occasion.

He was very conscious that it was important, "irrespective of how relevant your work is'', to vacate academic space to bring in younger people with new skills.

With his retirement, that meant finding a new home for his research team, now known as Disease Research Ltd (DRL), if the work was to continue.

That home had been found at Ag Research's Invermay research centre, with access to "excellent'' facilities.

It was "absolutely ideal'' and it also allowed the team to get closer to the deer research group based at Invermay, he said.

DRL would be under the control of Otago Innovation Ltd, a University of Otago company, so there was a link back to the university with the new structure, and he would be involved as a research consultant.

DRL would continue in the Johne's disease area and wanted to extend the scope of its research.

One of its aims was to develop much stronger relationships with the dairy sector and it believed it could make a contribution in basic diagnostics, in both Johne's disease and bovine viral diarrhoea virus (BVD), and also with a new initiative looking at parasitism.

They were three critical diseases affecting livestock in New Zealand and Prof Griffin believed DRL was the last animal health research group in the country.

One area DRL was particularly interested in developing was parasite prevention.

It believed persistent use of anthelmintics had a real downside.

It was expensive and it also happened in the most productive part of an animal's life.

DRL believed there was an opportunity - although it would be a challenge - to change the concept of parasite control.

DRL wanted to look at a new strategy for parasite management, with the ultimate goal of turning natural infection into vaccines.

Most of the initial work would be developed on deer, hopefully transitioning to sheep and cattle later on.

Prof Griffin was quite enamoured with the fact DRL was not just going to be providing diagnostic services.

"If we look at animal health as a theme at present, we're in the middle of a perfect storm on a two-foot surfboard and it's challenging,'' he said.

Long term, he believed a mixed-farm model was where New Zealand needed to be, producing quality branded product and, hopefully, a balance that included sheep, deer, dairy cattle and beef.

Instead of looking at "feeding the world'' with commodity products, the focus should be on providing branded niche products that consumers paid more for, having an interface with nutrition and medicine.

Through that, the environment had to be protected, it had to be sustainable, and the health of animals had to be ensured.

There was a need to move from single-trait selection for just production to multi-trait, including health and welfare.

New Zealand had always been regarded as an innovator in agriculture and it needed to continue to innovate in animal health.

Already, discussions were being held with key agencies in the dairy industry to, hopefully, ensure any contribution that was made was relevant.

He believed there had to be a change in research motivation and attitudes towards funding research.

Farmers needed to be asked what they wanted and needed.

Sometimes, that did not involve new knowledge but marshalling existing knowledge.

There needed to be more collaboration between researchers and producers, tailoring science to meet needs.

"I think, hopefully, now we're coming into a new phase where we can apply really exciting science to providing new solutions,'' he said.

The fact that, periodically, he was able to do "little things'' that could make a difference had been a huge privilege.

He had been surrounded by a great team at the university and there had been wonderful support from the deer industry.

He was excited that deer farmers were at present retaining capital stock.

When it came to the high point in his career, it was his children and his grandchildren, he said.

Aside from his involvement as research consultant with DRL, and with Ag@Otago, he was looking forward to being a "little more time rich''.

"I've got a lathe, I'm going to produce some decorative firewood,'' he quipped.