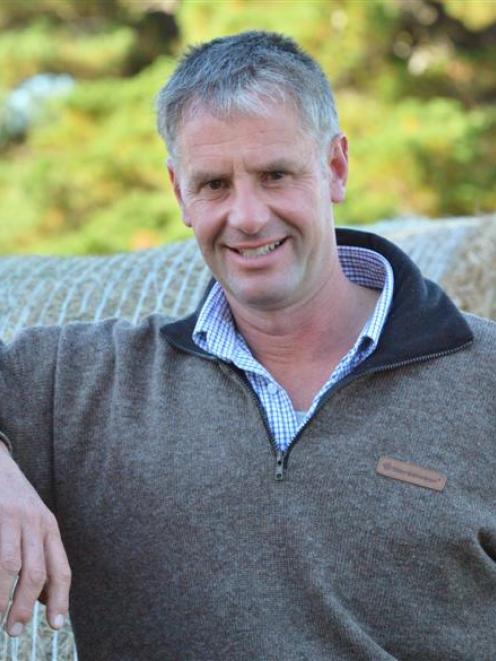 Deep Stream farmer Preston Hope was one of the judges for the final round of the New Zealand ewe hogget competition. Photo by Gerard O'Brien.
After travelling 3800km in nine days, visiting 27 farms throughout New Zealand, Preston Hope is heartened by the state of the sheep industry.

Mr Hope, who farms with his wife, Tori, at Deep Stream, between Middlemarch and Outram, was one of three judges for the final round of the New Zealand ewe hogget competition.

The couple won the competition in 2012 and it was an honour to be asked to officiate, he said.

He and fellow judges Nic Clarke, from Ranfurly, and Stewart Morton, from the North Island, visited properties from as far afield as north of Gisborne down to Southland.

They visited 20 farms in the South Island and seven in the North Island, viewing farming operations in very different environments.

''We are such a small country and yet, sometimes, drive an hour or so and you're in a totally different place altogether,'' Mr Hope said.

He cited the traditional merino country of Omarama and the irrigation development ''around the corner'', which had changed the landscape.

The judges' task was effectively to find the ewe hoggets that were going to be the most profitable over their life-time, while taking into account the likes of the country they were run on and the climate.

They met farmers who were ''really good at what they do'' and he was heartened - and inspired - by their enthusiasm.

''There's some very good-looking flocks out there and very high-producing flocks,'' he said.

One thing Mr Hope noted was how all farmers had different challenges in their respective areas.

Another thing that was clear was that those who were doing well had their partners on board with them, and most were family-run operations.

Being allowed to visit the properties was a privilege.

Contestants were opening their farming operation to scrutiny from outsiders which was a ''big thing'' and the judges endeavoured to give constructive feedback.

While it was very close among the top flocks, the performance of overall winners Simon and Kirstin Engelbrecht was a ''standout'', Mr Hope said.

Despite clocking up hefty mileage and with vast distances between the properties, competition convener Stephen Rabbidge got the trio to every farm within a minute of their expected time - except for the last day.

A trip to reach Muller Station in Marlborough inadvertently turned into quite an adventure - which involved encountering 1000 head of cattle on the move during Molesworth Station's autumn muster, and shifting boulders in a riverbed when the road disappeared- and they met their flight in Blenheim, to return home, with only a few minutes to spare.

Winning the competition themselves had raised their profile and, from an industry point of view, the sheep industry needed to raise its profile, Mr Hope believed.

It was not all about dairy farming; there was a lot of farmland that was not suitable for running dairy cows, and he was enthusiastic about the future.

''I think the sheep industry is in good heart, seeing what we've seen out there,'' he said.

The industry also needed ''young blood'' coming through and, for the first time, a new award was given in the competition for a young achiever, which was won by Kurt and Lisa Portas, from Featherston.