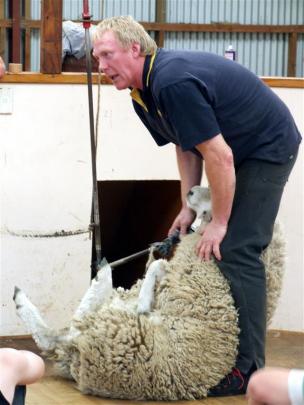 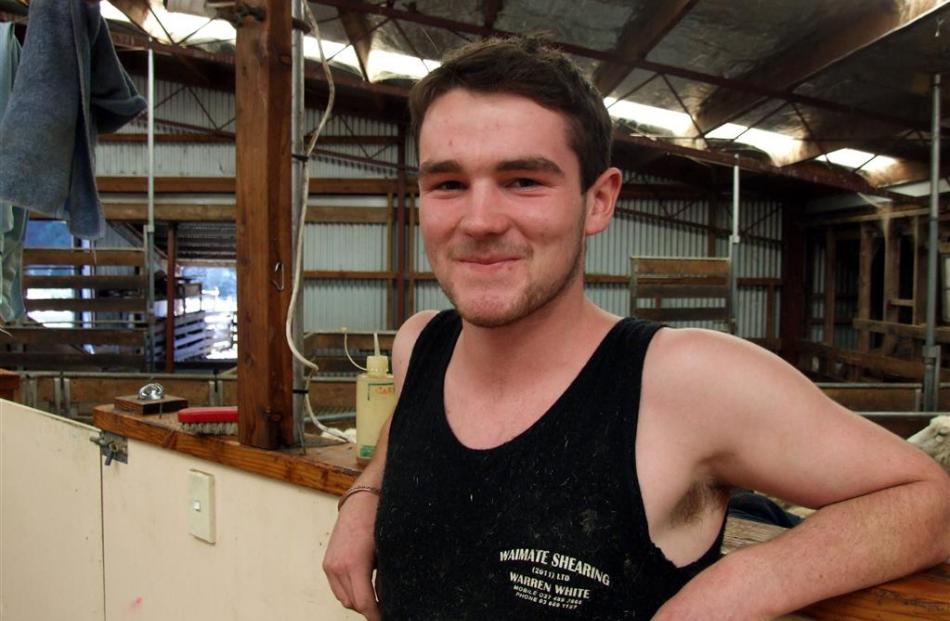 Scottish shearer Ryan MacLean has been honing his skills in New Zealand. 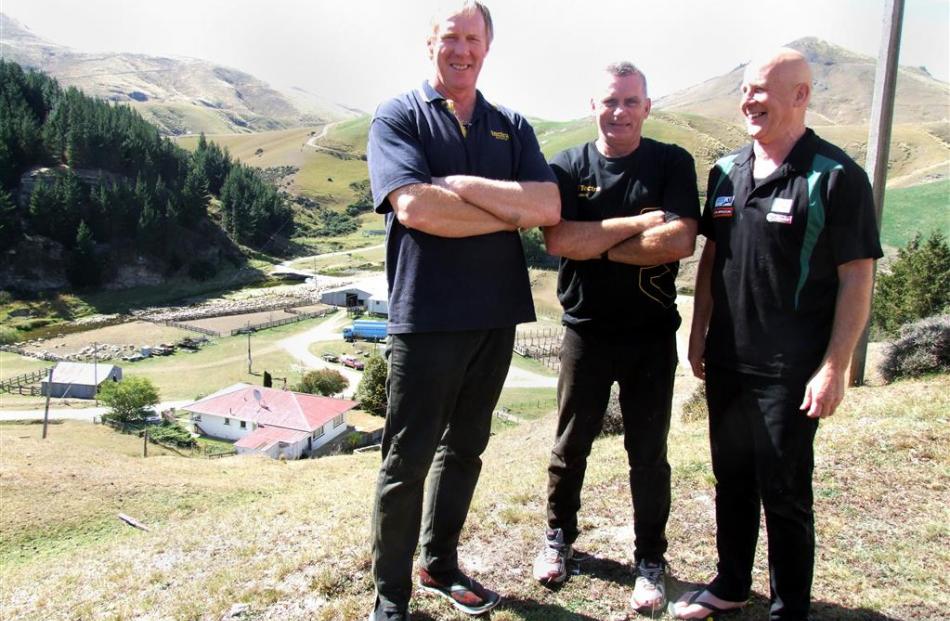 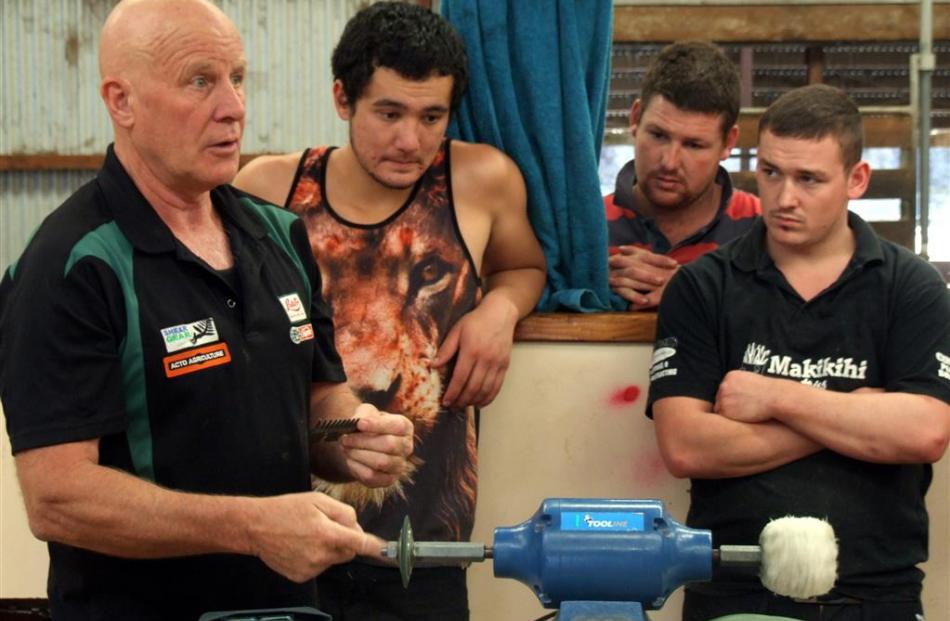 Ryan MacLean came to New Zealand last year "to learn how to shear a sheep and grow grass''.

The young Scotsman arrived in October to work for a Napier-based shearing contractor before heading south in January to work for Warren White, of Waimate Shearing.

From a sheep and beef farm, Mr MacLean (20) has always wanted to be a farmer and he also enjoyed shearing.

The aim of his New Zealand trip was to increase his tally.

He was part of a group of 10 up-and-coming young shearers receiving instruction and advice from Tony Coster, Norm Harraway, Johnny Fraser and New Zealand Shearing Foundation chairman Tom Wilson, who had all been "brilliant'', he said.

The recently established foundation was charged with running the World Shearing and Woolhandling Championships in Invercargill in February next year.

One of its purposes was also to help with training and to preserve the heritage of shearing, Mr Wilson said.

Mr White wanted some training for some of his young shearers and approached the foundation, which facilitated the course. Several young shearers who work for Central Otago-based contractor Dion Morrell also attended.

It was the first course the foundation had held and more were planned, including some merino courses and including woolhandling.

By the final day of the very hands-on course, Mr Wilson was thrilled with the success of it, saying there had been a "huge improvement'' since the first day.

The young men would have the skills they needed to be able to shear a sheep on their own without any help, or be more advanced than when they arrived, he said.

Due to the nature of the work, shearing did not suit everybody but, those who were keen, once they gained the skills, could travel the world.

"The world's your oyster, really,'' he said.

The industry in New Zealand had changed a bit, with more reliance on overseas shearers.

With the drop in sheep numbers, the intensity of the season had increased, with a lot of sheep getting shorn at the same time, he said.

He has been involved with training on and off for about 20 years, both in New Zealand and the United Kingdom.

Being a good shearer did not necessarily translate to being a good trainer.

Trainers needed to understand how people learned, and that there were different ways of learning.

"Sometimes you can talk them through it, other times you have to physically show them.''

Those taking the course were well respected within the industry, Mr Wilson said.

Mr Fraser, who farms in North Otago, reckoned he had probably been shearing for about 30 years and it had taken him from the Falkland Islands to Italy and Norway and throughout the United Kingdom.

He had been involved in training for about five years and enjoyed seeing the participants improve and achieve results during the course.

A few could shear between 150 and 200 sheep a day, while others were struggling to shear one at the beginning.

Shearing was a great career and there were "jobs everywhere''.

More young people were needed in the industry.

"There's too many old buggers like us still going,'' he said with a laugh.

Mr Fraser was involved with judging at shearing competitions, including at the recent Golden Shears in Masterton.

There were some very good junior and intermediate shearers coming through the ranks, he said.

Mr Harraway, from Rakaia, also enjoyed seeing the young shearers "achieve something and do well''.

For some, it was the first time in their life they had realised they were good at something and to see the "light come on in their eyes'' was rewarding.

"Shearing suits good, young Kiwi guys ... the competitive nature of it and the fact it's bloody hard work. I enjoy seeing these young guys come through and achieve stuff."

He agreed one of the big drawcards of the career was the opportunity to travel. He had shorn around the world.

"You find yourself in the middle of Wyoming, where you wouldn't get as a tourist, meeting local farmers.

"There's an opportunity for all these young fellas to do that, travel and make some money while doing it and see the world at a young age.''

Mr White said the best way to get shearers was to train them.

He was grateful for the support of the Eason family for hosting the training course and it was a "perfect set-up'' for it.

While he was based in Waimate, his farmer clients extended as far afield as East Otago, the Hakataramea Valley and Omarama.

Three of his four sons were e now shearing, with two attending the course.

Mr White was also heavily involved with the annual Waimate Shears and fundraising for a new venue for the event.

A new sports stadium was being built in Waimate and the shearing competition was moving on.

It had entered into an arrangement with the Southern Canterbury A&P Association to build on to an existing building at the showgrounds, which could also be used for other functions.

Fundraising was under way and it needed to be completed by October.

For Mr MacLean, the opportunity to work in New Zealand had been "awesome''.

He had been aiming for 200, but they ran out of sheep, so he hoped to achieve 200 when he returned home.

Now heading to Australia for two weeks' holiday, he would get home in time for lambing.

He hoped to be back in New Zealand in August, heading to Waimate in January next year to work for Mr White again.

He described both Mr White and the contractor he worked for in Napier as "the two best bosses I've probably every had''.

"I was really, really nervous leaving home; it was a big thing to come over here. I love home. I've been treated that well I didn't have time to get homesick. I've really found my feet with the jobs I've had,'' he said.

And there was nothing quite like seeing the countryside from the back of a shearing van.

Although, in the early morning, his favourite activity was sleeping on the way to a job, he said, laughing.