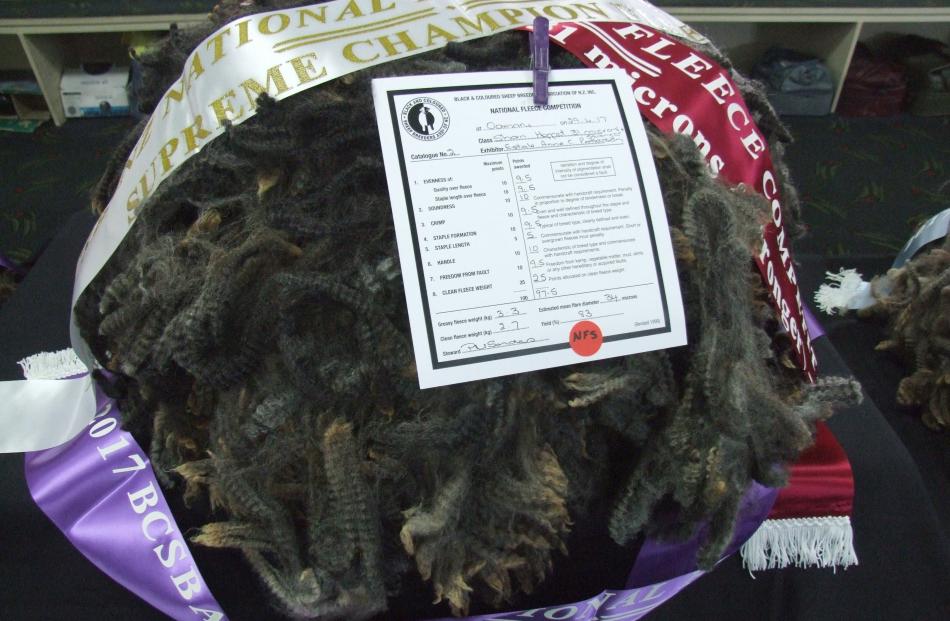 The supreme champion fleece at the Black and Coloured Sheep Breeders Association of New Zealand’s conference, which is from the estate of the late Anne Patterson. Photos: Sally Rae. 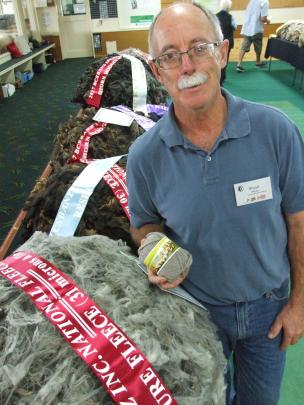 Waimate sheep breeder Stuart Albrey with one of his Polwarth fleeces and a ball of natural-coloured yarn from his Polwarth sheep. 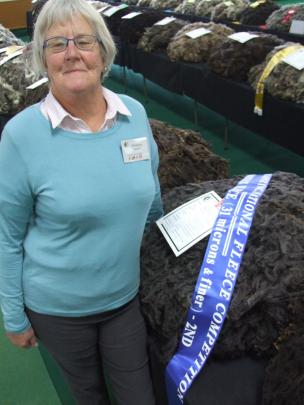 Stuart Albrey is a man of many talents.

He's a sheep-breeding, gymnastics-coaching school teacher who is also handy with a pair of knitting needles and a spinning wheel.

''I'd do brain surgery if they'd let me. I'd put my hand to anything,'' he quipped during the Black and Coloured Sheep Breeders Association of New Zealand's conference in Oamaru last week.

Mr Albrey and his wife Sue have 450 Polwarth, merino, Romney and Corriedale sheep on their property at Arno, near Waimate, of which about one-quarter are white.

Most of the white ones had a coloured gene, he said. He occasionally bought a white stud ram to use over his flock as there was such a small genetic pool in black and coloured sheep.

Without the ''huge choice'' white sheep breeders had, the only way to assist lifting the quality of the black and coloured product was to use those genetics - ''but you have to be patient'', he said.

Mr and Mrs Albrey shifted from Wellington to Waimate in 1986, originally buying a house and about 1ha of land.

While not coming from a farming background, he used to spend school holidays on a farm with friends.

He had been heavily involved in sport, but that was curtailed by a knee injury, meaning he could not be competitive anymore.

During a visit to the local A&P show in Waimate, he looked at the sheep pens, saw the ribbons and thought ''I could do that''.

A fellow teacher at school was involved with handcrafts and she was a good friend of well-known black and coloured sheep breeders, the late Bruce and Ellen Anderson.

She introduced the two couples - ''and the rest is history'', Mr Albrey said.

He got some more sheep and leased some more land, but used to spend all his time driving from block to block.

So the couple bought a larger property, which allowed them to have more sheep. This helped with the genetics, and the venture had grown from there.

His grandmother, who used to live with his family for about six months of the year, was a voracious knitter who could whip up a three-ply black ball gown using circular needles, Mr Albrey said.

He could knit by the time he was 6 and used to win a few bets at school by sneaking his knitting into his locker and showing his schoolmates he could knit. He still enjoyed knitting and spinning when he had time.

Being proficient at both those crafts gave him an advantage when a customer wanted to buy wool for a particular purpose. He could advise on what was required, knowing the end product.

He acquired three large flat-bed knitting machines from the Waimate Knitwear factory when it closed.

The machines, weighing a tonne and a-half each, had to be lifted into place with a Hiab truck crane, and he built the room around them in his implement shed.

Once operational, he expected the machines would use ''quite a bit'' of the wool their sheep produced. Most of their wool was destined for overseas customers.

He reckoned baby cot blankets could be a good product to produce, given it was such a natural item.

They were targeting a niche market - those with discretionary incomes and discerning about what they were buying.

Teaching at Waimate High School and also being heavily involved in gymnastics at a national level meant finding time was the issue and weekends were his ''farm time''.

''It's a passion. It gets under your skin. One day it's going to make some money,'' he said.

He and his wife joined the Black and Coloured Sheep Breeders Association of New Zealand about 25 years ago.

''We were the youngies then and we still are,'' he joked.

They enjoyed the camaraderie among members. The association was founded in 1976 and now had about 120 members from throughout New Zealand.

President Phillippa Sanders, of Geraldine, said she was also introduced to black and coloured sheep through an association with Bruce Anderson.

He and her father were good friends and deciding she needed to diversify her interests from horses, she went to the Canterbury A&P Show and ended up helping Mr Anderson in the sheep pens, she said.

From there, her interest grew and she now had a flock of about 20 sheep. Like Mr Albrey, she also enjoyed the comradeship among members, along with showing her sheep and producing good fleeces. She usually exhibited at between 10 and 12 shows in a season.

''I just enjoy bringing my sheep out and letting people see them and see the product,'' she said.

The association's conference attracted 51 registrations and included a bus trip around the district, which included a visit to Mr and Mrs Albrey's property.

There was also a fleece competition, with about 70 entries, and it was won by the estate of the late Anne Patterson, from Cave, with a hogget fleece.