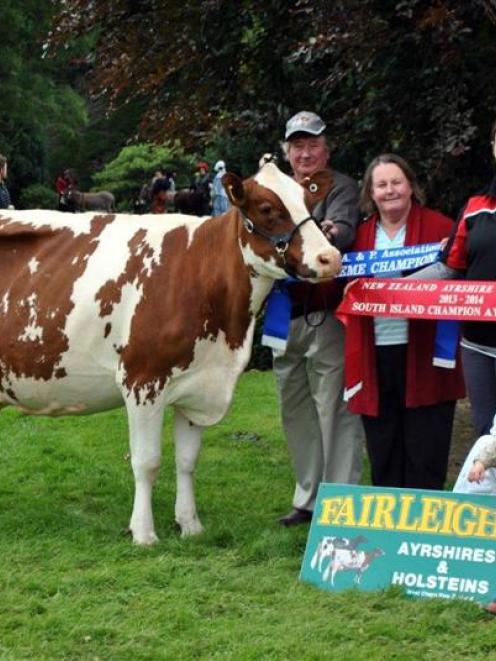 Instead, the West Otago dairy farmer's hobby is showing the family's Ayrshire cattle, a breed he has been involved with all his life.

Mr Eade (35) was presented with an achiever award at Ayrshire New Zealand's annual conference in Invercargill, along with Kelly Allison, who farms on the Taieri.

The recognition came as a surprise and he described it as ''very humbling''. It was particularly nice to have it presented in his home territory, he said.

His parents, Ken and Nancy Eade, had been involved with Ayrshire cattle since ''day dot'', farming at Tisbury, between Invercargill and Bluff, before moving to Kelso in 1995.

Tisbury was hard country and Ayrshires seemed to be a hardier type of cow, while the fact Mrs Eade was Scottish ''probably had a lot to do with it''.

According to Ayrshire New Zealand's website, the breed originated in Scotland before 1800 when different strains of native cattle were crossed with other breeds.

Most were black, but the browns and mottled colours started to appear by 1775. The improvement of the native stock began about 1750 with the crossing of such cattle as Teeswater. Early breeders carefully crossed and selected various strains of cattle to develop what was now know as the Ayrshire.

The first Ayrshire arrived in New Zealand in 1848, a bull called Rob Roy, who was loaded on to the ship Philip Laing in Glasgow.

The vessel arrived in Otago in April 1848 carrying the main body of the first Scottish settlers to New Zealand and founding the settlement of Dunedin. The first cow arrived the following year. Ayrshire New Zealand was founded in 1909 in Palmerston North.

Bruce Eade still has the trophy that he won at the Wyndham A&P Show when he was 4, in 1984, with a calf.

Daughter Sophie, who turns 3 this winter, took a Jersey calf, as it was smaller, to a show last year for the first time and received several second places.

While showing dairy cattle was more prolific in the past than it was now, they still viewed it as their ''shop window''.

Mr Eade enjoyed getting their cattle ''dolled up'' and putting them on show, travelling as far afield as the Canterbury A&P Show in Christchurch, and also shows in Otago and Southland.

It was an opportunity to see how their animals compared with others and to see where they were at, he said.

Mr Eade is a senior Ayrshire judge and also a committee member of the Gore A&P Association.

When the Eade family moved to Kelso, they needed to increase cow numbers and, to do that, they bought some Holstein Friesians.

Their herd was now about a 50% mix of both and they all ran together in a commercial scenario, with ''no special treatment''.

Mr Allison is a strong supporter of A&P shows and is on the executive of the Royal Agricultural Society of New Zealand.

He is a senior Ayrshire judge and also a Jersey judge and has organised the Otago Taieri on farm dairy heifer competition for 15 years.