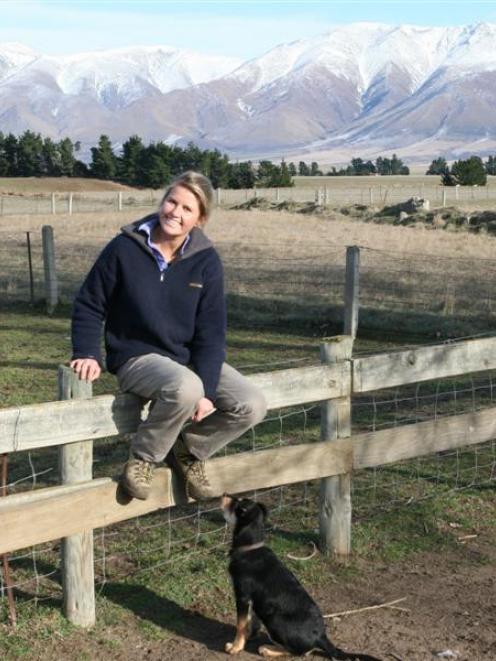 Miss Murray (29) is living on a sheep and cattle farm with her fiance Tom Hayman while continuing to perform at gigs throughout the country at weekends.

She is also hoping to help inspire and motivate other young rural women by sharing ideas through Young Rural Ladies, a social media site she has set up with Sarah Connell, another newcomer to rural life, and which has quickly gained a following.

Originally from Lake Tekapo, where her family has been involved in tourism for most of her life, Miss Murray's dream growing up was always to be a famous singer.

She travelled overseas, did some nannying in the United States and worked on a dude ranch before moving to Auckland for two years, where she worked in cafes during the day and sang at night.

She also met fashion designer Trelise Cooper, who has been lending her clothes for her performances for the past four years.

After spending time in London and South Africa, she moved back home to Tekapo two years ago. When romance blossomed with Mr Hayman, whom she had known since school days in Christchurch, she started spending more time in the Hakataramea Valley, near Kurow.

Now permanently ensconced in the valley and preparing for her wedding in March, Miss Murray has been enjoying renovating her new home.

She was also getting creative, whether it was spray painting animal skulls she found on the farm to ''make them look pretty'', or upcycling pieces of wood found in the yard to make coatracks. Her latest project involved making a chandelier out of antlers.

She was enjoying the network of rural women in the local area who had dubbed themselves ''the Waitaki Wags''.

''It's just such a cool group of people and they've made me feel very welcome,'' she said.

Farming was relatively new to Miss Murray but she was enjoying helping out on the land and learning the ropes.

Most weekends, she and her Wanaka based band No Reason were performing, whether in Auckland or Winton, Queenstown or Dunedin.

Recently, she performed in front of 900 people at the 10 year anniversary of CatWalk Trust, an organisation focused on fundraising to support research into spinal cord injuries.

The event, held at SkyCity in Auckland, was attended by the Queen's granddaughter Zara Phillips, who is CatWalk's patron and a friend of Miss Murray.

Despite being a little nervous, she was inspired by CatWalk founder Catriona Williams, who was left a tetraplegic after a fall from a horse in 2002.

Miss Murray said she loved performing in front of large audiences, particularly at the likes of The Branding music festival in Central Otago.