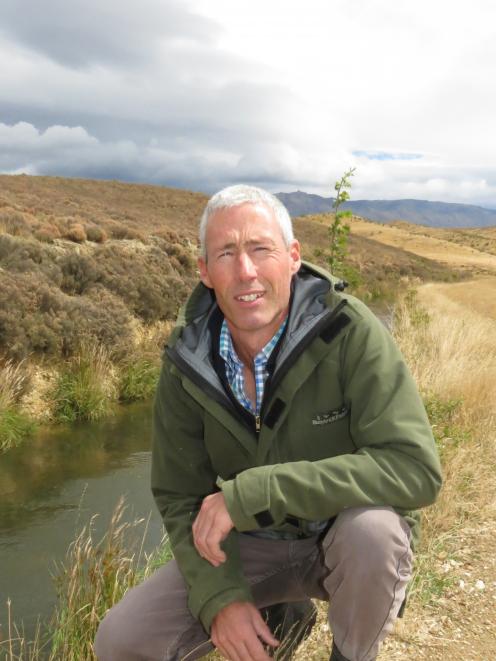 Agricultural applications will be developed from space-generated data, which will be harvested and brokered at the planned Centre for Space Science Technology in Alexandra. Implementation group member and farmer Gary Kelliher, of Alexandra, is keen to talk to anyone who has suggestions on how the data could be used or ideas about product development. Phone Mr Kelliher on 027-284-5890. Photo: Yvonne O'Hara.
Space-generated data will create more efficient irrigation and maximise crop yields, potentially saving farmers thousands of dollars, Alexandra farmer Gary Kelliher says.

Mr Kelliher is an implementation group member of the planned Centre for Space Science Technology (CSST) in Alexandra. He said having continual and improved access to space-generated data would allow for more efficient irrigation and greater crop yield,  and that better imagery and  daily information about plant density and health, biomass and fire risks would be some of the key possibilities for farmers once the centre  was established.

The Alexandra scientists’ work programmes would include developing technology to provide accurate and wide-ranging soil moisture measurements on irrigated and hill country properties and to measure plant health, density and volume for orchardists and forestry companies. Being able to provide accurate soil moisture measurements would allow farmers to make more efficient use of irrigation and fertiliser applications on different soil types.

"As an example, some farmers might have a $100,000 annual bill for irrigation.

"It is a double whammy.

"[The technology] will allow farmers to time pivot operations for optimal effect.

"If they are able to control irrigation more efficiently and accurately they can grow better crops more consistently across varying soil types," he said.

"Their crops [under their present systems] might be reaching 60% or 70% of their true potential, but with the right amount of water, they will be better able to maximise that potential.

"By making better use of water, Central Otago could well be more productive per hectare than Southland in 10 years’ time."

Their application was successful and the group was granted about $15million (as well as co-funding) to establish the institute in Alexandra.

Mr Kelliher, an implementation group member,  said the contract with the MBIE would be signed shortly, after which the group intended to establish the institute’s overseeing trust.

The group will be asking for expressions of interest from people who wish to be trust and board members (and chief executive) and hopes to open the centre in six months.

The institute will also employ about 30 to 40 scientists,  information technology experts and support staff, all of whom will be based in Alexandra.

Although the institute will have bases in Dunedin, New Plymouth and Lincoln, its head office will be in Alexandra, where scientists will harvest and broker data from existing satellites and eventually the centre’s own CubeSats (extremely small satellites), to develop agricultural, horticultural and forestry-focused products for improved irrigation, soil, fertiliser, plant-monitoring and farm-imagery applications.

The centre will also transfer data to commercial and regional council entities which wish to develop their own products for on-sale to farmers and other consumers.

The centre will earn its income from royalties and commissions and  hopes to be self-sustaining within three years.