Sri Lanka a different side of dairy farming

Kelso dairy farmer Marloes Levelink has returned from a three-week stint in Sri Lanka. Photos: supplied.
Dairying in Sri Lanka is a much different scene to the lush pastures of West Otago.

Kelso dairy farmer Marloes Levelink returned this month from a three-week stint in Sri Lanka, as part of a new farmer volunteer scheme to work with  dairy farmers there.

From more than 100 applications from Fonterra shareholders, she was one of four selected to spend time at Fonterra’s demonstration and training farm in Pannala, near Colombo. The experience also involved working with local farmers and Fonterra supplier relationship officers and running workshops. 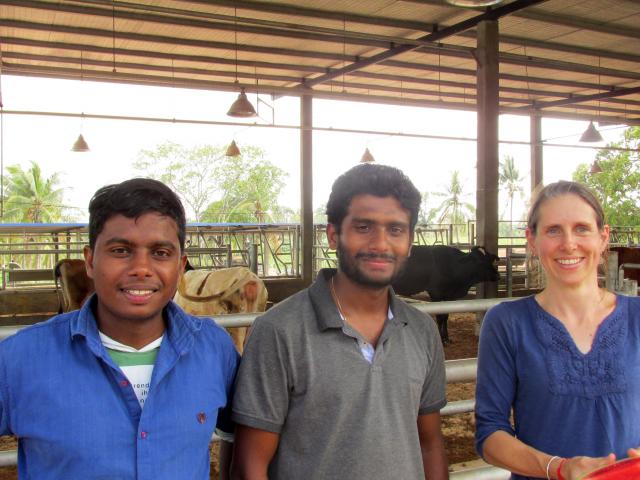 Marloes Levelink with farm manager Dr Iroshana Kulathunga and assistant farm manager Harshan Ramanayake at Fonterra’s demonstration farm in Sri Lanka.
The farm and scheme were part of Fonterra’s Dairy Development programme. It supported the growth of sustainable dairy industries in key markets where Fonterra operated, including Sri Lanka, Indonesia and China, by sharing expertise and working together with local farmers, governments and industry players.

The farm was aimed at helping Fonterra and its partners to increase local milk collection, improve milk quality and lift farmer incomes.

Ms Levelink and her partner Jonathan Verkerk milk about 400 cows and she also runs her own farm advisory and training business.

She has previously travelled to Indonesia and Africa where she worked and volunteered in similar lines of work.

She saw the Sri Lankan trip as ‘‘another cool opportunity’’ and she found it a very interesting experience, with a  full programme.

That milk was produced by small-scale local farmers, who might have two or three cows. A larger cow owner might have 15.

An average supplier was providing 10 litres of day. To put that in perspective, the daily pick-up from all farms in Sri Lanka was about 20,000 litres, while Ms Levelink’s farm was supplying about 8000 litres.

People milked their cows by hand, with a bucket, as they could not afford technology if they only had two or three cows.

The biggest challenge was the climate. While major flooding last year meant her trip was postponed, rain was now desperately needed.

From the cow’s perspective, it was feed quantity and mostly quality. In the tropical climate, grass was never going to be as lush as West Otago, she said.

Mostly, the cows were a tropical breed crossed with a Jersey. They were very small, probably weighing about 300kg-350kg.

While Ms Levelink believed there was potential to grow the Sri Lankan industry, it was "all in a very different perspective".

Eighty-five percent of fresh milk in Sri Lanka was produced by small-scale suppliers. A lot of people would have a cow or cows to milk for family consumption and, what was left, went to Fonterra. Then there was a group of farmers that had dairy as their primary source of income and that was the group that Fonterra’s supplier relationship officers were working more closely with.

The Sri Lankan Government would love to be self-sufficient but, at this stage, the average consumer was only consuming about a quarter of the daily recommended intake of dairy products.

"It’s got potential but in its own way," she said.

She found the Sri Lankan people to be very enthusiastic and warm. The crew within Fonterra were very passionate about their work, as were the farmers, and they were all  interested in exchanging information.

She would love to go back in the future as she believed there would be a lot of differences.