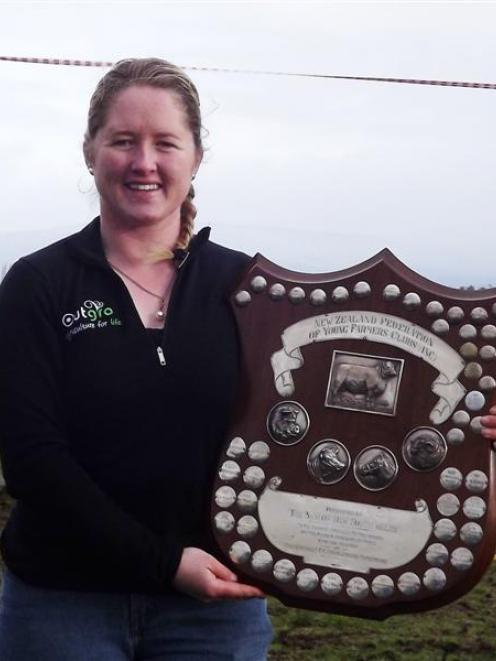 The national competition finals were held during the organisation's recent annual conference in Masterton, which coincided with the Young Farmer Contest grand final.

Miss Ross won the sheep section and then went on to claim the overall title and she was "stoked" to win.

Her next plan was to compete in a national stock-judging competition at the Royal Show, with the goal of competing in Australia, she said.

It had been an "awesome" week in Masterton and she also received a last-minute call-up for a South Island debating team.

She enjoyed being part of a contingent from the south which headed north to support Otago-Southland Young Farmer Contest grand finalist Hayden Peter, and she also knew the other two South Island grand finalists.

Miss Ross entered the Young Farmer Contest this year and planned to have "another crack" next year.

"I'd like to do one for the girls but there's a lot of other people out there that want to do the same thing," she said.

In her job, she was learning from farmers every day and building up a network of people who could help her.

The Otago-Southland team of Pete Gardyne and Brad McNamara, both from the Waitane club, were clear winners in the national Young Farmers fencing competition final.

Seven teams, which had each won their respective regional finals, competed in wet and muddy conditions at Taratahi Agricultural Training Centre.

Mr Gardyne was no stranger to fencing under pressure, having done his fair share as a grand finalist in last year's Young Farmer Contest, while Mr McNamara also had a lot of experience, having started helping out with fencing on the family farm when he was 7.