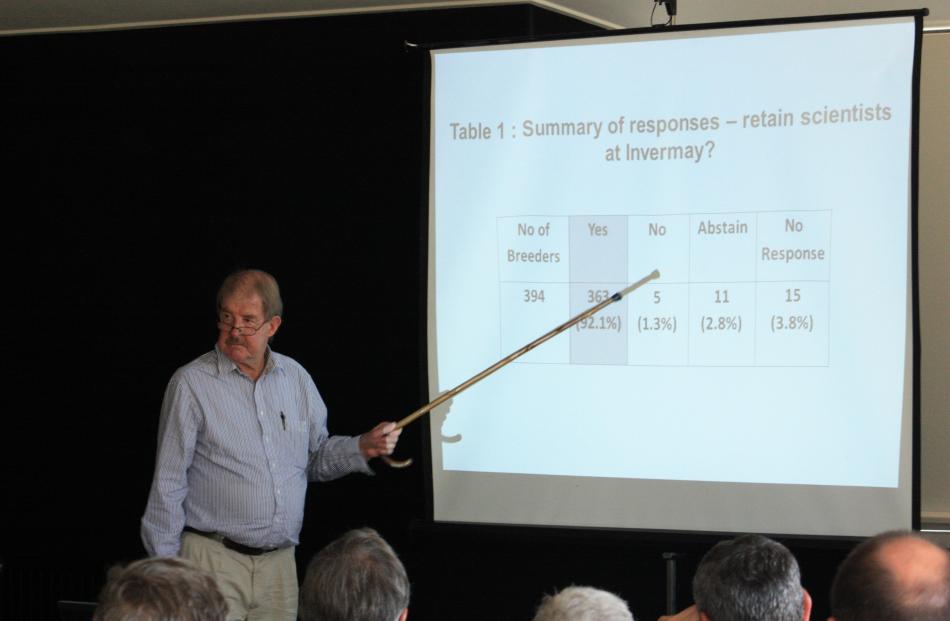 Sheep and deer breeders across the Otago region will be hit hard by the closing of the AgResearch Invermay facility, opponents of the plan say.

At a heated meeting organised by the Southern Texel Breeders Association in Gore last week, Invermay supporters challenged AgResearch NZ and its decision to move genetics and genomics programmes and some staffing from the Mosgiel site to Lincoln in Canterbury.

Sheep farmers were more reliant than ever on Invermay science as they were forced higher into the hills by land-use change, a Central Otago farmer said.

Others at the meeting voiced concerns that moving Invermay capabilities would harm the sheep and deer industries in Otago and Southland, and that the move might break down relationships between farmers and AgResearch.

Meeting organiser Hamish Bielski questioned the viability of the move and said having to travel to Lincoln to use AgResearch facilities there would mean higher costs for farmers.

When asked by a member of the public why the $11 million Christie Building at Invermay, constructed about five years ago, was closing, Dr Richardson said that [the building closing] was a myth and it would remain open and staffed.

''We can't have a grown-up conversation if there is that level of [mis]understanding.''

Dr Richardson said the relocation of staff from Invermay was a part of the Future Footprint (FFP) business case, with an aim to increase the export percentage of GDP from 30% to 40% by 2025.

A former Invermay scientist, George Davis, challenged him, saying Invermay facilities, including the Christie Building, were up to date and moving staff was a waste of money. He presented a case for expanding rather than reducing Invermay.

Dr Richardson said AgResearch had to balance national with regional science and there was no political slant involved in the move to Lincoln.

''There are no other hidden agendas other than doing the best science we can possibly do.''

Sheep farmer Peter Black said the move was pointless, as the system in place was functioning properly already.

''We have been offered pie in the sky when we have bread and butter on our back door.''

There was no point in trying to fix something that was not broken.

Towards the end of the meeting, Invermay stakeholders asked AgResearch representatives to take on board what was being said, and asked if they would reconsider the plans to move staffing and science programmes to Lincoln.

''We are always listening and we always have an open mind. We will take in what has been said today, but we will not wind the clock back.''