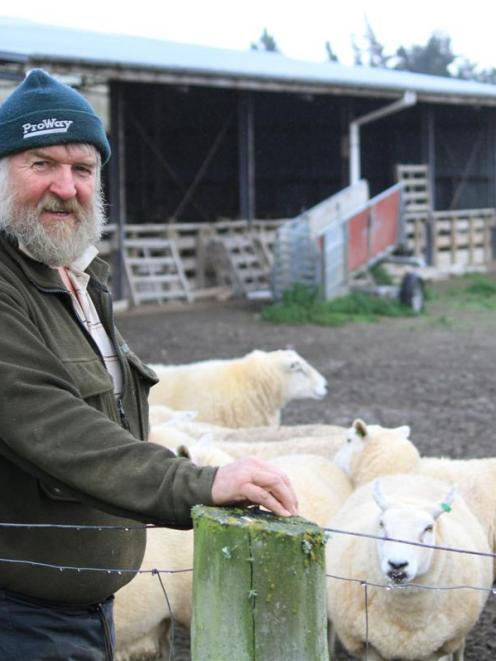 Texel breed committee chairman Geoff Howie is looking forward to a celebration this week marking 25 years since the breed was released in New Zealand. Photo by Hamish MacLean.
Geoff Howie was one of the original breeders who invested in Texel sheep when they were released from quarantine in 1990.

The South Otago farmer always liked to look at something new that had a promising future and he had also been ''right into meat and something outside the square''.

''Texels took my eye right from the start,'' he said. The Texel originated on the island of Texel to the north of Holland in the North Sea. The sheep imported into New Zealand were sourced from Denmark and Finland.

As soon as they were released, Mr Howie bought a ram from Hopuhopu, and later bought a ewe and lamb from a sale in Invercargill.

The Iona Lea flock progressed from that and he maintained stud ewe numbers about 100.

A few years ago, he held a sale of surplus ewes and retained the best.

He has been going to the local Tokomairiro A&P Show in Milton for 50 consecutive years.

One of the highlights was winning supreme champion sheep at the show with a purebred Texel ram lamb, which was 3 months old, in 2008.

Each year, the Howies sold about 40 purebred Texel rams and, on average, about two or three stud rams. He believed the Texel was only ''coming of age now''.

''I believe people are getting on to this yield grading and starting to realise they are getting something for nothing by killing lambs 2-3kg lighter at weaning and getting the same carcass weight, which means a lot when you're taking them off the mother.''

Mr Howie started the Otago Texel Club and was the first chairman. He has since served other stints as chairman.

All Texel breeders in Otago were club members and it usually met only about twice a year, given the distance between studs was vast.

He had also enjoyed his involvement with the Texel breed committee - including chairing it in the year of the 25th anniversary - and believed in ''putting something back into what you've got out of and doing my bit while I'm able''.

Mr Howie believed the contribution of the Texel to the sheep industry had been immense, saying the percentage of the breed in the national ewe flock was ''huge''.

He was pleased to see the number of Texel and Texel crosses picking up awards and accolades in lamb awards such as the Glammies and the Mint Lamb competition.

A celebration of 25 years of Texels in New Zealand is being held in conjunction with Texel New Zealand's breed conference in Methven this week.