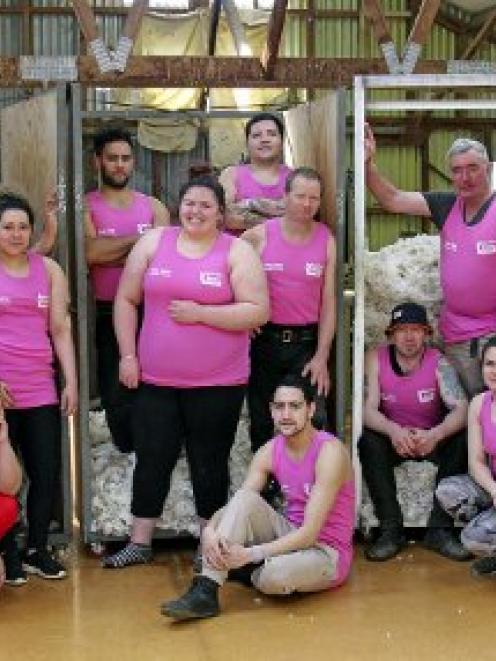 Not only did the Invercargill man lose his daughter, Paula Dempster, to cancer in December last year, but his wife, Lorraine, died in February this year, also succumbing to the disease.

What has helped keep him occupied has been a fundraising initiative, selling pink singlets to those in the wool harvesting industry, with $2 from each sale going to boost hospice coffers.

After the deaths of his daughter and his wife, the retired man's two sons encouraged him to get back to work. He had previously spent about 25 years in the clothing industry.

He told her he was thinking about commencing a pink singlet fundraiser which Mrs Cox encouraged him to do, so he ordered 1500 singlets.

Ms Kumeroa (45) died in April after a three-year fight with cancer. Well-known around the woolsheds of Otago and in competition scenes of Balclutha, Alexandra and Gore, she had won several world individual wool-handling championships, six Golden Shears titles and six New Zealand open championships.

Her last Golden Shears open final occurred during her cancer treatments and as she fought to raise women's awareness of cancer.

When woolclasser Barbara Newton, a great friend of Ms Kumeroa, saw Central Otago shearing contractors Peter and Elsie Lyon had bought pink singlets from Mr Ballatine, she acquired some for the hogget shearing gang at Stonehenge, at Patearoa.

Ms Kumeroa was a regular at the Hore family's woolshed and the gang embraced wearing their singlets, as they all knew her.

Various other initiatives have been held in the industry to promote awareness, particularly of the effect on those close to the person with cancer. It seemed to have snowballed, Mrs Newton said.

A rural telethon-type event, shearing for charity, is being held in Hawkes Bay in January, raising money for the Cancer Society.

Mr Ballantine said singlet sales had mostly been in Otago, although he had also sold some in the North Island. He had spoken to shearing contractors throughout the country and he hoped the initiative ''takes off''.

While the hospice contribution was ''a drop in the ocean'', ''every dollar's a dollar'', he said.

Mr Ballantine, who nursed his wife of just on 52 years until she went into hospice care, visits the cemetery at least once a week. The graves are just five apart.

Despite enduring a hard time, he was determined to keep himself motivated and busy, whether that was helping a friend tail lambs, or cutting firewood - ''you've just about got to make an appointment to catch up with me'' he quipped - and he was very fortunate to have good mates, he said.