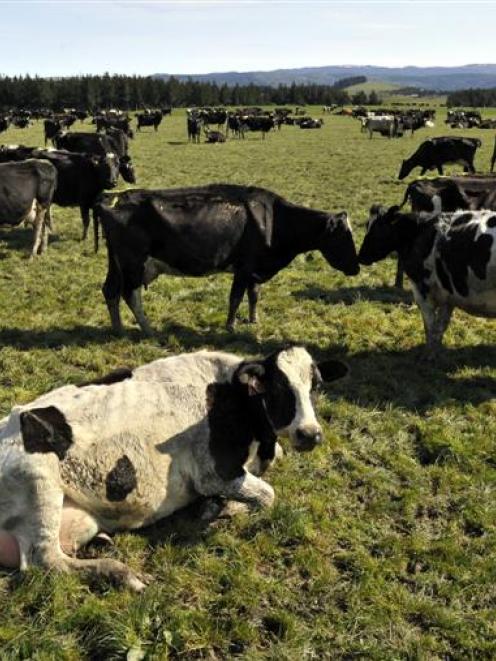 Photo by Gerard O'Brien.
An ugly "reality check" looms for the dairy sector next season if Fonterra payouts are undermined by increasing global production, raising the prospect of indebted dairy farmers struggling to break even.

While hundreds of millions of dairying dollars flow annually into the economy and have provided a recessionary buffer, agricultural debt has ballooned to $47.6 billion, of which 64%, or $30.4 billion, is owed by the dairy sector.

Already, falling dairy commodity prices are raising concerns, compounded by the New Zealand dollar's strength, but looming is the certainty of competition from rising global supply.

National Bank chief economist Cameron Bagrie, in Dunedin and Timaru yesterday for broker briefings, said while Fonterra's current forecast payout of $6.30 plus dividends this year was not threatened, "the 2012-13 season would deliver a reality check".

The real challenges would begin then, he warned.

He estimated that as long as the dairy sector stabilised and rebounded during 2012-13, a payout of $5.75 a kilogram of milk solids was feasible next season.

However, with global production from competitors rising 8%, he believed the payout could be forced down to $5.50. While debt-free dairy farmers could sustain the lower price, there were larger numbers of debt-laden farmers facing lean times.

BNZ economist Doug Steel was more conservative than Mr Bagrie but moved his estimate down for 2012-13. He forecast a $5.80 payout but noted there was a "sense" of more negative risk than upsides at present.

While Mr Steel said production this season was likely to be 10% up on last season's, contributing about $500 million, he noted a 10% drop in international dairy prices at the last global online auction.

He said international supply and demand meant exports of all primary-sector products were down 12%, while during the past three months, average dairy prices were down 17%.

A "significant" part of an expected $3 billion decline in overall goods exports next year was attributed to food exports and "it could well be more".

"At the farm level, this equates to such things as a lower dairy payout and lower lamb and wool prices," Mr Steel said in his monthly "rural wrap" yesterday.

At a $5.50 payout, the indebted dairy farmers "could have their backs forced to the wall"once production costs, capital expenditure, interest payments and depreciation were accounted for.

There had been price declines in five of the past six GlobalDairyTrade trading events, with the GDT-trade weighted index down 5.7% since December 13 last year, when the forecast of $6.50 was announced.

Mr Bagrie agreed with other analysts that the estimated "break-even" payout was about $5-$5.10, but whether that applied to all dairy farmers was dependent on their respective costs structures and debt levels.

In mid-March Fonterra reduced its forecast for the 2011-12 season by 15c, citing the strong New Zealand dollar, higher global milk production and uncertainty in international markets.

Mr Bagrie said countries, such as China, contributing to increased dairy demand would not "sit back" and simply watch global demand grow 8%, but would become producers themselves.

"There is going to be huge volatility between supply and demand each year," he said.

Another factor to consider was other countries, such as Japan and European nations, debasing the value of their currencies.

The US example of "quantitative easing [printing money]" to force down its strength and make gains for its exporters would continue to hurt New Zealand's exporters.

"The dairy sector is going to have to take this all on the chin," Mr Bagrie said.

While record milk volumes helped Fonterra increase its half-year net profit by 18% to $346 million, and raised the prospect of hitting $20 billion in revenue this year, Mr Bagrie cautioned this was to a backdrop of declining commodity prices.

In March, Fonterra set a world record for milk powder production when its Edendale drier 4, the world's biggest, processed a record 20,826 tonnes.