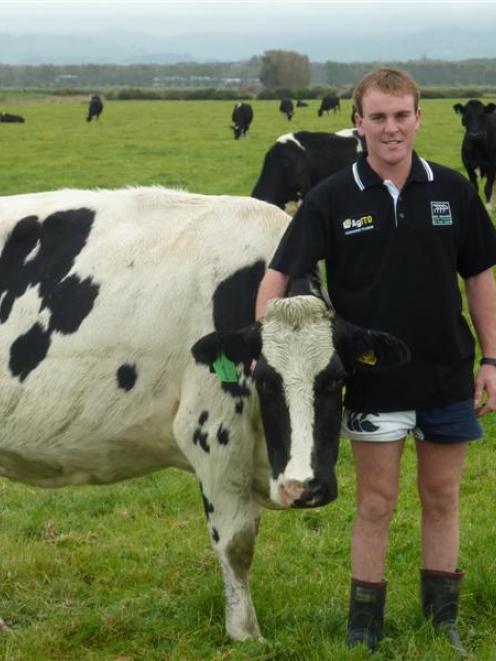 Mr Morrison (22), who won this year's Otago dairy trainee of the year in the New Zealand Dairy Industry Awards, has completed training with AgITO from levels 3 to 4 and is enrolled in the national certificate in agribusiness management, agribusiness resource management, level 5.

He hopes to go on to complete the national diploma in agribusiness management, believing the financial and business planning part of the diploma would be very beneficial.

Mr Morrison is fifth generation on the 400-cow farm at Inch Clutha, where he works as 2IC.

After leaving school, he went straight on to the farm. He enjoyed working with animals and being in the outdoors. The family also did their own silage and agricultural work, which added variety to daily work.

He learned a lot of practical skills while working alongside his father, Stewart, while his study assisted with his management skills.

He recommended others in the dairy industry train through AgITO.

"You need good staff out there. If you're training, you're learning and getting qualifications to prove you know what you're talking about. Training makes for better staff."

Entering the dairy trainee of the year award was a good challenge and he encouraged others to give it a go - entries for the 2012 awards open on November 1.

He was thinking about entering for other titles in the future.

"I entered to meet like-minded people, see how much I knew and what I needed to work on. The interviews and judging were pretty tough; I had to study up on a couple of things."

The best part was the study tour he and the other regional dairy trainees of the year went on in Southland before the national finals in May, which he described as "awesome".

"It was really good to visit farms down there and see how other successful people farm." His training adviser, Russell Stuck, said he deserved the win.

"He is a quiet achiever who has completed his modern apprenticeship with us. Setting objectives every three months has really helped him to get ahead."

Mr Morrison said that in the long term, he would like to take over the family farm, but he was not sure what route to take there. He has discussed with his father the possibility of sharemilking on another property.

Mr Morrison is chairman of the Clutha District Youth Council, which is a standing committee of the full council, so its view is regularly heard at the full council table.

He joined four years ago as a workplace representative and is in his second year as chairman. It was a voice for young people in the district, he said.