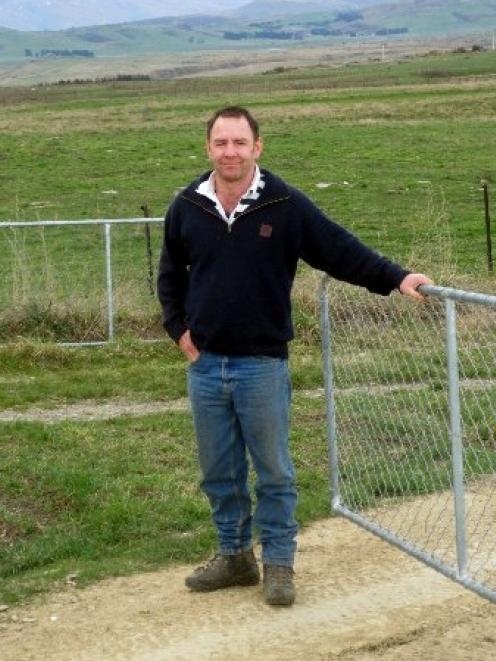 Sheep Industry Trainer of the Year Kevin Smith on the property he manages at Middlemarch. Photo by Justine Smith.
Kevin Smith loves farming and he enjoys passing on his knowledge and skills to the younger generation.

No-one was more delighted than the woman who nominated him, AgITO's Rebecca Williamson-Kavanaugh, who was ''extremely excited'' and very proud.

''He's been doing this for 17 years, quietly in the backblocks. He has contributed a terrific amount to New Zealand youth and no-one knows,'' she said.

Originally from Ashburton, Mr Smith was part of the farm cadet scheme for three years after leaving school.

After several years overseas, he returned to New Zealand and, as farming ''wasn't really paying well'', he worked at a freezing works and for Fulton Hogan and ''did a few different things''.

Once children arrived, the Smith family moved to North Canterbury for five years, where he was stock manager at a Cheviot property, and then shifted to Mount Peel Station in the mid-1990s.

That was followed by a stint at a farm at Mayfield, before the family moved to Middlemarch four years ago, where he runs a 6500ha sheep and cattle fattening operation for corporate farmer Greenfield Rural. The operation employed four permanent staff and a ''huge'' amount of casual labour, he said.

For the past 17 years, Mr Smith has employed a steady stream of graduates from Telford, Lincoln University and AgITO programmes.

He has trained more than 30 young people as shepherds. Many arrived with limited skills but invariably left confident in pursuing the next phase of their career.

Mr Smith said he enjoyed working alongside young people and trying to motivate them into farming. He had learnt from others in the past and had ''been there, done that'' and he hoped to pass on his knowledge and ''hopefully, give them a good experience''.

Some were now successful head shepherds, 2ICs or managers and it was good to see them progressing through the ranks, he said.

His wife, Justine, was an integral part of it - ''she bloody near adopts the boys'' - and, as they were often only 17 or 18, the couple tended to ''be like their parents, really''. While there were times his patience could be tried a little, there was also a huge amount of fun, he said.

Mrs Williamson-Kavanaugh said taking on young people was a ''huge undertaking'', yet Mr Smith was extremely patient with them and had given them ''their foot in the farming industry''.

It was his first year out of Lincoln University and it was ''good to have someone like Kevin to get you back into the practical side of farming'', he recalled.

He described Mr Smith as a level-headed, sound man, who could tell his staff how things were done in an easy and clear manner, which was ''quite a skill''. The Smiths also made staff feel very comfortable in both the working and social environments, he said.

Mr Bielski was thrilled Mr Smith had been recognised in the awards, saying he was an unsung hero. It was not an easy job taking on ''young fellers'' and it could be very frustrating.

''These are the sorts of people we are trying to highlight as an example of what can be done in our industry and what it's like to be a patient and a good communicator.''

Coincidentally, Mr Bielski was also on stage during the awards, with Mount Linton's Suftex winning the SIL-ACE terminal sire for lamb growth award.