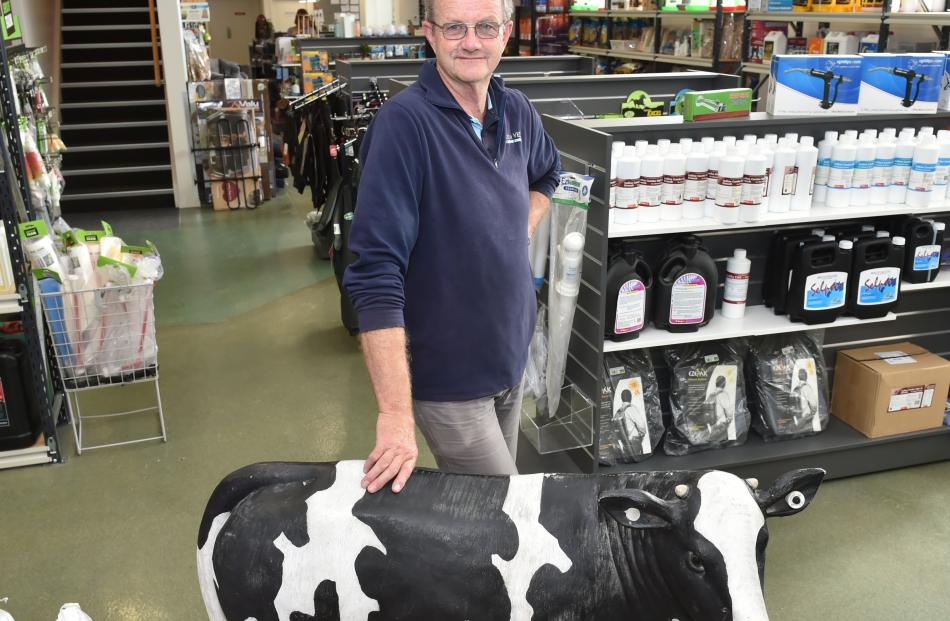 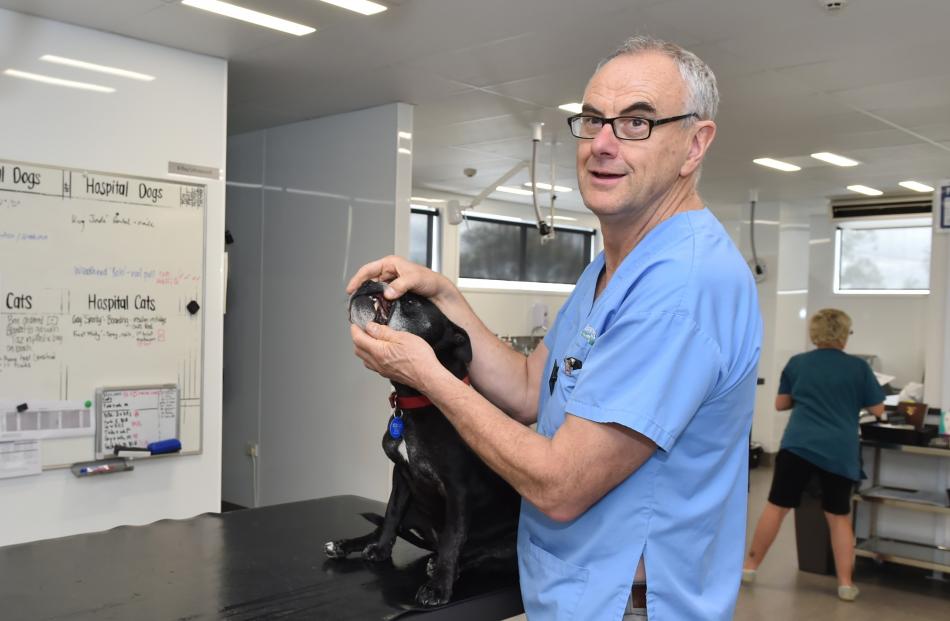 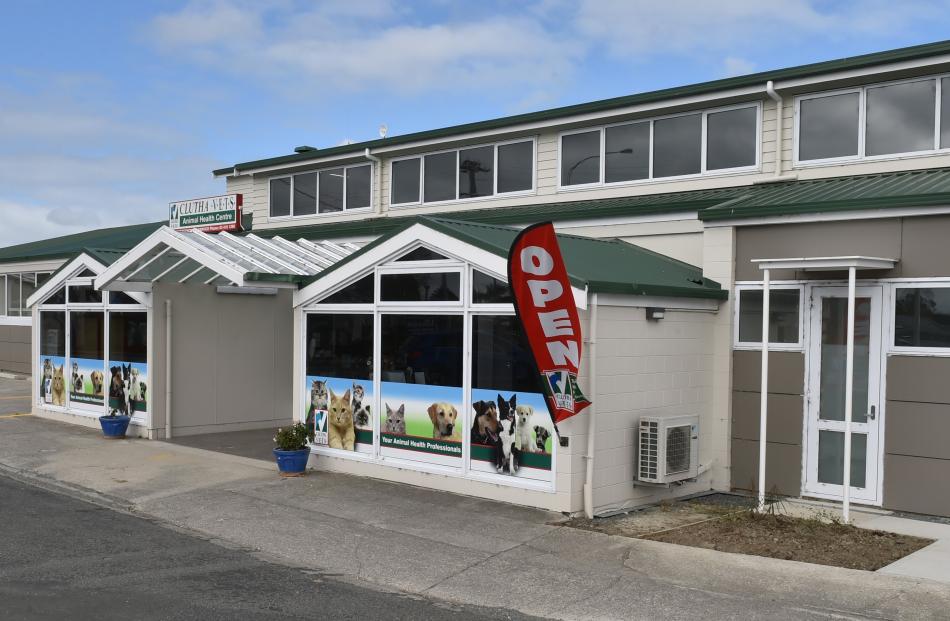 When Clutha Vets senior vet John Smart joined Clutha Vets as a young graduate back in 1976, it was a very different place to what it is now.

The business employed two vets in Balclutha and one in Milton, with a total of three other staff.

Forty-one years later, Mr Smart is still there but staff numbers have grown to 20 vets and a total staff of between 45 and 50.

This month, Clutha Vets will celebrate a recent $3million redevelopment of its Wilson Rd premises in Balclutha.

The official opening is on April 20.

The last upgrade was in 1994-95. At one stage during the most recent rebuild, Mr Smart worked out only one more staff member was needed for it to have tripled in size since that last redevelopment. Obviously, the building had been ''bursting at the seams'' while, cosmetically, it was also looking a little tired, he said.

There was quite a lead-in time before the first hammer appeared. Mr Smart drew up a proposed floor plan and gave it to staff in each area in the building to seek their input before the design was finalised.

As well as better facilities and more space, the new design also enabled much better flow, he said.

The 18-month building project did cause considerable disruption at times, including noise and dust, and last winter the top of the south side wall in the retail area was exposed to the elements. Retail staff had to wear their puffer jackets indoors and their breath could been seen at times.

But the building team did a ''bloody good job'' and he expected it would be one of the bigger building jobs in the district in recent times.

A lot of effort went into insulation and having a ''green'' redevelopment. Another advantage of having a good workplace was attracting staff, as it could sometimes be ''a bit of a battle'' to get vet staff to come south, he said.

Clutha Vets has a history spanning more than a century, which was detailed in a book compiled to mark 100 years of the Clutha Veterinary Association in 2008.

A group of farmers banded together to form the association on January 15, 1908. It was not known who first mooted the idea either for a vet in the area or the association but interested farmers were invited to apply for membership.

At the request of the Minister of Agriculture and the association, the chief government veterinary officer selected a veterinarian in Scotland and John Danskin commenced practice in early 1908.

He worked under the auspices of the committee until 1915 when he proposed taking over the business himself. In March that year, the affairs of the association were wound up, but it was later reactivated in 1929 and a decision made to apply for incorporated society status.

From that time on, the Clutha Veterinary Association has had an uninterrupted connection with the veterinary work of the Clutha area, although the rules have changed dramatically since then.

It was decided in 1972 to purchase the Gough Gough and Hamer building in Wilson Rd to allow relocation of the association into a building that would allow it to expand and grow and provide a more modern veterinary service to fit the needs of clients.

If it was not the oldest veterinary practice in New Zealand, then it was certainly one of them, Mr Smart said.

The practice was now managed by five vets, including Mr Smart, while farmers paid an annual subscription. Farmer members probably numbered about 1000 and there were also some small animal owner members as well.

''Technically speaking, farmers own this. It's their business. That's one main reason we do have pretty good loyalty and support,'' he said.

Brought up on a Mid Canterbury sheep and cropping farm, Mr Smart graduated from Massey University with a degree in veterinary science in 1975.

He joined Clutha Vets in January the following year and while initially involved in the full range of mixed practice activities, latterly his main interest has centred on sheep health and production.

Much had changed since he started work. Farmed deer had been ''invented'', which proved to be quite a learning curve, and there were now a lot more procedures in small animals.

The growth in dairying was probably responsible for much of the increase in large-animal vets, while farmers had become much more conscious of better nutrition for their working dogs.

There was also a move to ''being the ambulance at the top of the cliff, rather than the bottom'' - with a shift to concentrating more on prevention and production.

Technology was much improved; in the early days, when Mr Smart was on call after hours, his wife Lois had to stay inside the house to answer the phone.

While he reckoned he could not remember many of the entertaining stories over the years, there was a call-out to a cow having trouble calving that stuck in his mind.

The elderly owner informed him the cow was not in the cattle yards - ''that's always a recipe for a great waste of time, catch the patient first'' - and, as he set off to the arranged meeting point at the yards at Papatowai, he hoped by the time he got there, it might have been yarded.

But there was no such luck. The owner turned up with a neighbour, armed with ropes and about 10 dogs between them.

The cow was in an area about 5km from the yards, in a reasonably steep paddock on the south side of Papatowai between the road and the point where the big wave surfing was done. The paddock was bordered on both sides by native bush with no fences - and no sign of the cow.

The dogs were let loose and sent off into the bush and, in due course, there came the sound of a cow bellowing and much barking.

The cow was found but she sank to her knees and refused to budge on a steepish slope in the middle of a cold mountain stream, facing uphill, meaning access to the rear end was somewhat limited, let alone wet and cold.

As he settled down in the stream to remove the calf, entertainment was provided by the din of the 10 dogs excitedly shredding possums in a nearby rotten hollow tree stump. If nothing else, it took his mind off the rather uncomfortable position he was in.

Mr Smart, who is in his 60s, was now dealing with the grandchildren of some of his original clients.

He still enjoyed his job saying most farmers were ''just good salt of the earth ... generally pretty good buggers''.