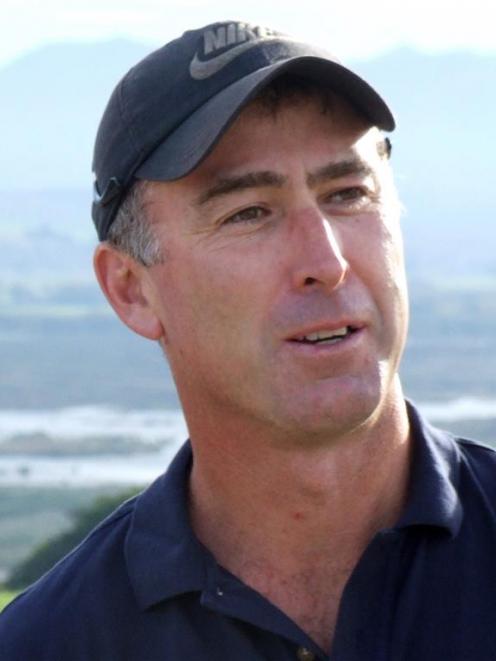 Reuben Allan farms on the north bank of the Waitaki River. Photo by Sally Rae.
Reuben Allan's dairy shed has one heck of a view.

It overlooks the vast Waitaki River which provides not only recreational opportunities for his family, but also has allowed them to transition from a "feast or famine'' dryland operation to one with reliable irrigation.

Mr Allan grew up on Fairway Farm, which used to be a dryland sheep property, near Ikawai.

Irrigation began on the hills in the mid-1990s and the move was made into intensive beef finishing.

Being a farmer was not always on Mr Allan's agenda. After leaving school, he completed a science degree at the University of Otago.

He spent five years overseas, working in a bank and as a builder in London, hosting a New Zealand agricultural show in Japan and spending time in Australia.

Returning to New Zealand, he sold fertiliser before being offered a farm manager role at a property milking 2000 cows at Ashburton.

From there, the opportunity arose to return to the family farm and it made sense with his experience to convert to dairy.

A 54-bale rotary shed was being built and the Allan family started milking 750 cows in the spring of 2009.

It was a self-contained dairy unit with wintering on the property.

Mr Allan was now slowly buying out his family's share of the farm and, in addition, has purchased two neighbouring blocks.

There was 350ha irrigated, 80ha via centre pivots and the rest by a K-line system, and there was potential to irrigate another 700ha.

He was waiting for consent to undertake that development, although a more positive outlook in the dairy industry was also needed before that would be undertaken.

If consent was gained and it went ahead, it would potentially add another dairy shed, if not two, to the operation.

For Mr Allan, water on his property meant consistency, both with grass growth and the ability to maintain stocking rates.

Being efficient with water was essential.

Having K-line irrigation on the hills was a challenge and it took some skill to get it accurate, and knowledge to make it efficient.

Wetlands have been developed, creeks fenced off and native trees planted.

Irrigation gave the area not only opportunities with farming but also had strengthened the community as a whole.

There were opportunities for new businesses to flourish and nearby Waimate was "moving forward'', he said.

Waihao Downs School, where he was on the board of trustees, had seen growth in its roll, new classrooms built and development of its grounds, also now irrigated.

It had allowed the area to become more diverse, with many different cultures living within it.

The Waitaki River was a "magnificent'' river which had produced an exceptional valley, Mr Allan said.

Within the valley, there was the usual challenge of maintaining a suitable balance between farming development and protection of that "amazing'' environment.

He believed that was done very well.

It was a good example of how development could be integrated into a unique environment and both could thrive.

Mr Allan enjoyed the opportunity to live and farm within the community and he enjoyed taking his two sons to fish, swim, boat and hunt in and around the river.