'Wiggy' working to better his skills 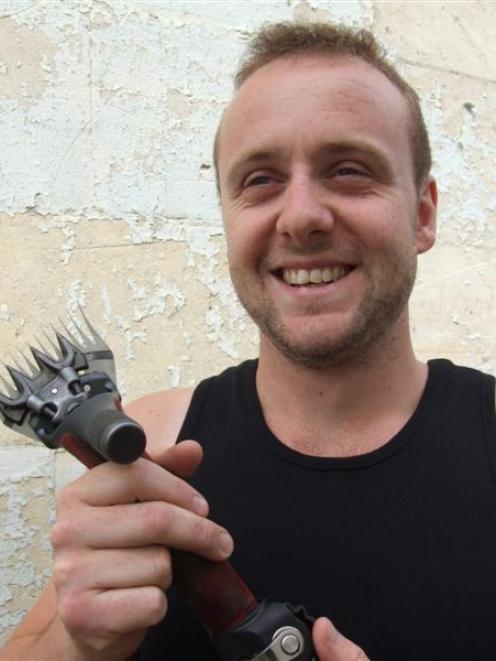 Welsh shearer Paul Davies says he has improved his shearing skills since working in New Zealand.
Meet Wiggy from Wales.

Paul ''Wiggy'' Davies has been in North Otago working for shearing contractor Owen Rowland, having met Mr Rowland when he was over shearing in Wales.

Mr Davies (27), who had been shearing with former Oamaru man Grant Rowland, now living in Wales, wanted to improve his shearing.

''One good thing about shearing, it does get you around the world a bit,'' he said.

A builder by trade, he grew up on a sheep and beef farm in mid-Wales and started shearing three years ago.

He shore for three seasons before coming to New Zealand, but the seasons were only two months long, so he only had about six months of proper shearing experience, and it had been a ''big learning curve'', he said.

In Wales, woolsheds were a rarity, sheep were mostly shorn in paddocks.

''You just drive into a paddock and set up,'' Mr Rowland said. Sheep were much smaller than in New Zealand and had less wool on them. The wool was more hairy and there was much less preparation of the wool. Rather, it was just rolled up. The days were also not as structured as in New Zealand, with shearers staying until the job was finished.

Mr Davies arrived in New Zealand on January 5 and will finish shearing on February 25. He will then be joined by his partner and they will travel around the South Island before heading home on March 15, in time for lambing on the family farm.

It was his first trip to New Zealand and while it was ''pretty much'' what he had expected from things he had heard, it was very different from home.

It was a lot hotter, there were a lot more cows than he expected and he was also interested in how irrigation was ''a big thing''.

He was pleased his shearing had improved markedly since he had been in the country. He hoped to come out again next year to work but he would know what to expect and train for it, he said.

Mr Davies had managed to fit in plenty of activities alongside shearing. He had been to Mt Cook and the Moeraki Boulders, caught a trout and been night-shooting, hunting and snorkelling.

It had been a ''brilliant'' time and he had enjoyed his stay in the South, particularly seeing at first hand the different styles of farming.

In the UK, sheep farming was ''not very good'', with people questioning how it could continue. There were also high feed costs, he said.

Other issues faced by farmers were increasing compliance and ''red tape''. Mr Davies was the third generation on the family farm and he, his father and his 80-year-old grandfather had been shearing together.

The property was about 129ha but they had grazing on 2020ha of hill country behind the farm on the commons. He had his own sheep and was building his flock numbers.