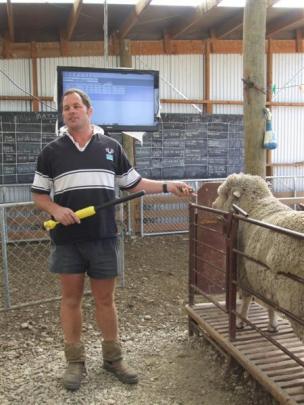 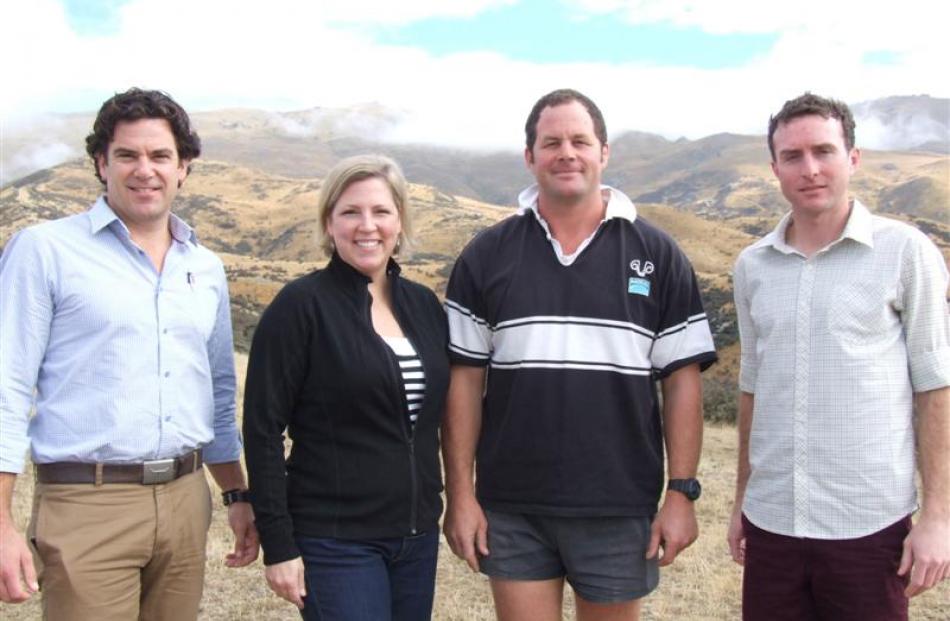 Andrew Paterson displays some of the modern technology he uses in his sheep-breeding operation at Matakanui Station. Photos by Sally Rae.

When Andrew Paterson visited a factory in the United States that turned his fine wool into socks, he came away feeling extremely positive about the future.

Mr Paterson and his wife, Tracy, from Matakanui Station, near Omakau, are among the growers contracted to supply fibre to SmartWool, through the New Zealand Merino Co (NZM).

SmartWool, which has been working in partnership with NZM for 14 years, is an outdoor apparel brand which has direct supply contracts with NZM for ZQ Merino fibre for use in its socks and garments.

With some ambitious growth targets in place, SmartWool is now trying to get the message across to New Zealand farmers it needs more wool.

Based in Steamboat Springs, Colorado, SmartWool is a wholly-owned subsidiary of the VF Corporation, which also owns such other well-known brands as Wrangler, Timberland, The North Face and Lee.

In October last year, Mr and Mrs Paterson, along with Allan and Karleigh Small (Goulburn Station, Central Otago) and Mark and Sue Rutherford (Gola Peaks Station, North Canterbury) travelled to the US and took part in various SmartWool retailer events focused on educating consumers about the performance and environmental benefits of merino fibre.

Mr Paterson recalled how there there were ''lots of really curly questions'', many people thinking the sheep had to be killed to get the wool off them, and they were ''quite blown away'' to learn that some sheep were 10 years old.

Watching the socks being made - SmartWool socks have more than 70% market share in US specialty retail - Mr Paterson said he was impressed with the pride the employees took in making them.

There was no compromising on quality ''from the start to the finish'', and he returned home thinking the brand was ''going to be pretty secure for the future'', and pleased he was ''in the right place''.

For Mrs Small, the trip ''connected the dots'' and completed the circle from raising the lambs, to shearing, to seeing the socks being knitted and then meeting the customers who loved the products.

Although the couple lived and worked in a remote part of Central Otago, they had close links with a global brand and millions of consumers.

Mr and Mrs Paterson and Mr and Mrs Small were among a group of SmartWool suppliers who were recently visited on-farm by SmartWool representatives Kim Kourkoules and Blane Joyner.

For Ms Kourkoules, the company's director of sourcing and logistics, there were serious benefits to be gained from meeting growers.

In the job for less than a year, it was her first trip to New Zealand and she found that making the connection between the beginning and the end of the supply chain was a ''big eye-opener''.

It provided an opportunity to see first-hand and gain an understanding of the issues that farmers faced and the conditions in which they farmed. To be able to see the commitment at all levels was part of what made SmartWool special, she said.

NZM commercial manager Craig Adams said NZM wanted to keep the relationship between the growers and end user as close as possible.

There were 150 fine-wool growers in New Zealand contracted to supply fibre to SmartWool and SmartWool contracts for the 2013-14 season were worth about $16 million.

Looking to the future, SmartWool had some aggressive growth targets, Ms Kourkoules said.

Previously owned by Timberland, the company was bought by VF Corporation in June 2011. Over the next five years, SmartWool was expected to double in size.

Mr Adams was confident that New Zealand suppliers could meet that demand, saying much was being invested in looking at ways production could be increased to meet those growth targets.

With assistance from the Government's Primary Growth Partnership, NZM has been investing in production science initiatives to unlock the potential of ''the perfect sheep'' - a sheep that was healthy, fertile and high-producing, with high-quality meat and wool.

Mr Adams believed there was much more land that had the potential to be fine wool sheep properties and he reckoned it was a ''really exciting time'' to be in the industry.

Never had there been as much change and as many things happening as now, he said, Mr Paterson agreeing the level of investment in research and development was exciting.

At Matakanui Station, about 200 rams were sold each year and Mr Paterson was encouraging ram clients to come on board with SmartWool contracts.

Aside from the monetary value, the contract provided security for the grower, Mr Adams said.

Mr and Mrs Paterson also have had a contract with Alpine Origin Merino Ltd, a joint venture between NZM and Silver Fern Farms for meat and co-products.

With the possibility of irrigation in the future on some of the 9000ha property, there was the potential that sheep numbers could reach 40,000, which would also mean more wool to SmartWool.

While he was in the US, he realised how important the ''clean, green image'' was to New Zealand in its overseas markets, Mr Paterson said.

Before he went away, he admitted he was ''ho-hum'' about water quality parameters, but now he was ''more for it'', saying they were needed to maintain that image.

The Patersons have made a significant investment in technology, which Mr Paterson demonstrated to Ms Kourkoules and Mr Joyner during their visit, the information gained being used to breed sheep specifically to meet SmartWool contracts.

As ram breeders and sellers, they wanted to be at the forefront, which was why they had invested so much money on the gene side and technology, he said.

Matakanui Station has won the supreme champion fleece at the Canterbury A&P Show seven times in the past nine years.

The Paterson family prided themselves on the amount of wool their animals produced. ''If people want good wool and lots of it, they come here,'' he said.

For Mr Joyner, it was exciting to see the investment being made in the fine wool industry in New Zealand, and the technology and commitment Mr Paterson put towards producing wool for SmartWool contracts was ''great to see''.

SmartWool's mission was to be the global leader in active outdoor fine wool apparel. The foundation for that was ZQ fibre supplied through long-term partnerships between SmartWool, NZM and growers like Mr Paterson, Mr Joyner said.

New Zealand was renowned for the quality of fibre that was grown in terms of micron, strength, whiteness and brightness.

Asked what he thought of the country in which merinos were farmed, he said ''it's 100% pure New Zealand; it's beautiful; it's pristine.''