Working on NZ farm `a blessing' 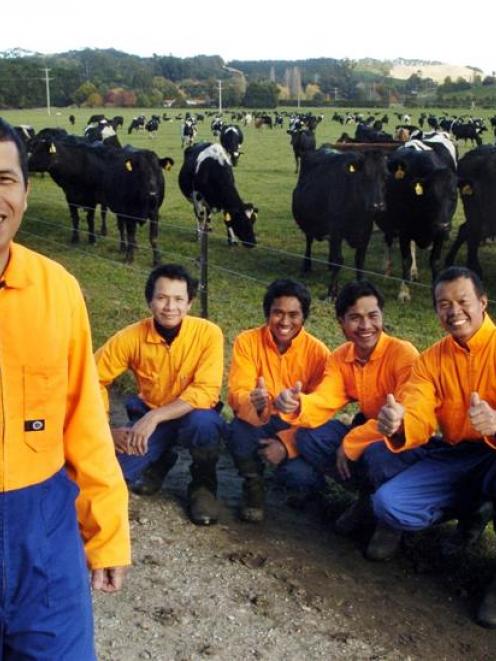 Six of the seven Filipinos who work on Greg and Kelly Kirkwood's North Otago dairy farm are (from left) Neil Molina, Reis Pe, Eric George, Saldy Barroga, Roel Gonzales and Jeorge Barroga.Photo by Gerard O'Brien.
The reason Filipino farm worker Neil Molina entered the New Zealand dairy industry was no different than for thousands' of New Zealanders - to have a career.

Mr Molina has worked for Oamaru sharemilkers Greg and Kelly Kirkwood since 2003 and is one of seven Filipinos working for the couple, the winners of this year's Otago Sharemilker of the Year title.

Mr Molina has risen to second-in-charge of the Kirkwoods' 1700-cow North Otago herd and next year will manage their 700ha, 2100-cow farm in the Maniototo.

He will be in charge of 13 staff, of whom 10 will be fellow Filipinos.

Mr Molina said coming to New Zealand was an adventure, but also an opportunity to improve his skills.

"New Zealand is at the forefront of the dairy industry in the world.

''I want to know more about the industry and their technology," he said.

In the Philippines, Mr Molina worked on a 300-cow dairy farm and his father had a herd of 150 cows, but the high cost meant there was little hope of him owning a farm.

"We don't have those systems like here in New Zealand, unless you are really, really rich."

But he saw the possibility in New Zealand.

The transition for Mr Molina, wife Myra and their three children was more than just adapting from a hot, humid climate to New Zealand's cool, temperate environment, but also the large volume of work.

Labour was plentiful and cheap in the Philippines, so as many staff could be employed as was wanted.

Mr Kirkwood said he paid his Filipino staff the same rate as New Zealanders and provided accommodation and training.

The migrant workers had a better attitude and were keener to learn than some young New Zealanders he had employed.

Mr Molina said he was looking forward to moving to the Maniototo and taking on a new challenge, even though a Central Otago winter might be colder than anything he had experienced to date.