The winters are traditionally quiet, but businesses say they have always had a rainy day kitty to keep them going after a fruitful peak season.

That has all but dried up for many after three disrupted summers of flooding, bridge washouts and now Covid-19.

Campervans have become a rare sight on the main street of Franz Josef these days.

Westland District Councillor and local businessman Ian Hartshorne was not sure if people were aware of how bad the situation is on the ground.

Their town and the surrounding glacier country relied on tourism - and had been pushed to embrace it by previous governments and not to diversify, he said.

Now, several businesses are left teetering on the edge.

"If you're a dairy farmer and they said you couldn't export milk, what would they do? And that's exactly what's happened here in reverse.

His company Franz Hire & Contracting was preparing a road for new commercial sections as part of the government's shovel-ready scheme.

Without that, he said he would start looking at taking his business somewhere else.

He was grateful for the New Zealanders who had visited, but said it was not enough to keep closures at bay.

"If we don't get open [the borders] this summer, here's going to be a lot of businesses that'll fold and just move on."

Franz Josef was a resilient community, but Hartshorne said the true extent of the hardship was often hidden behind brave faces.

And people were leaving and already emergency services were feeling the pinch.

"All that gets on the blink because they haven't got enough staff for a call out so everything just goes down the line. It started at the front where you sell a tourist trip or something like that. But it's down to the plumbers, the builders. It's everybody." 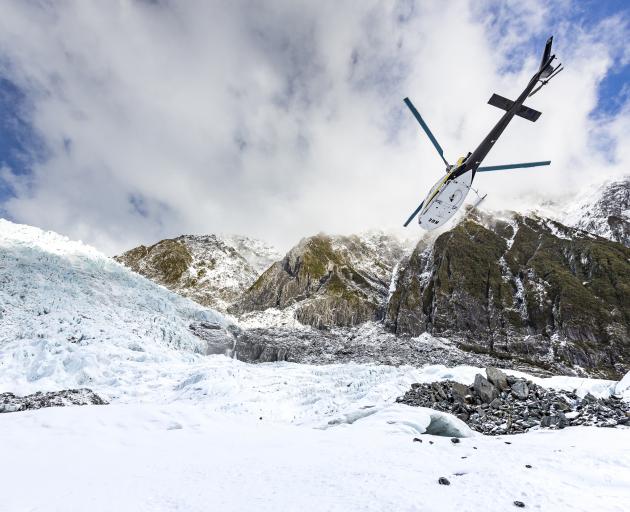 Cancellations were rolling in and he was not seeing many forward bookings, he said.

Instead, he was speaking with his business partners, landlords and banks to see what more they could offer or whether closures were on the cards.

"We're feeling pretty exposed and vulnerable. The feeling around town is quite raw. We accept and understand and support the concept of closed borders, and we accept the position we're in as far as getting through it together.

"However, we feel as though we're taking more than our share of the burden."

It would help if businesses could claim back some of the many tax dollars paid over the years, Haugh said.

He encouraged more New Zealanders to explore the West Coast.

"That's a gamble I took and I'm still quite comfortable that I took it. For my two businesses, having the ability to sell a package of accommodation and a meal with a hot tub has definitely increased my resilience and my ability to get through to the other side."

HeliServices chief executive Grant White said they were holding on before the latest lockdown but now they were going downhill.

"For August, we were 45 percent down on August of last year and September of this year, we're 84 percent down so far this month and we're halfway through the month already so at the moment we're going to struggle to make enough money to pay wages for the month."

The Civil Aviation Authority has been keeping a close eye on helicopter companies to ensure they can cover safety and maintenance costs.

White said the wage subsidy had helped, but it could only do so much.

And the bills kept coming.

"We've gone out and borrowed money to actually keep going. We could see that there was no short end of this so yeah ... all the fixed costs. They don't go away."

Emergency services were having a hard time and struggling to find and keep volunteers, White said.

"They have no certainty either. If any volunteer turns up new, how long are they going to be here? So they start training and then they're gone. It's a similar situation to us. We need good, consistent, trained people to service the community and the area."

He wanted to see a higher vaccination rate, saying the rollout had been incredibly disappointing and slow.

Allan Glen runs The Terrace Motel and 10 Cottages, and said he was preparing for a good September and October.

"Just been decimated and if you looked at the town over the last four, five weeks, it's just been like a ghost town, and we're not the only people to be hit. The restaurants and all those guys have been suffering also."

Even with government support, he said his income wasn't covering all of the bills so he was delving into his savings.

Despite this, he remained optimistic that the situation would improve once Aucklanders could travel again.

Jacinda Ardern and her government are the blame for this. They had $50 billion left over after the last lockdown... but it all disappeared like a lolly scramble and this lockdown most businesses got one resurgence payment only.
Its been absolutely appalling how the Auckland breakout has been handled.
Auckland coughs and the whole country gets held to ransom.
I wonder if all the businesses who left the South Island and moved to Auckland still think it's a good idea.
It's just a pity the banks and Inland Revenue didn't have a heart.
Don't worry Franz, I'm sure you will bounce back.