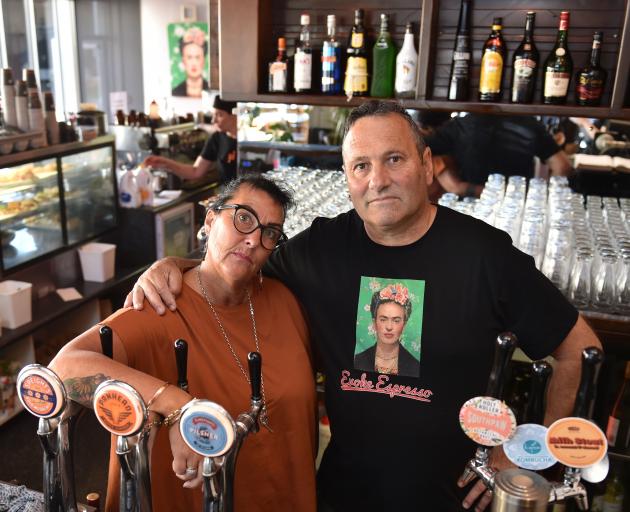 That is why they had been trying to sell their business Ironic Cafe and the accompanying Ironic on George outlet before any of the Covid-19 effects took hold.

‘‘We’ve been in business now for 13 years here and ... in that time we’ve both lost children and both carried on,’’ Mr Wilson said.

‘‘As far as keeping going in that time ... it’s with the fact that they [their sons] wouldn’t want us to be sad, and they were great boys.

‘‘There’s no point thinking about how sad we are — we’ve kept a brave face and carried on.’’

Mr Wilson’s son, Ashley, died in Wanaka in 2014 of an aneurysm that went to his heart; Luke Keenan, Ms Moller’s son, died in a car crash in Palmerston North in 2015.

‘‘We felt that after 13 years and carrying on, we’ve done amazingly well, both of us,’’ Mr Wilson said.

‘‘The reason for selling the business was because of that.’’

Now they wanted the chance to move on, he said.

‘‘It’s full-on in the business. Don’t get me wrong — we love the whole hospitality thing.’’

In a few days, the picture had changed ‘‘dramatically’’, Mr Wilson said, in light of the Covid-19 outbreak and the rules that were changing every day.

‘‘This is really, really serious.

‘‘It’s not like my parents going through the Depression. This is, like, way worse in my opinion.

‘‘At that time, you would have closures but businesses still stayed open. In the States, they’ve had complete shutdowns of populations that are way bigger than New Zealand.

The pair were going to speak to their accountant to get an understanding of what they might be entitled to from the Government’s business continuity package announced on Tuesday.

‘‘We haven’t got the same numbers coming through the door. Our staff realise that.

‘‘They’re all thinking about things, and my wife and I ... we’re in talks with them on a daily basis as to how this is evolving and what is happening.

‘‘The Government package yesterday — we’ll have a meeting with staff on Friday just to bring them up-to-date with that.’’

For now, they were putting on brave faces.

‘‘Right at the very moment, I’m putting up decorative lights for our outdoor garden area because one day this is going to be over.

‘‘We’ve also put in some things ... we’ve got Jenga, we’ve got darts and we’ve got giant Connect4, which is fun.

‘‘It’s got the sunlight on it. That’s the best place to be — in the sun and breathing in good air.’’