By Riley Kennedy
1 Comment
A Dunedin couple’s entry into the hospitality industry has been a baptism by fire, as they became the owners of a cafe two days before last month’s Level 4 lockdown.

On August 16, Donna Hall and Ivan Mason had their first day as owners of Cafe Mokha, on August 17, the country went back into lockdown.

The couple had no experience in hospitality but were looking for a long-term investment to work alongside their day jobs.

Ms Hall is a local business adviser and Mr Mason is the Inventors Lab manager at Petridish. 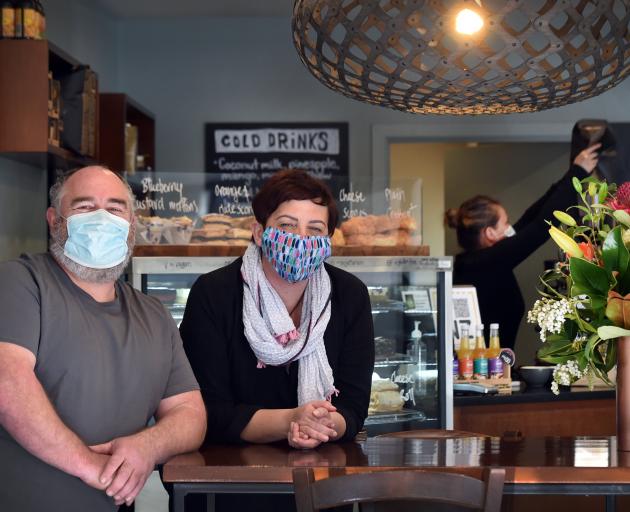 Dunedin couple Ivan Mason and Donna Hall took over their new cafe just two days before the move into lockdown. PHOTO: PETER MCINTOSH
So keen were they to become the new owners, the couple brought the settlement date for the cafe inside Otago House, in Moray Pl, forward a week

Day two of trading was like any normal day but it was not until the evening things began to take a turn.

‘‘I had been away for the day and I came in the about 6 o’clock and I was watching the Prime Minister on the phone while counting the till, it was a complete shock,’’ Ms Hall said.

Within 15 minutes of the lockdown announcement the pair and the cafe’s chef were freezing and giving away food to friends and family.

She admitted there was a moment when they had questioned whether they had made the right decision.

‘‘When we decided to bring the settlement forward a week, we’d made the decision and we’d got our ducks in a row and thought we were making it easy.

‘‘There were a couple of time where we thought ‘Damn it, what if we waited a week?’’’

They considered Covid-19 and its effects on the hospitality sector when buying.

‘‘We had last year’s books, which were based on a Covid year.

‘‘We understood the reality of it but I don’t think we anticipated it would happen on day two,’’ Ms Hall said, laughing.

She acknowledged that her business background helped but for other people in the sector who did not have that knowledge ‘‘it must be really really tough’’.

Ms Hall said the previous owner, who had had the cafe for about 17 years, had been a ‘‘huge help’’ to the pair.

Despite the rough start, the pair were optimistic and in good spirits about the future although business was down about 30% on the corresponding time last year.

I hope your business goes well. It is good that you can open and that we do not have to wear masks while eating and drinking.