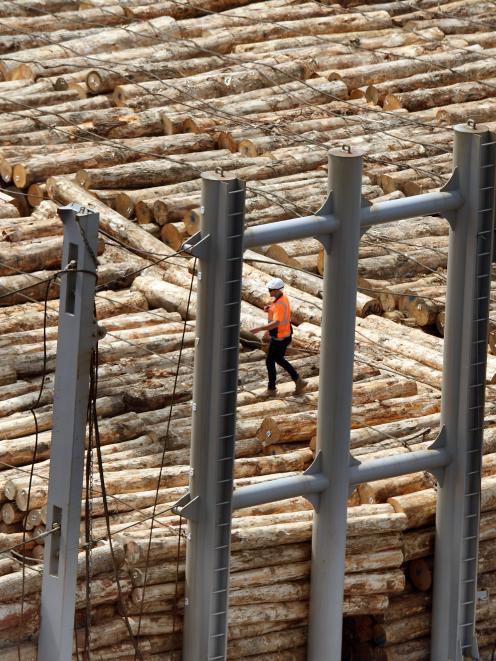 For the 11 months to November, New Zealand exported $2.41billion of softwood logs, surpassing previous records for any full calendar year and 75% of 2017 exports were bound for China,worth $1.81 billion.

While New Zealand forest owners may be reaping benefits from harvesting and exporting, the country’s processors and manufacturers are struggling to compete for high priced logs.

Not only had Chinese demand driven prices up during the past two years, a trifecta was created with generally favourable foreign exchange alongside very low shipping rates.

The price to move a cubic metre of wood from Dunedin to Asian destinations had averaged about $US45 during the past decade, but early last year that cost was in a range of $US13 to $US25 per metre during the preceding 18 months.

At present it was a "free-for-all" market driving the high prices and domestic processors could not compete against the "fly-in fly-out" traders, Dr Tanner said in an interview.

He acknowledged the situation was "open competition", but it was on a "tilted playing field", given industry subsidies existed in other countries.

The scenario was posing a threat for future local timber supply and was undermining goals to add more value to exports, Dr Tanner said.

"New Zealand is experiencing strong demand for logs from China, which has clamped down on harvesting its own forests and reduced tariffs on imported logs to meet demand in its local market," he said.

Reduced exports from Canada and Russia meant China would increasingly be looking to New Zealand and Australia to fill the void.

"I’d expect [Chinese] demand to keep increasing and to see more exports out of New Zealand and Australia," he said.

"It says an uptick in demand for wooden housing could see supply having to be met from overseas if the current situation prevails," Dr Tanner said.

He noted the high level of Auckland consents and requirements to achieve the KiwiBuild programme.

When pressed, he was adamant the scenario of importing sawn lumber to meet demand could become a reality.

While the new Government’s initiatives gave the industry more optimism about the long-term future, Dr Tanner said uncertainty remained around the shorter-term issue for the domestic market of more unprocessed logs heading overseas.

"We’re still very concerned about the competition in the market right now and where that is going and how that is going to be regulated and tackled," he said in a recent industry update.

Dr Tanner said expectations were Chinese demand was only going to increase.

Other wood exporting countries, such as Canada and Russia, supported their local industries while Chinese wood manufacturers benefited from subsidies, which created an uneven playing field for New Zealand processors.

Dr Tanner said the Wood Processors & Manufacturers Association would like to see the Government take a complaint to the World Trade Organisation.

Before the election, the industry was annoyed at the lack of attention from the Ministry for Primary Industries, believing it was more focused on food safety, agriculture, horticulture and biosecurity of the border.

"Forestry, it was felt, was at the bottom of the MPI pile and fronted by junior ministers and officials," Dr Tanner said.

However, post-election, the industry was in a more upbeat mood with the coalition Government’s commitments, including re-establishment of the Forest Service, planting more trees, focusing on regional economic development and its requirement of  greater scrutiny of overseas investment in forestry.

"We’re certainly on the radar now with the Government very much pushing in the right direction," Dr Tanner said.