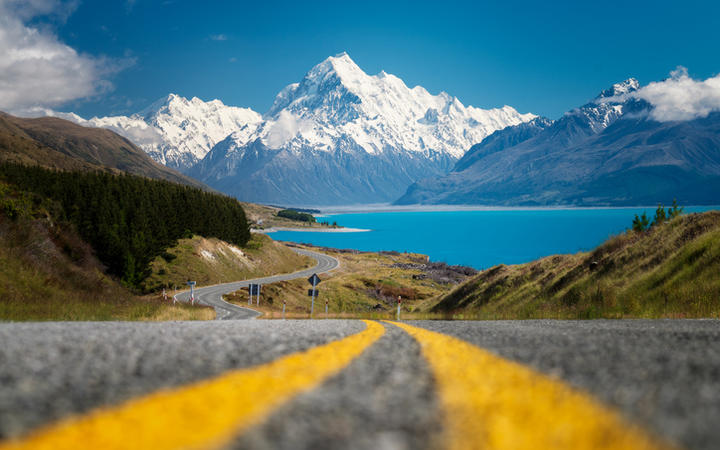 On the way to Aoraki/Mount Cook National Park. Photo: Getty Images
Bookings are steadily streaming into businesses in the Mackenzie District ahead of borders reopening next month.

With snow-capped Aoraki, turquoise lakes and star-filled night skies, the region was a favourite with international visitors, and when they were shut out, it suffered.

Many have been breathing a sigh of relief once the border reopening dates were announced, but businesses said there were more hurdles on the horizon.

At Mount Cook village, Alpine Guides was coming off a slow summer - usually its peak period - with guests levels falling to roughly 20 percent of normal.

Its general manager Arthur McBride said decent domestic winters, along with government support, had helped to keep its lights on - but it was looking forward to tourists returning.

"It will probably be a bit of a shock really. It's like a ghost town at the moment. There's plenty of bellbirds and wood pigeons flying around, and the odd rabbit. But not too many tourists. So it'll be nice having a few people in."

There has been a steady stream of bookings for next summer, including from across the ditch.

"For summer mountain guiding, which is like probably at least 50 to 60 percent of our summer revenue, was 70 percent Australian business.

"So that's a massive turnaround for us, and then we've got lots of Aussies that have been cancelling their ski bookings the last couple of years so I think it will make a big difference."

With only a handful of similar businesses in the country, he said competition was usually tight for the limited number of specialised staff.

But with some of his competitors in hibernation, he remained hopeful it would be less challenging to find staff, particularly as some were in the village.

McBride had ruled out looking overseas for staff if demand picked up and the other businesses returned.

When the mandates came in, Tekapo Springs general manager Jenny Koberstein said it shuffled around staff and managed to hold onto them.

"I've been proud that we've done that because they've been good staff, and now because of that and the mandates coming off as of next week, that actually prepares us for the borders opening."

She was worried about Covid-19 hitting the Mackenzie harder in time for Easter and the school holidays, but she said it had strategies in place.

"It's just a matter of if it hits us at that time, that's going to be quite devastating for our business."

She expected it would impact staff and potentially customers.

"If we get obviously in the next week and we start losing some staff, we'll be OK for Easter and school holidays.

"But if we all get it at the same time, that's going to be a bit of a different story."

There are pies a plenty at the Fairlie Bakehouse, with owner Franz Lieber already fielding more wholesale bookings.

While most of its visitors were domestic, he was trying to hire about 15 more staff.

"Hopefully we'll be alright with our Covid problems 'cos there's quite a few staff who are having the sickness at the moment. It makes it a little bit difficult managing the quantities of what people have required."

He was confident it was well prepared for borders to reopen.

"I think it looks really promising for us, because we invested quite a bit of money in this quiet period. So I've got better equipment, so hopefully when the staffing level is not there, the equipment will pick up. So that will help us quite a bit."

On the shores of Lake Pukaki, Lakestone Lodge co-owner Mike Bacchus has been fielding a lot of bookings since the border announcement.

"We had a request for a date in February next year, and it was the first time in two years I've had to go back to them and say 'look, we're sorry. We are actually fully booked already."

Gardening and other odd jobs has helped him to keep his seven permanent staff on the books.

"We are basically ready to go so we do have all our staff still onboard. They be a little bit busier than they have been in the last two years. We're fully staffed. We are 100 percent ready for action."

Kiwis have been a boon over the past two years and he hoped to host more over the coming years, Bacchus said.

But unlike recent times, he said they would need to book early or face missing out.