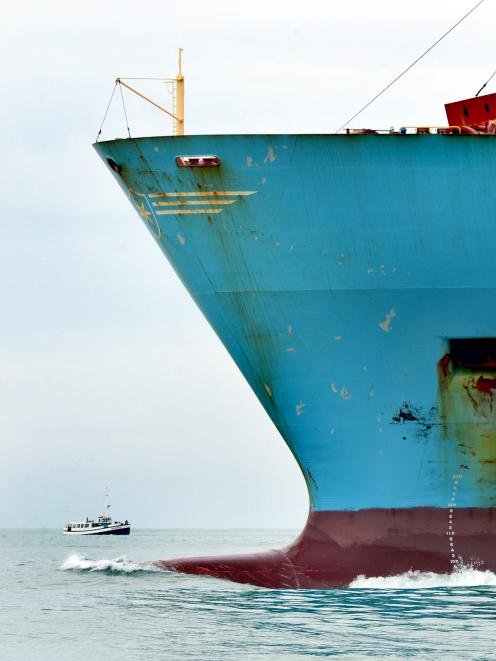 Maersk container ships such as Maersk Brani, pictured, will be replaced by Rio-class vessels which are 21m longer at 286m. In the background is the tourist boat Monarch, at the entrance to the Otago Harbour. Photo: Stephen Jaquiery
Monday's arrival of the largest container vessel to visit Port Chalmers in the past 47 years heralds a significant change for Southern export services.

Rio de Janiero will be the first of seven ships capable of carrying more than 5900 TEU’s (20ft equivalent units), calling at Port Chalmers every Sunday.

The change from L-class to the larger Rio-class ships is effectively an upgrade of shipping giant Maersk’s existing Southern Star network, meaning potentially up to an extra 500 containers per week through Port Chalmers during the peak export season.

Instead of weekly L-class ships which carry 4000 to 4500 TEUs, Maersk Rio-class ships can carry more than 5900 TEUs. They will travel to Southeast Asia, where containers can also be offloaded for delivery to the Middle East and on to Europe.

Maersk’s other southern New Zealand network, the Trident Service, will now come from Timaru’s Prime Port and tranship full containers at Port Chalmers, bound for Southeast Asia and beyond, before Trident takes other Southern exports on to North America.

Port Otago chief executive Kevin Winders was contacted in Australia and said while full-year forecasts had not been completed, at the top of the dairy season there could be an extra 500 containers a week arriving by sea  at Port Chalmers, for transhipment to the Rio-class ships.

He expected produce from Fonterra and Silver Fern Farms would make up the bulk of exports.

The older L-class vessels carry fewer containers and had a deeper keel draught of 14m, while the Rio-class was 21m longer, at 286m, but fully laden at near 80,000 tonnes had only a 13.5m draught, he said.

"This way we’ll be getting access to more container space. It’s a big deal for local exporters."

However, Mr Winders noted that off season there may be few, if any, extra TEUs arriving at Port Chalmers.

Port Otago would still maintain its Timaru to Port Chalmers rail service, which handles about 10,000 containers annually, and Mr Winders said it was likely to be a more attractive alternative to shipping for exporters south of Timaru.

Last financial year Port Otago had a 10% increase in container numbers, with 205,000 across its wharves.

Port Otago had dredged the shipping channel to near 14m deep, at low tide, so the new Rio-class vessels could enter and depart Otago harbour during any tidal phase. 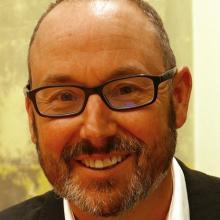 Kevin Winders
Mr Winders said while Port Otago had consent to dredge to 15m deep, it would focus on widening the edges of the shipping channel.

A weekly Maersk "blue ship" will arrive at Port Chalmers from Timaru each Friday, and Maersk’s Rio-class "red ships" will arrive on Sundays.

The Rio-class ships are liveried in the colours of Hamburg Sud, the shipping line which Maersk acquired last year.

Otago Chamber of Commerce chief executive Dougal McGowan welcomed the Maersk service upgrade, given the amount of risk and investment Port Otago had undertaken during the past decade.

Tens of millions of dollars had been spent by Port Otago, including cranes, attendant vessels, the just completed extension of the multi-purpose berth and deepening and widening of the shipping channel from near Taiaroa Head to Port Chalmers.

"This shows shippers have confidence in what Port Otago can deliver ... Port Chalmers is the choice for exporters," he said.

The now permanent Southern Star rotation will be from Tanjung Pelepas in Malaysia, to Singapore, Brisbane, Sydney, Tauranga, Napier, Lyttelton, Port Chalmers and back to Tanjung Pelepas.

Rio de Janeiro, is Singapore  flagged and scheduled to arrive at Port Chalmers about 9am on Monday, and depart Tuesday,  at 6pm.

It will be the largest vessel to call since the first container ship called at Port Chalmers in June 1971.

Before Port Chalmers, Rio de Janeiro was on Australia’s east coast before stopping at Napier, Tauranga and Lyttelton.