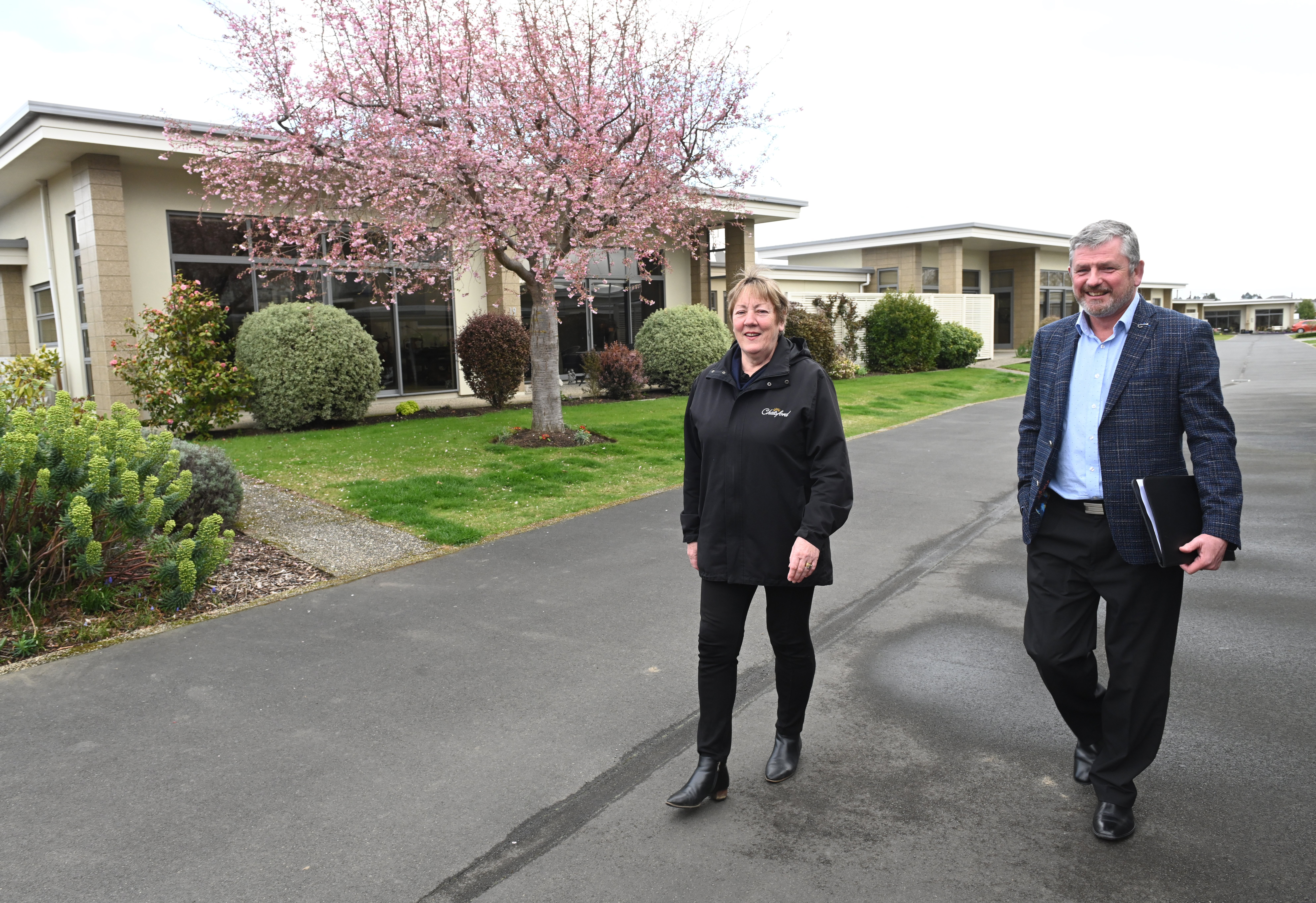 Celebrating Chatsford Retirement Village’s 30th birthday are marketing and sales manager Dawn Brieseman and chief executive Malcolm Hendry. PHOTOS: LINDA ROBERTSON
What was deemed to be a pioneering idea in the early 1990s has become a common way of living for retirees. After opening with three townhouses in September 1991, Chatsford Retirement Village has grown to become a mini town in the heart of Mosgiel, as Riley Kennedy reports.

"It was just one little lonely light in the middle of a paddock."

Chatsford Retirement Village marketing and sales manager Dawn Brieseman was talking about the one resident who moved in a few weeks before the village officially opened for business 30 years ago on September 14, 1991.

The idea of resort-style retirement village living was new and looked back on now as pioneering, Chatsford chief executive Malcolm Hendry said.

The village, now housing 330 independent retirees in 267 units, was founded by Peter White and Wayne Hanley.

He and Mr Hanley recognised that, as the business grew, there would be an opportunity to build a village around it.

They went to a retirement village conference in Australia and "the rest was history", Mr Hendry said.

The main entrance to the village.
Ms Brieseman, who has been there from the beginning, remembered the opening being "a very busy day".

"Workmen’s boots were out the front and basically Richard Walls (then mayor of Dunedin) had to walk over them to do his official part," she said.

When the village was set up, residents owned the title to their houses under the scheme known as "unit title tenure", which made people feel "reasonably secure", Ms Brieseman said.

Around that time, timeshare had got a bad rap for creating an illusion of ownership that was not there and, to get around that, the founders decided to go with the unit title scheme, Mr Hendry said.

There was huge risk involved in the development for the founders, it being a new industry. Putting money into something that had not really been done was a "huge call," he said.

"They took a punt based on faith to get it started and the residents took a leap of faith into something new.

"Now, people getting into retirement villages have an existing model to base themselves off and they know what sort of returns to expect ... back then they didn’t have that.

"The kind of pioneering attitude that was needed to start a village has gone now, because it is a well-established model and people know a lot more about it than they did then," he said.

According to Retirement Village Association figures, there were now 17 villages throughout Otago — amounting to 1000 units housing 1300 residents — and seven under development.

As the concept’s popularity grew, residents’ expectations had increased because it was a much more popular model, Mr Hendry said.

In 2007, the year Mr Hendry took over as chief executive, the Retirement Villages Act was passed which brought "huge change, not just for us but the whole industry," he said.

The Act brought in more compliance for an industry largely unchecked before then.

Under the Act, all villages must report to a statutory supervisor who provides an oversight of its operations.

When Chatsford undertook its last development in 2008, the village had to apply to the supervisor to ensure there were sufficient amenities to service the new homes, Mr Hendry said.

"If you add another 30 homes ... potentially you are adding an extra 50 residents, so they want to make sure that the core facilities can cope with that," he said.

It was a steep learning curve for the industry.

"To protect those coming into this environment, it put a layer of compliance, oversight and control over it."

It changed the way Chatsford operated. Units went from being sold under the unit title ownership to an "occupational right agreement" which was a life-time lease agreement.

As residents vacated, Chatsford bought back the title and issued the right to new occupiers, although there were still 40 units under the title ownership.

The age of people coming into the village has risen. The minimum age was 55 but Mr Hendry said that was now very unusual.

The village’s youngest resident was 61 and there were not that many moving in under 70, he said.

Is it? Gerontological cliches are not called for in business.