No keeping the bungy genie in the bottle 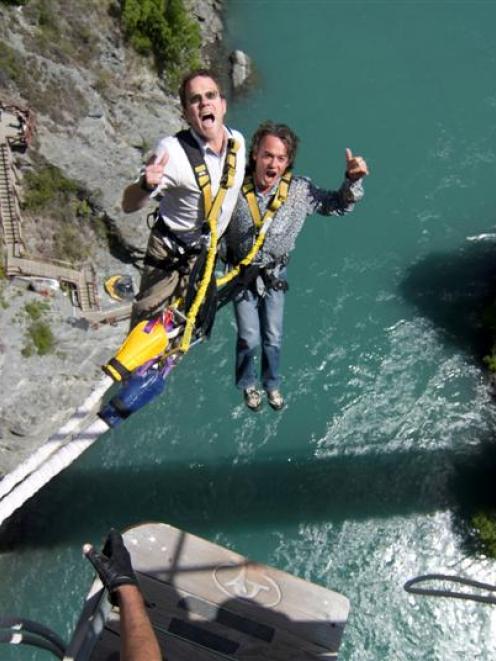 Henry van Asch and AJ Hackett tandem-jump off the Kawarau Bridge in 2008.
Commercial bungy jumping pioneer AJ Hackett initially had no intention of offering the experience to paying members of the public.

''I actually thought it was going to be too difficult managing people around a jump deck,'' Mr Hackett (55) said, recalling one of the first public days he ran for friends in France 18 months before launching in Queenstown.

''It just became anarchy very fast - people climbing all over the bloody bridge without harnesses on and all over our equipment. At the time I was thinking bungy would just be for special stunts for television or commercials.''

The man who famously bungy-jumped off France's Eiffel Tower in 1987 - resulting in a brief detention by police - noted in his 2006 autobiography Jump Start: ''Looking back now, I see that I was naive to think I could limit or control the commercial growth of this thing. Or that I could hold back people's desire to be the ones doing the jumping.''

Reservations about the public doing jumps aside, Mr Hackett - speaking before this coming Tuesday's 25th anniversary of the business - said he was always confident bungy was ''going to go off''.

And go off it has. Supplied customer numbers show more than three million people have paid to jump at AJ Hackett-branded sites since 1988.

That's when Mr Hackett and then-business partner Henry van Asch got clearance from the Department of Conservation to open at the historic Kawarau Bridge, on Queenstown's outskirts.

Twenty-eight customers paid $75 a pop for a jump on the first day.

Mr van Asch recalled Doc staffer the late Brian Ahern being appointed to '''deal with these bloody crazies', as they thought we were at the time''.

''Brian was a good outdoorsman and we were probably quite fortunate to have someone like him. He said 'I don't know anything about bungy but they're telling me what they've done and they're going to show us a live demonstration of what they can do with weights before they subject any human bodies to any risk'.''

The bridge was also in a state of disrepair and the bungy boys did a deal with Doc ensuring a share of revenue went towards restoration - business boomed and they ended up pumping $150,000 into it.

But it hasn't always gone smoothly for the bungy empire founded by two pals who met skiing in Wanaka and co-developed a safe, predictable bungy system.

Having expanded to France, Cairns and Bali, the pair split the business during bitter negotiations in 1997. 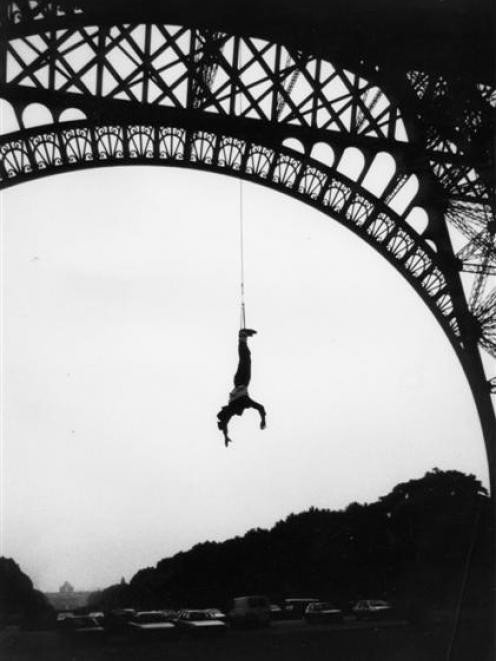 It took 11 years to heal the rift. In 2007, in a bid for consistency across sites and online marketing, Mr van Asch's Queenstown-based former chief executive, Michelle Trapski, brokered a deal for them to work together more closely.

''Our customers don't want to hear that AJ's story is different from Henry's,'' Miss Trapski told Mountain Scene at the time, adding a brand management partnership was hammered out so clients walking into any AJ Hackett sites knew they'd get ''a cold beer, a great coffee, friendly staff and an amazing experience''.

At the time Mr van Asch said: ''AJ and I can start to seriously enjoy each other's company - like we did in the first 10 years.''

At the time, Trojan and Mr Brinsley were behind competing plans for what would have been the highest bungy in Queenstown at 185m but those plans were shelved after their buy-in.

The highest Queenstown jump remains AJ Hackett Bungy's 134m Nevis Highwire, three times the height of the Kawarau jump with an 8sec freefall. That project in 1999 was overseen by Mr van Asch, whose company also runs a giant swing operation at the Nevis and earlier this year introduced a more sedate Zipride attraction at the Kawarau.

''We continue to set the benchmark,'' Mr van Asch said.

''We set the benchmark initially of safe adventure with high perceived risk - that was something new in 1988. And 25 years down the track, bungy has still maintained its aura of excitement.''

Neither he nor Mr Hackett are resting on their laurels.

Meanwhile, Mr Hackett, who arrived in Queenstown this week for the 25th anniversary (his flight was diverted to Invercargill so Mr van Asch chartered a chopper and personally went to pick him up), is busy overseeing new sites in Singapore and Sochi, Russia. Both are scheduled to open next year.

The man who years after his Eiffel Tower jump declared it ''one small step for man yet a bloody great leap for adventure tourism'' believes there's still plenty of life in the elastic bungy cord yet: ''Human beings by their very nature love a challenge and love skirting around risk. While our customers are getting off the end of the bungy cord smiling, we'll continue. The day they're not, we'll just stop.