No surplus this year - Treasury 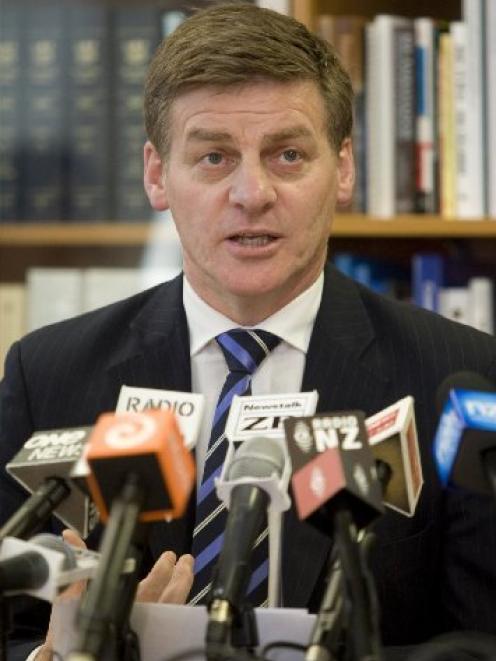 But Finance Minister Bill English was this morning still clinging to the hope Treasury is wrong and the Government's books will indeed be back in black this year as promised for the last three years.

At this morning's Half Year Economic and Fiscal Update, Acting Treasury Secretary Vicky Robertson said despite solid growth in the economy, the Crown's finances would take a hit from lower than previously forecast tax take.

That had seen Treasury change its forecast operating balance before gains and losses (Obegal) for the 2014-15 year from a slim surplus of $297 million to a deficit of $572 million.

Treasury said softer outlook for economic drivers of the tax such as lower dairy prices and interest rates had seen the expected tax take for the year fall by $600 million.


Treasury now expects the Obegal to return to a surplus of $565 million in 2015-16 despite the expected tax take that year now being $1 billion below previously forecast. However that surplus is achieved mostly by the decision to "rephase" or reduce operating allowances or increases in spending from the $1.5 billion a year set out in this year's Budget to $1 billion in Budget 2015 and 2016. The operating allowance would rise to $2.5 billion in the 2017 election year Budget.

Commenting on this morning's numbers, English said the Government "still believes an Obegal surplus is achievable this financial year" despite Treasury's forecasts.

"Although this latest Treasury forecast predicts a small deficit for the current year, we believe the strong underlying economy and responsible fiscal management can deliver a surplus when the final government accounts are published next October."

English said previous forecasts showed "the outlook can change significantly between the Half Year Update and the final accounts being published" and he pointed to the 2012-13 Obegal deficit which was $2.9 billion smaller than expected.

He said the projected deficit amounted to just 0.2 per cent of GDP.

"This is another forecast from Treasury that reflects a small difference between two very large numbers."

English said the Government would not change its spending plans to try and eke out a surplus this year.

"The Government has a track record of sticking to our spending plans to protect the most vulnerable and to provide certainty for users of public services... We won't be heading to slash and burn expenditure because one forecast shows us falling short of the surplus target."

Commenting on the rephasing of the operating allowances, English said they were still sufficiently large to consider "modest tax cuts and/or additional debt repayment in Budget 2017 as economic and fiscal conditions allow".

Separately, the Debt Management Office kept its domestic bond programme intact, while adding $7 billion of gross issuance in the 2018/19 year.

Green Party Co-leader Russel Norman said National had repeatedly staked its economic credibility on achieving a budget surplus this year, "but even that narrow goal is looking unachievable".

"How can people say Bill English is a good economic manager when his decisions are leading to led to seven consecutive deficits?"

Norman said that without National's "ill timed" 2010 tax cuts and GST increase "Bill English could have run a fiscally responsible Government restoring it to surplus this year".

"National have stretched their economic credibility to breaking. This is the same Finance Minister who promised further tax cuts in September - a few weeks before the election."

"Bill English's face is redder than the Crown accounts. This is the political test he set himself, and he has failed.

"John Key promised Kiwis a surplus, asking Kiwi families to knuckle down for years and trust the Government to get it right. New Zealanders have stuck to their side of the bargain. Treasury forecasts out today show National hasn't; with almost $1 billion wiped off the surplus since the May budget."

The decline had been so dramatic that even the 2015/16 surplus was in danger, Mr Robertson said.

"Predictably, before the election the government carefully contrived the May Budget forecast surplus of $372 million for the 2014/15 financial year, when in fact there's been almost a one billion dollar negative turndown.

"This specious accuracy was intended to convey an air of credibility to the Treasury forecasts and the impression that the government's books were in order.

"Now the back-peddling begins with the major surplus being dishonesty," said Mr Peters.