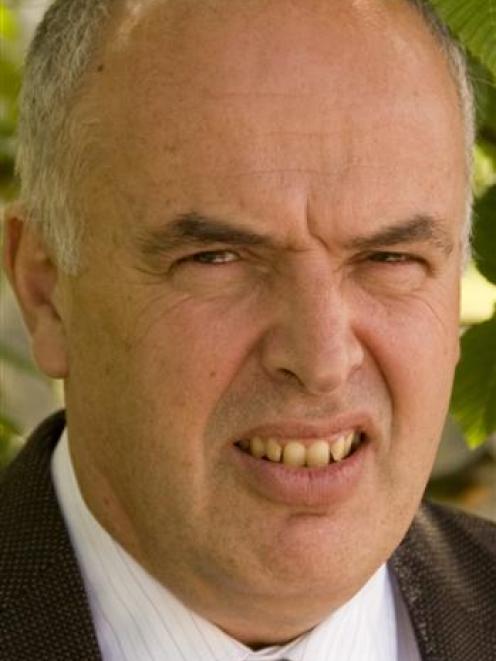 Kevin Snowdon.
Claims that the main ingredients for paint, plastics, industrial alcohol, fuel and even artificial sweetener can be produced from willow trees in a single process would seem to be the stuff of science fiction. But reporter Allison Rudd discovered a Taupo-based company which has perfected the technology with the help of a New Zealand research and development team.

The unique triple-processing wood digester technology developed by Auckland company Genesis Research and Development had been proven and Vertichem was set to build a pre-commercial trial processing plant in New Zealand. Then came the global credit crisis, and the company's plans were put on hold.

Now, Vertichem "was coming out of a valley of death", Mr Snowdon said, and a trial plant is on the agenda again, with construction expected next year.

It will not be built in New Zealand, but in North America, under the eye of Vertichem Technology's parent company, Vertichem, which is based in Toronto, Canada.

In this country, the digester has been successfully tested on chipped willow trees. The North American plant will use sawdust from a large sawmill.

Mr Snowdon said he was initially disappointed the $NZ100 million plant would not be built in this country, but he "had got over it".

"I am loyal to New Zealand and I would have liked to see it happening in this country. But the trial needs to happen. This technology has global potential."

The technology is a digester which produces three base chemicals from willow chips - lignin, xyglose and cellulose. Lignin is the base ingredient for a wide range of products such as resins, coatings, plastics, paints, foams and carbon.

Xylose can be further processed into an artificial sweetener for use in confectionery and food products.

Celulose can be processed into ethanol used for fuel, solvents and other products.

Almost all the tree can be processed, even the twigs and leaves.

Mr Snowdon said the process was a variation of Organisolv, the wood pulping process patented in the early 1970s. However, he was not aware of any other digester anywhere in the world able to produce three high-quality base chemicals from the same batch of wood chips.

For the processor, being able to produce the three base chemicals meant a higher sale price to a wider customer market, he said.

For example, lignin traditionally could be burnt for fuel and sold for about $1 a kg. But Vertichem expected its lignum would fetch twice that for no extra processing costs, he said.

"Fuels, foams, plastics, PVC, plumbing pipes, computers, shoes - one day, these could all be made from trees rather than from non-renewable petrochemicals. It is a new market but an exciting one."

The huge global potential of turning wood into chemicals has already been recognised by IEA Bioenergy, a collaboration of researchers and bioenergy organisations from more than 20 countries including the UK, Japan, US and New Zealand.

It has been researching technological advances and commercialisation of bio-based chemicals since 2007. A report released last year said that, from a technical viewpoint, almost all industrial materials made from fossil resources such as oil, coal and gas could be substituted by their bio-based counterparts.

However, while the cost of bio-based production in many cases still exceeded the cost of petrochemical production, biochemical and materials industry had reached a tipping point, the report said.

Production was "on the brink of a strong expansion", driven by high oil prices, the rapid development of more cost-effective technologies, consumer preference, corporate commitment and government mandates and support.

In this country, increasing biochemical and biofuel production from wood is one of the main goals of the New Zealand Forest and Wood Products Industry's 10-year strategic action plan released at the ForestWood conference in March.

At present, 70% of New Zealand's forest harvest is exported as logs or processed products. The major markets are Australia, North Asia, the US and China.

The strategy outlines a vision of expanding export earnings from wood in the next decade, from $2.5 billion last year to $12 billion by 2022, with the production of biofuels and biochemicals seen as an important part of adding value to the resource.

In the area of bio-based production, the strategy has targets of. - Increasing the production of biochemical by-products from wood to 20% of conventional pulp and paper product revenue by 2022 and increasing revenue for foresters by $400 million a year.

Increasing the use of bioenergy to produce heat and electricity in pulp and paper processing plants by 30% and reducing energy costs by $45 million a year.

Establishing one demonstration-scale liquid biofuel plant at an existing processing site by 2022.

"It is not a sensible or winning strategy to do nothing and just wait to make the best of what arises. Making forward-looking decisions on industry direction is more likely to give better long-term results for more participants."

A forester by profession, Mr Snowdon's association with Vertichem began when he trialled willows on 5ha of land near Lake Taupo. As well as being investigated for their bioenergy and biochemical potential, the trees were monitored to see how well they soaked up nitrogen from cow urine which was entering the lake from surrounding dairy farms and polluting the water.

The willows proved to be effective at nitrogen mitigation and grew strongly and rapidly, Mr Snowdon said. Grown closely together, at four years old they could be coppiced - cut off almost at ground level - using a mechanical harvester, and the tree would grow rapidly again. Willow plantations overseas could be coppiced seven or eight times before the trees needed replanting, he said.

Growing willows was a cost-effective option for New Zealand farmers, he said.

"Trees can be planted closely together and the cost of harvesting is about one-third that of a pine forest."

While a trial digester plant was not immediately on the horizon for New Zealand, Mr Snowdon said that could change "20 years hence".

There was already interest in his company's technology from forest and landowners, local authorities and iwi authorities.

Because plants were expensive to establish, Vertichem was keen to explore "partnering models" with investors, he said.

• US processor ADM has commissioned a plant producing propylene glycol from soybean and canola. Propylene gylcol is used in everything from medicines, cosmetics, toothpaste, hand sanitisers, shampoo, deodorant sticks and paintballs, and as a non-toxic antifreeze in cooling systems and solar hot water systems.

• Dow Chemical Company and OXP Biotechnologies are collaborating on an industrial-scale plant producing acrylic acid from corn or cane sugar. Acrylic acid is used in the manufacture of products such as plastics, coatings, adhesives, floor polishes and paints.

• Since 2009, Coca-Cola has used more than 10 billion bottles made partially from bio-based PET plastic. The company recently announced a partnership with three biotechnology companies to produce a bottle made entirely from plants.

• US chemical giant Braskem has built a commercial-scale plant producing polyethelene from sugar cane-derived ethanol. Polyethelene is the most common form of plastic, used to make everything from containers to toys. It can also be produced in foam form and is used mainly for packaging.