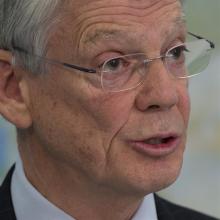 Graeme Wheeler.
As expected, the Reserve Bank cut the official cash rate to a record low 1.75% yesterday, with expectations the country’s stubbornly low 0.4% inflation rate will rise to the midpoint of its 1%-3% target.

The quarter point cut is not expected to be passed on in lower mortgage rates by banks, which are having to borrow money offshore at higher rates, partly because of the lack of deposits domestically. Reserve Bank governor Graeme Wheeler made no mention of the election of trade protectionist Donald Trump in the US this week, but economists are pinning Mr Wheeler’s comments about "uncertainties" to Mr Trump’s surprise election as president.

Globally, sharemarkets initially took a hammering on the US election day as support for Hillary Clinton started swinging towards the Trump camp, with markets shedding 2%-5% in billions of dollars of value, but most rebounded yesterday as investors considered Mr Trump’s likely business-friendly policies.

All the NZX50 index companies closed down on Wednesday, the index clocking up its largest percentage one-day decline in five years, down 3.34%.

However, the NZX took the lead of European and US bourses and rallied on opening yesterday while the ASX also rebounded and was on track to book its best session in five years yesterday.

Mr Wheeler said his current projections, including yesterday’s cut, would see economic growth strong enough to have inflation settle near the middle of the 1%-3% target range.

"Numerous uncertainties remain, particularly in respect of the international outlook, and policy may need to adjust accordingly."

Of concern for New Zealand would be the effect of the US placing tariffs on imports from China, New Zealand’s largest trading partner, which could push the shaky Chinese economy into contraction.

ASB chief economist Nick Tuffley noted there was no specific mention of Mr Trump’s victory by the  Reserve Bank but it "referred to uncertainties about the global outlook".

"Like many, the Reserve Bank will need time to actually see what happens and how that changes the New Zealand inflation outlook," Mr Tuffley said.

Mr Gordon said there was "one caveat", which Mr Wheeler may have inserted after the US election result, that the international outlook could prompt a policy adjustment in the future.

On the question of the OCR being cut, but not passed on to mortgage borrowers, BNZ external relations consultant Mac Dalton said it was timely to remind borrowers that interest rates were not solely linked to the OCR.

One source of funding for banks is local deposits, and at present there were more people wanting home loans than there were people saving, Mr Dalton said.

"So to encourage and attract more deposits, people’s savings and terms deposits, we need to pay a sharper return to savers," he said.

Also the banks still needed overseas funds to fill the gap, and the cost of those funds remained volatile, he said.

"It’s still important to remember that today’s interest rates for home loans are still some of the sharpest in decades and still a good time for people with home loans to look at ways to pay off their loans faster," Mr Dalton said.