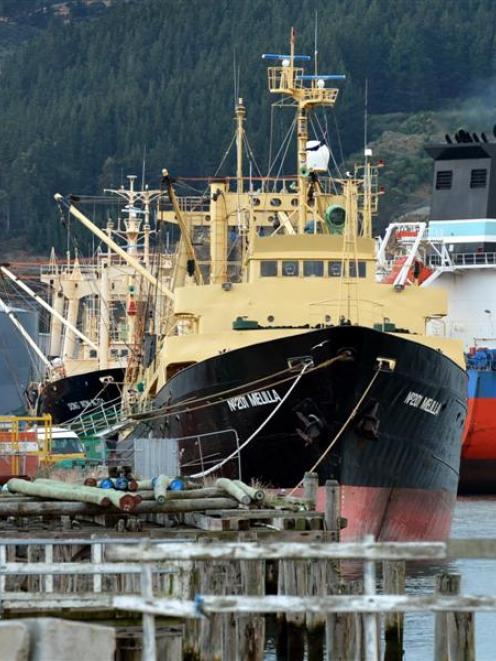 Officers of the Melilla 201 (foreground) are to face charges of illegal fishing. Photo by Stephen Jaquiery.
Officers aboard one of two Korean-owned deep-sea trawlers berthed in Dunedin are facing allegations of illegally dumping fish at sea, brought by the fisheries division of the Ministry for Primary Industries (MPI)The allegations stem from when the ships were on charter to a subsidiary company of Christchurch-based United Fisheries, UFL Charters Ltd, while fishing off the South Island for hoki and other species.

The Melilla 201 was seized by fishery officers on May 20 in Dunedin and the captain, chief officer and factory manager are to face charges following two fishing trips during 2011, in July-August and September-October.

This is the second time the sister ships, the 80m Melilla 201 and 68m Melilla 203, have been involved in allegations of illegal fishing, albeit with different owners.

MPI regional compliance manager form the South Island, John Slaughter, confirmed the allegations when contacted, saying the three officers had been charged with 10 offences under the Fisheries Act, including illegally discarding fish at sea, and for filing ''false or misleading'' catch returns.

A district court hearing in Christchurch is scheduled for July 1, when crew will give evidence, but a defended hearing date is yet to be set, Mr Slaughter said.

In late-2011 and 2012, both ships were embroiled in claims by their Indonesian crews over unpaid wages, and were held in Lyttelton's port under a High Court order.

The ships have been in Dunedin's upper harbour for almost three months, having completed their charter with United Fisheries, one of the country's larger fish exporters. Most of the crew have been discharged, since the vessels arrived in Dunedin.

Following local speculation one of the vessels had been arrested or impounded, United Fisheries chief executive Andre Kotzikas was contacted for clarification.

He said allegations of illegal fishing had been made against officers aboard the Melilla 201.

''I understand they have pleaded not guilty to the allegations,'' Mr Kotzikas said.

He declined to comment on the charges, or on how much a bond was likely to be for the deep-sea trawler.

''That [bond size] is what's under negotiation at present,'' he said.

Bond negotiations were continuing yesterday. Bonds are held in case charges are proven, where a vessel could be forfeited or fines imposed.

The Melilla trawlers are on the Korean Shipping Register and are owned by Taejin Fisheries, Pusan, South Korea.

In December 2007, both Melillas were seized while in Dunedin by the former Ministry of Fisheries, following allegations of illegal ling fishing in the Southern Ocean.

Bonds were paid before the vessels, which had been fishing in New Zealand for five years, were allowed back to sea and they also had to operate under ministry-set conditions.

In October 2008, in the Lower Hutt District Court, the captains of the Melilla 201 and Melilla 203, and a shore-based manager pleaded guilty and were convicted of illegal fishing, having caught fish in one area, but reported them as caught elsewhere.

About 745 tonnes of fish on both vessels were misreported from eight voyages in 2007. It was believed by the ministry to be one of the biggest area misreporting cases it had investigated.

The vessels were ordered forfeited to the Crown and fined $360,000 for illegal fishing. The owners had to pay a $300,000 redemption fee to get them back.

At the time the boats were fishing in New Zealand under charter to Tauranga-based Trans Pacific Fishing Ltd and were owned by Dae Hyun Agriculture and Fisheries Co Ltd, of Korea. Both companies went into liquidation and the ships were sold.

In November 2004, a fisherman on the Melilla 201 was lost overboard in the Southern Ocean, and not found.