Second- and third-generation plantsmen Denis (left) and Chris Hughes at the family business Blue Mountain Nurseries in Tapanui; Denis with his son Chris and daughter-in-law Rebecca Hughes, and granddaughter Olivia; the City of Dunedin rhododendron which was bred by Denis’ late wife Margaret and used to commemorate Dunedin’s 150th anniversary; the team at Blue Mountain Nurseries. PHOTOS: SALLY RAE/BLUE MOUNTAIN NURSERIES/CRAIG BAXTER
A West Otago business celebrates its 90th anniversary this month, an extraordinary achievement particularly given it has remained in the same family. Business editor Sally Rae meets the Hughes family from Blue Mountain Nurseries.

Business has bloomed for the Hughes family for the past nine decades.

Three generations — internationally recognised for their green fingers — have produced plants from the same spot in a quiet Tapanui street, albeit over an expanding footprint.

Their tagline "a passion for plants since 1932" is a phrase which is used regularly in conversations, an apt summation of those involved both past and present.

While proud of their history, reflecting on the past is something that general manager — and third-generation plantsman — Chris Hughes does not focus on.

For it was by changing that he attributed the family’s longevity in the nursery industry.

"Every year is different , you must change, you can’t stay the same.

"You’re ... only as good as the last thing you did, you can’t just rely on history. To be honest, I’m not a big looking-back person, I’d rather look forward," he said this week.

Blue Mountain Nurseries celebrates its 90th anniversary this month; it was founded in 1932 by Chris’ grandfather Stanley (Stan) Hughes who emigrated to New Zealand in 1924 after attending agricultural college in England.

Tired of living under canvas at Beaumont during the Depression years, he decided to start a nursery. Like any business, he needed cashflow and he started producing vegetables for local consumption.

That provided a quicker income than waiting for trees to grow, but his first love was ornamental plants, including bulbs, perennials, alpines and trees and shrubs.

He built up the business with the support of his wife Elizabeth, and their three children — John, Denis and Judith — all helped during their teenage years and beyond.

A keen collector and plantsman, Stan was known throughout New Zealand for the rare and unusual, as well as his skill as a plant breeder.

He was a member of many national and international horticultural societies as well as a fellow and a life member of the Royal Horticultural Society Great Britain. He bred and introduced many plants, many of which are still available today.

Cut flowers were first produced at the nursery in the 1930s and sold to auction markets and florists. Floral work was an important part of the business; a local funeral could require up to 60 wreaths and sprays.

The nursery became a larger family business with John and wife Irma, and Denis and wife Margaret each developing their own interests and expanding the business from 1966.

Blue Mountain Gardens streamlined the production of bulbs and cut flowers by mechanising production making for a highly competitive production unit. The bulb harvester could lift 10tonnes of bulbs a day.

Tulips, daffodils and iris were picked from the field from September to February and tulips were conditioned in cool stores during summer and forced during winter months in greenhouses to provide cut flowers out of season for the domestic market.

At its peak in the 1990s, 400 cartons of cut flowers a week were dispatched. John and Irma retired in 2004 and that business closed.

Blue Mountain Nurseries has continued to flourish; it produces more than 3000 varieties of plants for national distribution to other nurseries, parks, landscapers, garden centres and gardeners throughout the country.

While it has a retail garden centre on-site — an important "window" for the business — about 95% of the plants produced are destined for national sale. It is not unusual to have 300 invoices going out in a month.

It specialises in the propagation and growing on of hardy trees and shrubs, rhododendrons, azaleas, conifers, climbers, natives, perennials and pleione orchids.

At 80 years old, that passion for plants still drives Denis Hughes, who lives next to the nursery and can be found on site every day.

A celebrated plant breeder, his continued enthusiasm for his plant breeding programmes is evident in his almost boyish glee as he outlines his latest projects.

A hefty list of plants were the result of those programmes, he said. A range of deciduous azaleas, dubbed the Blue Mountain Azaleas, and Agapanthus Blue Mountain, were some of the latest additions.

Rhododendrons were a particular passion for both Denis and his late wife; Denis produced the first plants of Rhododendron Crest in New Zealand, and Margaret bred City of Dunedin, the feature plant for Dunedin’s 150th anniversary.

Margaret used to do most of the paper and telephone work while he was out the back playing with his beloved plants — something that he was still doing.

When it was suggested he must have a lot of patience, he laughed and said he had none. "I want them yesterday," he said.

One of Denis’ current breeding programmes is the perennial Francoa, which has a flower stem which usually comes in a light pink.

He has been trying to breed whites and deeper colours, while Chris keeps telling his father he needs to breed a blue one.

Father and son share a cup of coffee together most mornings and Chris Hughes said he was grateful to have his father’s extensive knowledge on hand. 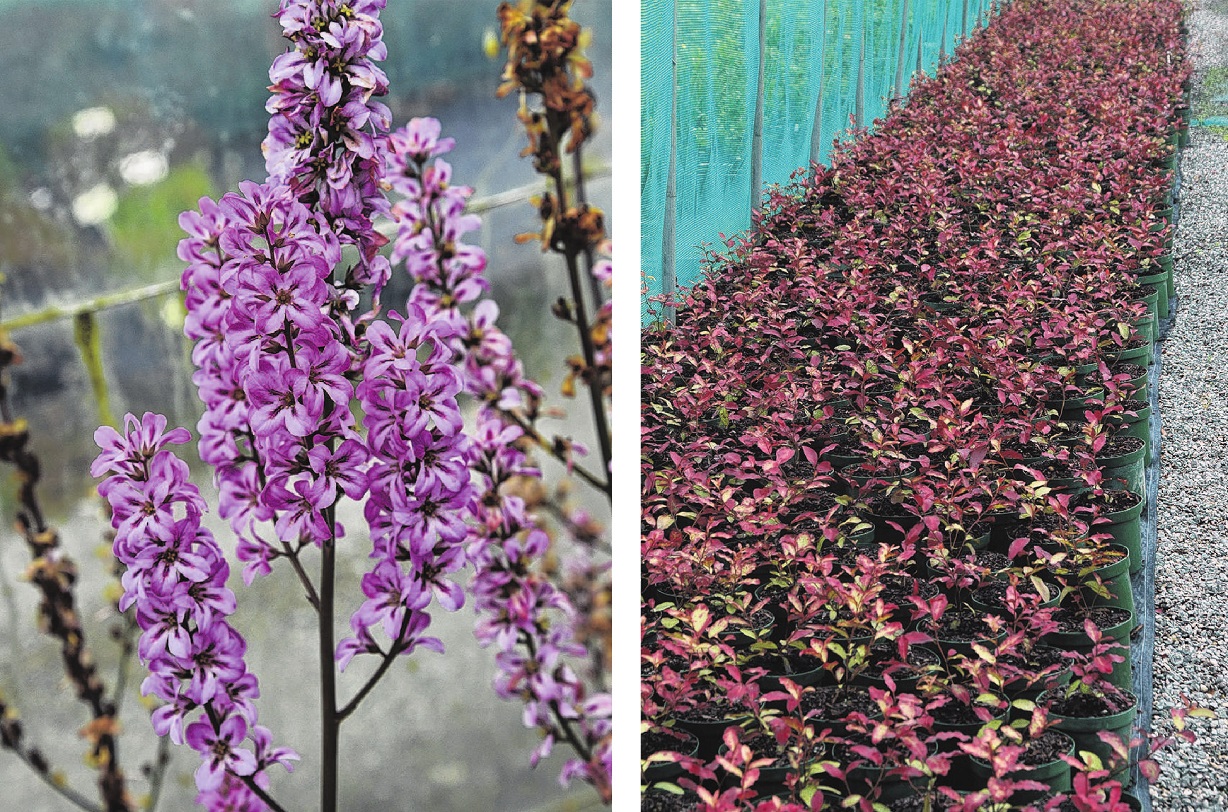 Dancing Flamingo (left) is from one of Denis Hughes’ breeding programmes; New Zealand native pepper tree Pseudowintera "Red Leopard". PHOTOS: BLUE MOUNTAIN NURSERIES
Chris acknowledged it was "almost unusual" for a family to be able to work together, particularly in such close range.

Ask who is the boss and there is some good-natured banter — resident cat Maisie even gets a mention — although it is conceded that Chris is in charge.

Ask Denis is he is proud of what the third generation of Hugheses has achieved and his face lights up.

"Oh yes, it’s wonderful what they are doing together."

Chris’ wife Rebecca, who looks after marketing, social media and processes retail orders, said she felt "very blessed" to be involved in the business.

Originally from Christchurch, she has an honours degree in botany — not that she ever thought she would use it.

She was working for industry training organisations in Christchurch and met her future husband at a leaving function for the horticulture ITO chief executive — Chris was on the board of it. It took three months for him to phone her afterwards but love blossomed.

Rebecca, who had never previously been to Tapanui, did have a slight problem: she could not initially move down after they married because she needed broadband for her work, something the West Otago town did not have.

Telecom had a campaign on its website where people could suggest where broadband was needed — Rebecca admitted to repeatedly tapping Tapanui in. The town eventually got broadband, and she moved south. She did quip that some of Chris’ friends doubted that he had even got married.

Growing up, Chris always enjoyed the nursery and the plants — Denis recalled him driving a tractor in the nursery when he was about 7 — although Chris stressed his parents never forced their children into horticulture and both his sisters chose other careers.

He completed a commerce degree, in horticulture, at Lincoln University and then did his master’s, before deciding it was time to do a real job — "so I thought that I better come home".

Since Covid-19 arrived, there had been growth in the business in two aspects: retail customers through online orders, as people were embracing gardening and "having lots of fun", and the increase in riparian plantings.

Growing native plants was now a big part of the nursery’s business and the work being done in that space, including on farms, was something Chris said he found particularly exciting.

Asked what trends were popular in the industry at the moment, he said natives were one, while there was also another segment of customers who wanted colour.

Perennials were having a resurgence while rhododendrons — which Blue Mountain was most famed for — were not as fashionable, he said.

Their biggest plot this year was the native Carex Secta for riparian work. Just like traceability in livestock, every plant on the property had a crop number which could be found on their database tracking system, which included the origins of the seed.

Asked about his favourite plant, Denis quipped it depended which day he was asked. It could even be a weed with an interesting variegated leaf.

The way of growing plants had changed considerably over the years as more technology evolved, making it more efficient and less labour intensive.

There was a team of about 20 staff at the nursery and Chris admitted he was "a bit picky" when it came to hiring. Candidates needed to fit the culture of the business.

Workplace training was important and some staff were training on the job towards a national certificate of horticulture in nursery production.

The next step was to redevelop the middle of the nursery, and there were plans to install a large high-tech and environmentally friendly greenhouse with a biomass-fuelled heating system.

The nursery was also bringing back the bulb part of the business, having still retained some of the bulb equipment, although Chris said he was unsure, at this stage, how big that would develop into.

The Hughes family enjoyed living in the supportive West Otago community; running a business in a rural community did come at a cost — particularly freight, both in and out — but there were also pluses.

Being part of a small community was "good fun", Chris said, and they were grateful for the community’s support.

They enjoyed sharing their knowledge and nursery with others, although they had encountered several interesting incidents.

They once received a complaint after a busload of nursery-goers complained that the toilet paper in the toilet had run out — something which confused them, as they always restocked it.

Turned out they had run out of toilet paper to wrap the cuttings that they had snipped as they wandered around.

Stan Hughes also told the story of a woman who showed him a daffodil flower head and asked if she could get it. She was told "it’ll be another year now", given she had plucked the only flower of that particular variety.

The fourth generation — Chris and Rebecca’s daughter Olivia (17) — is at home at the moment, having spent the past 10 months living in the United States where she has been attending a figure skating school of excellence. She was returning to the US this month as she continued to pursue her dream of travelling the world skating.

As to whether she would ever be interested in the nursery, her father said "who knows?".

"You don’t do things on the assumption the next generation will come along and do something with it. Mum and Dad certainly didn’t. It’s important every generation does that," he said.