Pitfalls lie ahead for NZ mining

Oceana Gold’s Waihi mine on the edge of Waihi township. Photo: Supplied
Government proposals which could dramatically alter how mining is done in New Zealand cast a pall of gloom over the annual New Zealand branch conference of the Australian Institute of Mining and Metallurgy (AusIMM) in Tauranga this week. Simon Hartley attended the conference, and reports back on the state of the sector.

New Zealand's mining sector is facing its toughest battle ever as the Government winds its way toward reviewing the Crown Minerals Act, which governs the permitting of land for mining.

Crucial to the review is Prime Minister Jacinda Ardern having said "no new mines on conservation land" last year, which was much reported as this generation’s "no nuclear" moment.

The lack of details on this stance has the mining sector in a tailspin, given a third of the country is covered by one of five types of conservation land.

Conversely, it has been estimated just 0.08% of all Department of Conservation land has mining permits covering or overlapping it.

Environmentalists will be clamouring for the Coalition Government to make the most of this one-off opportunity, to radically change the face and future of mining forever.

At present the review is expected to be opened to public consultation next month. 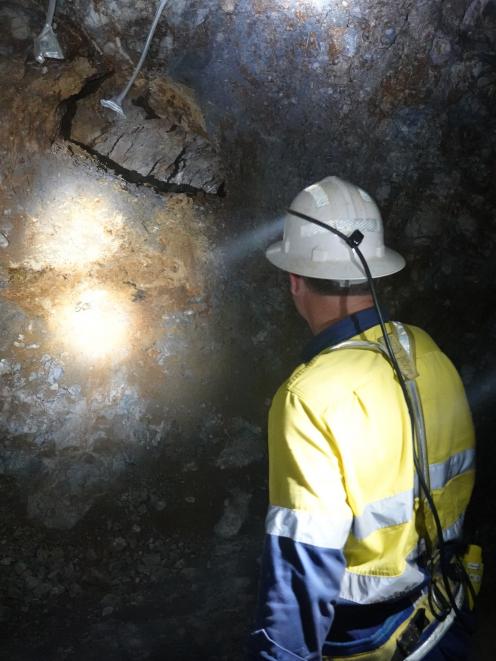 Oceana Gold’s underground Correnso mine at Waihi in the Coromandel. Pictured, an intercept with old workings. Photo: Supplied
The closing period is expected to be either in late-December, or as the mining sector hopes, in February, with a decision possibly within four to six months after that.

The Government has already imposed, without consultation, sweeping changes to the separate oil and gas sector. It announced in April no new offshore blocks would be put up for permit application, and restricted any onshore permits to Taranaki only.

In order to sidestep any legal challenges by judicial review, no oil and gas company with existing permits will have any changes made to their permits.

The fact the mining sector will be consulted — where oil and gas was not — is the only silver lining to the gathering clouds, although it barely counts as a win.

Another dimension in this equation has to be considered: what pressure can the Green Party bring to bear to achieve sweeping changes to appease its supporters?

Ironically, the National Party did little to assist the mining sector during its last nine years in power, other than pumping more than $12 million into country-wide aeromagnetic research and its instigation of "annual block offers" for international oil and gas companies to tender for new onshore and offshore exploration sites.

Regardless of political persuasion, mining has always been the poor cousin to the oil and gas sector — the latter’s investment, jobs, export receipts and ultimately tax and royalties overshadows mining’s annual $2.6 billion contribution and 4300 direct jobs, each of which,  on average, earns $105,000.

The mining sector is massively frustrated its message of the necessity for mineral exploration and its rewards from contributing to the economy, manufacturing and technological advances appears to fly under the public’s radar.

The public seem to have become immune to hearing of the gravel, steel and aluminium needed to build a wind turbine or the hundreds of minerals required to make a cell phone.

The mining fraternity and environmentalists remain poles apart, and it is unlikely they could sit in an auditorium together and publicly debate the issues.

Australian-based AusIMM president Colin Moorehead told delegates the message of the importance of mining in New Zealand had to be recognised.

The industry needed to put itself forward as the "trusted voice", made up of scientists, geologists and engineers.

"[We’ve] now come to a critical juncture and are facing significant headwinds," Mr Moorehead said of the potential for banning mining on conservation land.

"We don’t want to see a mining ban being driven solely by ideology," Mr Moorehead said.

The timing for the mining sector could not be worse, after the second attempt by Trans-Tasman Resources to mine ironsands off Taranaki’s coast was rejected by a recent High Court decision.

More than 13,000 submissions were made against its marine consent by iwi, fishing companies, environmentalists and communities, although many were pro-forma submissions.

The Environmental Protection Authority said this week that in general, pro-forma submissions were not held in high regard, whether they supported or opposed any particular application.

Why the seabed issue could still work against the mining sector though is that communities have again found a way to voice their opinions and seemingly be heard.

It was a rallying call not really seen since the contentious and at times bitter Save Lake Manapouri and Save Aramaona protests — movements against hydropower and an aluminium smelter near Dunedin, respectively.

Several mining companies highlighted their respective operations are all in acknowledged "historic" areas, including the Denniston plateau above Westport, and the Karangahake gorge, near Waihi in Coromandel.

Chief operating officer Wayne Chowles, of New Talisman Gold, whose Karangahake mine was targeted by protesters this week, was upbeat in getting some production — albeit small — under way by October.

More feasibility studies were under way, looking for high grade targets and a small pilot plant was due for delivery soon, to process 90kg of ore per hour.

He, too, made a point of highlighting the mine’s long history. In its entirety, it has 35km of tunnels spread over about 15 levels, of which Talisman is developing only a small part.

Protesters interrupted all three field trips to gold and coal mines in the district, beyond Tauranga, but did not show at the conference centre. Proposed seabed mining also has a more emotional component than mining ashore, with many great unknowns as to the possible risks, environmental effects and mitigations — all of which would be precedent-setting if given the green light at this stage.

In setting the scene of the complexity of mining, offshore phosphate deposits on the seabed are a prime example.

The case in point is the import of Moroccan phosphate fertiliser, which underpins farming sector growth, but contains high levels of cadmium, a toxic metal and known carcinogen.

The New Zealand alternative has a much reduced cadmium percentage, but proposals by Chatham Rock Phosphate to suction-dredge it from depths of around 400m are also a first — more unknowns to counter.

Like Trans-Tasman, Chatham has had its first marine consent application declined, and it is expected to have lodged a second tilt by the end of the year.

The companies between them have spent well in excess of $100 million on the application process.

The proliferation of phosphate use in New Zealand’s agriculture brings its own, separate, environmental dimension to the argument.

One of the country’s most senior exploration managers said the "no more new mines" issue may well be the time the country finally had to "take a good hard look at its moral obligations", through the forthcoming submission period.

He asked if New Zealand, for environmental reasons, should exit mineral extraction and then rely on costly imports to make its steel and other minerals to fuel its technology and manufacturing needs.

Replacing local resources from possibly Third World or developing countries, where environmental considerations are often of little consequence, would not be environmentally friendly, nor assist climate change, he said.

The stance of many miners is that extraction in New Zealand is better overseen first hand, within the existing safeguards of the Resource Management Act and Crown Minerals Act, as they now stand.

On the basis of the oil and gas changes, there are 701 existing types of mining permits in play around the country at present.

The Government would probably not want those challenged judicially either, although the majority are held by small local businesses — not the deep-pocketed oil giants.

Whatever the Government throws out for consultation in coming weeks, it is highly likely to be a watershed moment for mining in New Zealand, and possibly environmentalists.

Well thought-out submissions either for or against any proposed changes would be an invaluable snapshot of public opinion.