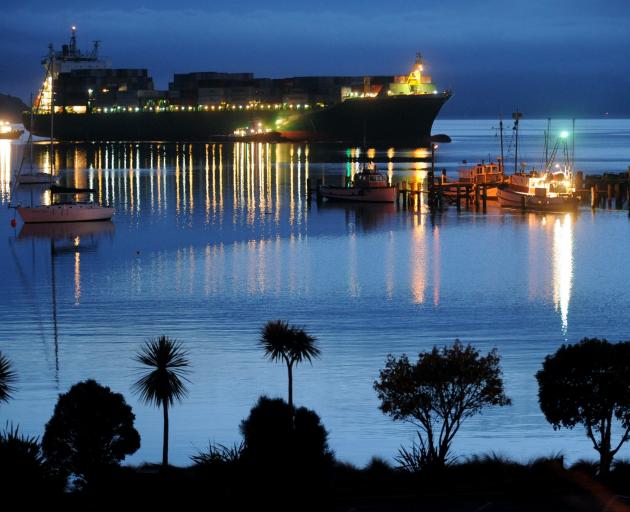 Otago and Southland log exporters have benefited hugely from the high prices fetched during much of the past two years; pictured, heavy machinery makes light work of processing logs on a property near Outram, south of Dunedin. Photo: Stephen Jaquiery
Trawling through the past year’s stories and economic data,  Simon Hartley reviews Otago’s economy with Kevin Winders and Dougal McGowan, the chief executives of Port Otago and the Otago Chamber of Commerce, respectively.

The economies of Otago and Southland have chalked up stellar growth during the past calendar year, including some export records set by Port Otago and South Port at Port Chalmers and Bluff, respectively.

Time and again during the year, the southern provinces notched up pole positions in national rankings with economists, while separate measures of the manufacturing and service sectors also often had them leading the country’s four regions.

For differing reasons, both economies have seen surges in population growth. That has brought the need for new housing and infrastructure construction, which is at least initially self-perpetuating, with new jobs, increasing home building and sales and increased retail spending.

Dunedin’s population bounded ahead by 1900 people to hit 130,700 — which averages out at more than five people arriving every day.

Some of the southern success can arguably be put down to cooling in northern provinces and cities, such as Christchurch’s rebuild wind-down and Auckland’s easing house prices and economy.

While the cooling effect makes the southern provinces look better on paper, Otago and Southland’s gains have real merit — be it record tourism numbers and guest nights around Queenstown and Central Otago, record log exports or strong, or steady, lamb and dairy prices during much of the year.

The container ship Euro Max eases its way past Carey’s Bay towards its berth at Port Chalmers. Photo: Stephen Jaquiery
Otago booked stellar pre-Christmas spending gains, up 7.1%, the second highest in the country, while Boxing Day retail spending hit 11.1%, matching the national increase for the day.

Cadbury’s closure and the loss of 360 jobs was the most bitter pill of the year for Dunedin.

It was a slap in the face to see a highly profitable, innovative and long-standing employer dismantled and shipped overseas, all for the greater good of Mondelez’s bulging multi-billion-dollar balance sheet.

Another unwelcome business closure was revealed in mid-December: 40 staff were to be laid off from Dunedin engineering company Milmeq.

As well as having an empty order book,  due to increasing global competition, other divisions of the company were sold to new Australian and New Zealand owners, prompting the split.

However, if there is any silver lining, at least the Cadbury site will not become a run-down eyesore awaiting redevelopment, as the site will be the cornerstone foundation for the $1.2 billion rebuild of Dunedin hospital.

Building a hospital is arguably in the "high degree of difficulty" range.

The need for multiple layers of services throughout sprawling buildings poses some of the most complex and technical requirements, from both architectural and construction arenas. 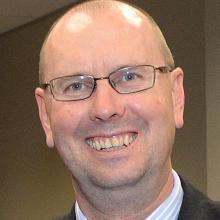 Dougal McGowan
Keep an eye out for hospital budget top-ups in the years ahead.

The rebuild is already being predicted to encompass up to 1200 jobs at times, including estimates of 600-800 on-site workers, who will also need accommodation.

Mataura Valley Milk’s $240 million investment in Southland has come to fruition.  Its plant opened mid-year with 70 jobs already in place and more are being advertised.

Construction in Dunedin, Queenstown and Invercargill is highly likely to underpin further growth in those places.

Fonterra’s corporate performance during the past two years has left it laden with debt and posting a maiden annual loss of $196 million and shaky overseas joint ventures.

A Chinese investment had to be written down by $405 million, and a $183 million compensation payment was made to a French company.

While its ongoing advice to its dairy farmers is to be prepared, recent farm-gate milk price downgrades are of rising concern, although  they should still be well above the breakeven mark for the majority of farmers, for the time being.

Otago Chamber of Commerce chief executive Dougal McGowan said Otago and Southland’s primary sector had  been "strong across the board" in 2018, and at times was assisted by the fluctuating New Zealand dollar.

"The last two to three years is the strongest Otago’s economy has been in a long time, with both stability and growth," he said.

While highlighting the ongoing strength of the primary sector, Mr McGowan said diversification in technology, tourism and business start-ups had also been important.

"The other good addition to growth has been increased population," he said.

"I believe it’s tracking along nicely, good [export] volumes, and in town there’s good feedback from the likes of panelbeaters and mechanics," he said.

While the port had a slow start to the export season, because exporters had cleared their respective supply lines, things had since picked up going into December, Mr Winders said.

Container volumes were "slightly ahead" on a year ago, but much of that was the ship-to-ship "trans-shipment" of full containers, coming from vessels which had visited Timaru. 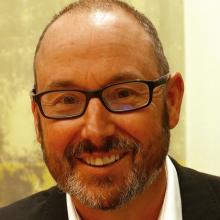 Kevin Winders
Most of those containers — with exports mainly from Fonterra, Silver Fern Farms and Alliance — were bound for Southeast Asia on a Maersk shipping route which began in November.

"The new season’s exports are starting to gear up," he said.

Last year set a record for logs across Port Chalmers’ wharves, and if demand continued in the second-half trading, Mr Winders said that record could be matched or possibly beaten.

However, he cautioned that export of processed timber was under a cloud, because of China’s tariff wars with the United States and because China had reinvested in its own sawmilling sector, so was processing more New Zealand logs itself.

A "milestone" for Port Otago during the year was the scheduled arrival of a record 117 cruise ships, of which there had only been one cancellation so far.

South Port in Bluff booked record cargo-handling and growth in bulk cargo which underpinned a 14% boost to its after-tax profit of  $9.66 million, for the year to June.

There was a 13% increase in cargo flows through Bluff during the period, total volumes rose to a record 3,445,000 tonnes, due to strong growth in bulk cargo, which makes up 85% in total.

Cargoes of logs and woodchips reached 1 million tonnes for the first time.

On the outlook for the Otago economy in 2019, Mr Winders expected continued "strong" export volumes, while the city was preparing to benefit from further university construction and the new-build hospital.

He noted there was plenty of "positioning" under way for the large Dunedin hospital rebuild, and more interest in commercial and industrial property.

Port Otago’s subsidiary Chalmers Properties has a large portfolio of industrial land in the city.

When asked, Mr Winders confirmed there had been increased interest from would-be land purchasers of freehold properties, which was being dealt with on a case-by-case basis, he said. Growth and performance in the coming year for the southern provinces is predicted to continue, but come 2020 a nationwide cooling of the economy is expected, largely from slowing population growth.

Housing around Otago remains strong, with often double-digit year-on-year gains in both median prices and house values; while Auckland and Canterbury’s housing prices continue to wane after rampant gains.

Otago can expect to see gains continue, but a closer look at quarter-against-quarter gains shows signs of an easing in price growth.

And no economic commentary can be complete, as we head towards the end of the second decade of the 21st century, without a disclaimer that the US-China trade relations, and their ongoing tariff wars ,will continue to overshadow all predictions.

Mr McGowan believed the "stormy weather" for 2019 lay in global trade, given Brexit and the US-China trade tariffs.

"There’s  a lot of risk out there at the moment ... with more dictatorial-type leaders around the world," he said.

On Sunday the trade agreements with Japan, Canada and Mexico from the Comprehensive and Progressive Agreement for Trans Pacific Partnership took effect.

Once fully in force, with other countries aboard, it has been estimated there will be a possible $222 million of annual tariff savings.

Mr McGowan said the complexities of the present trade wars could affect the top tier of New Zealand’s trading partners, from China and Australia, the US and also the United Kingdom.

"We need a close watch on that [Brexit] but at least we have diversified to exporting to the rest of Europe," he said.

Otago and Southland’s 2019 outlook was "still in a strong place", and Mr McGowan was "in general" confident of another strong year ahead.

However, he had one caution: that the small to medium-sized business enterprises, which made up more than 80% of New Zealand businesses, had a tough year ahead.

There were pending changes to labour laws, increasing wage bills and, in many sectors, labour shortages —  now a more than two-year-old issue in Otago and Southland.

"All of these issues come at a cost, and will hit those small to medium enterprises hard," he said.