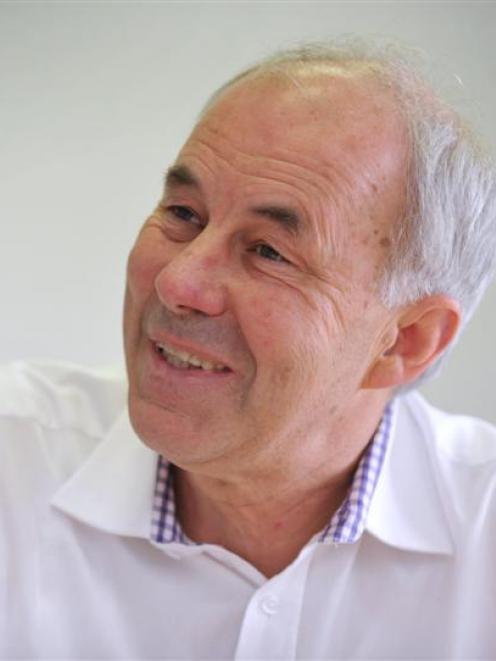 Murray Tilyard. Photo by Gerard O'Brien.
From a top-floor corner office looking straight up Dunedin's George St, Murray Tilyard is overseeing a medical group that is quietly changing the way health services are delivered to thousands of New Zealanders. That number is set to grow exponentially. Business editor Dene Mackenzie caught up with Professor Tilyard this week.

Murray Tilyard (59) has been thinking about health practically all his life.

The Helensburgh general practitioner is also the Dunedin School of Medicine Professor of General Practice and now the chief executive, or executive director, of a group of health entities revolutionising the delivery of some health services.

The eReferral system was developed in Dunedin by one of the companies associated with Southlink Health, the group started and now overseen by Prof Tilyard.

All surpluses are ploughed back into development and education, after overhead costs are met.

The group employs 76 people in Dunedin, a further 22 in Otago, another 36 throughout the rest of the South Island and has an annual turnover in excess of $25 million.

Prof Tilyard expects the turnover to have increased a further $8 million by the end of the year and to increase by a further $15 million to $20 million in the 2013 calendar year.

"We do this through cutting-edge health IT technology, education and knowing and managing the health businesses all as not-for-profit entities."

Prof Tilyard acknowledged the group had been largely off the radar for several years.

"I suppose that this has suited us in the past. But we have a great team, dedicated to their work and I think they need to be acknowledged."

One of the more startling facts offered by Prof Tilyard was that a million New Zealand patients were benefiting from the health IT tools developed by the group.

BPAC Inc had developed software that provided artificial intelligence, allowing the computer to be a "mini specialist" for GPs, he said.

Given that it was sometimes difficult to get time with a specialist, a GP could look at a patient's problems and consult with the program about treatment.

The program was available across 94% of New Zealand and the fact it was helping a million patients would be acknowledged publicly on June 6 with a planned visit to Dunedin by Health Minister Tony Ryall.

In July, national recognition would be given in Wellington.

He described the model as GPs having a "cupboard of specialists" at their disposal, ones they could call on at a moment's notice.

Not content with just providing the intelligence, the group was also now developing the online New Zealand Formulary which has Southlink Health, the University of Otago, the Royal Pharmaceutical Society of Great Britain and the British Medical Journal among its partners.

BPAC Inc and BPACnz had been developing the formulary - a prescription Bible - from scratch after receiving government funding in 2008.

Realising that changes to the medicines Pharmac would pay for were being made on a regular basis, Prof Tilyard and his staff set about developing the formulary with some specific goals in mind. It had to be web-based, in an eBook form and able to be fully integrated into third-party software. The program was updated daily to give current information to subscribers.

One of the group's activities more widely known, particularly in the South, was its purchasing of medical practices and implementing business models refined by Southlink staff.

To see the driving force behind that project, the earlier activities of Prof Tilyard need to be reviewed.

As far back as 1991 when Simon Upton was health minister, Prof Tilyard was involved in Crown Health Organisations, or CHEs as they were widely called.

Prof Tilyard recalled sitting in a Wellington meeting when everyone was talking about "CHEs" and he needed to get up and ask what a CHE was.

It turned out the then National government was changing health funding and general practices were in the frontline of the funding application process.

Independent practice organisations (IPOs) were set up to manage GPs through that "minefield" and Healthlink Dunedin was formed by Prof Tilyard to become an IPO.

One of the questions that needed to be answered was whether GPs could manage if they were given a budget for pharmaceuticals and laboratory tests.

A pilot programme determined that GPs could manage and Healthlink Dunedin evolved into Healthlink South, overseeing 210 practices covering 1500 health providers and covering all of the South Island, with the exclusion of Pegasus in Christchurch.

Eventually - as Regional Health Authorities evolved into Health Funding Agencies, followed by Primary Health Organisations - Southlink found itself with a contract for just 12 months to see the PHOs go out on their own.

"We had a contract for the first 12 months to get them to grow and let them go. As they grew, like children, they could turn on their parents when they wanted the best deal. We went through some lean times but came out the other side."

Later, Southlink received a call from a GP asking the group to buy his practice and Prof Tilyard sensed a business opportunity.

He carried out research and found that young New Zealand professionals were becoming increasingly adverse to ownership, in a business sense.

A law firm acting for Southlink told the group it had trouble appointing partners because the young people, already earning substantial incomes and with the ability to remain mobile while enjoying a quality of life, were reluctant to take on extra duties and responsibilities for more money.

That was proving true for the medical professionals where GPs across all ages were becoming less interested in owning their practices.

Southlink Health Services decided to send out letters to 200 practices to see if anyone was interested in selling. They were offered a deal with Southlink taking a 50% equity stake or a 100% equity stake.

At 50%, the GP had a salary and a share of the profits. With a 100% stake, Southlink took over the running of the practice and paid the GP a salary based on experience and expertise.

"We thought we might get one or two replies but we got 97 responses from those 200 letters. Sure, some were just kicking the tyres, but out of those responses we now own 10 practices and will own another 10 by the end of the year," Prof Tilyard said.

Southlink Services expected to double that to owning 40 practices by the end of next year and was aiming to service a population of about 400,000 patients, eventually.

The model was similar to the Group Health Trust in the United States, he said.

As part of the model, Southlink undertook to increase services to and the education of GPs.

The group was ready to start building three new purpose-built practices in Green Island, Invercargill and Picton. The group did not want to own the properties and was working with its developer Calder Stewart.

The model for the premises was the Cromwell Medical Centre, he said.

"To attract colleagues you need modern premises and collegiality. We need to have flexible working hours to cater for the feminisation of the medical profession. We address all of those issues."

In Invercargill, the group had bought five practices and would combine them into one new premises in the Don St area. All of the practices were from the same area and Prof Tilyard did not expect any reluctance by patients to shift to the new building.

Asked about how the group funded the purchases, Prof Tilyard said surpluses had been built up by Southlink over the years. The money had been placed in a trust and when legal advice indicated that purchasing the practices, and combining it with the goals of education and providing care into the community, met the trust deed, the decision was made to proceed.

One of the major issues the group had to consider was how to run the recently purchased practices profitably. It decided not to follow the Australian model where consultations were reduced from 15 minutes to 10 minutes as a way of generating more income.

Prof Tilyard saw a time when the group-owned practices would extend the consultation times out to 20 minutes to cater for the ageing population and the complexity of modern health issues.

Locality managers were appointed to run five to eight practices and other executives oversaw the financial reporting so that monthly cash flows could be monitored.

Some of the downsides for Prof Tilyard included learning what ebit (earnings before interest and tax) meant on a balance sheet and having to report to six different entities as either chief executive or executive director. When it was suggested by the Otago Daily Times that ebit was the first step and that perhaps he should move up the balance sheet to ebitdaf (earnings before interest, tax, depreciation, amortisation and financial instruments), he immediately called for the finance director.

An admission (within hearing of the IT manager) that he liked to read in the bath brought a look of horror to the IT manager's face and a promise was extracted from Prof Tilyard not to take an iPad to the bathroom to read group accounts.

Southlink was also establishing a recruitment service, targeting young New Zealand and overseas graduates, to fill in when the group's doctors wanted to take leave.

A call centre operated from the Southlink offices to provide support for the doctors.

A tour of the two floors Southlink occupies in Burns House showed a wide range of activities.

The group has its own software team to develop the programs Southlink uses nationally.

"I come down here and say: 'I have a dream, can you build it'. And they usually can," Prof Tilyard said.

Also, the group publishes a glossy magazine called bestpractice which is distributed to 10,000 health professionals every six weeks. A team of medical writers is employed by the group to provide content.

Prof Tilyard, in keeping with his desire to keep things local, awarded the printing contract to Dunedin's Southern Colour Print.

"We could have got it cheaper in Auckland but why go to Auckland if you don't have to?"