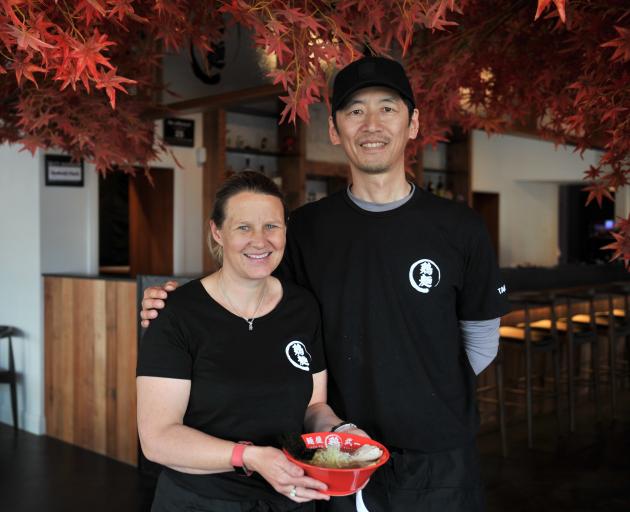 Gillian and Yuya Sugiyama with a bowl of ramen in their Takeichi Ramen restaurant that opened last night. PHOTO: CHRISTINE O'CONNOR
A collapsed roof, seismic strengthening and Covid-19 disruptions put Gillian Sugiyama on a long and winding road before opening her Takeichi Ramen store.

The restaurant had its first opening to the public last night after a soft opening the night before.

Mrs Sugiyama, who will run the restaurant with husband Yuya Sugiyama, said there was a lot of interest from the public about the store, which is in the building that used to house Branson’s Bar, next to the Dunedin bus hub.

She had had to regularly tell hopeful patrons waiting outside it was not yet open, but that finally changed last night.

The restaurant had been in the works since late last year, and Mrs Sugiyama said it had not been easy.

"You’ve just got to work with it and it is what it is."

They were still putting in the last of the floor tiles yesterday morning before opening later in the day.

The restaurant would have an authentic Japanese feel — with guests greeted in Japanese when they walked in the door as well as artificial Japanese maple trees.

"You get hot hand towels, origami paper with instructions and nice friendly service ... and a hot bowl of ramen," Mrs Sugiyama said.

In Japan, ramen was often eaten "on the go", but at their restaurant it would be a longer affair.

"We didn’t want that here. We want people to hang around for an hour or couple of hours."