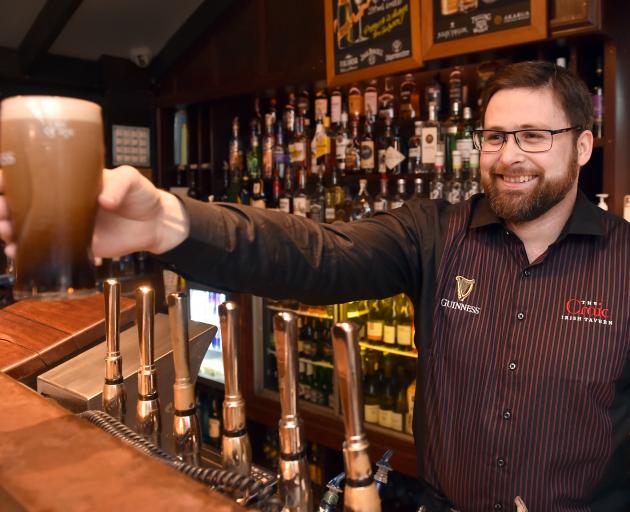 Bruce Hoffman, duty manager at Craic in the Octagon, pours a beer yesterday. PHOTO: PETER MCINTOSH
Bar owners in the South say they face a long road ahead, despite a good start when bars opened their doors on Thursday after being closed under alert level regulations.

Speight’s Ale House operator Mark Scully said his books were down about 70% on last year but it was too early to say whether he would look at cutting back staff.

"We haven’t made anyone redundant yet and we’re attempting to keep our roster as normal as possible while we have the wage subsidy."

The next few weeks would be crucial for the industry and if business did not pick up "there’s going to be an awful lot of redundancies ahead of us", he said.

After opening on Thursday there was a "nervousness" among patrons and many who came to dine were getting out quickly.

He hoped people would start to feel more comfortable about going out for a drink with their mates.

"Hopefully, over the weekend, people will get back in their more familiar surroundings and come in with their workmates and friends."

"Everybody that came in was really happy to be able to come in and just have a beer.

"We actually did quite a lot of food as well, which is great."

Like Mr Scully, she said the next few weeks would provide a better picture of how patrons were feeling.

The lack of events would hurt bars and it would also be impossible to have people dancing with live music — normally a popular feature at The Craic, she said.

It would be tough "until we get to the point where we can trade pre-Covid, for example people coming up to the bar on a Friday or Saturday night and getting up for a dance — everybody in the industry will tell you that’s what pays the majority of the bills.

"Until we can get back to that form of trading then it’s going to be tough for all of us — there’s no two ways about that."

The Craic was planning on having "low-key acoustic" music for patrons.

She was looking forward to more restrictions being lifted and the country moving "to a Level 1.5 maybe or Level 1", in the coming weeks.

"It’s what we’d all want in the industry — it’s been a tough time," Ms Grenfell said.

Republic Hospitality operates eight Queenstown venues and its managing director, Mike Burgess, said it was still early days but he was happy to see a "flash of enthusiasm" on what was a cold Thursday evening in the resort.

"We were quite encouraged by what we saw [on Thursday] night."

The business was still being propped up by the wage subsidy and mortgage holidays — which would end at some point.

"I still think we’ve got a way to go until we find out the new normal for our Queenstown economy."

He hoped when support mechanisms ceased, they would be "counteracted" by rising visitor numbers.

That would come with a transtasman bubble and domestic tourists who could not holiday abroad, he said.

A survey conducted by the Restaurant Association revealed more than 45% of its members nationally had experienced significantly reduced revenues since reopening their doors.

Just 3.5% of members said their turnover was similar to what it was before Covid-19.

Restaurant Association chief executive Marisa Bidois said additional financial support, mentoring and marketing would be important for the industry as it rebuilt.

The association has created a recovery task force and is focusing on training and mentoring operators to help business recover over two years.

Ms Bidois said hospitality businesses needed a lump sum cash injection to assist with overheads, lease assistance and wage subsidy extensions to be granted to those with 30% losses instead of the indicated 50% threshold, to get through the crisis.